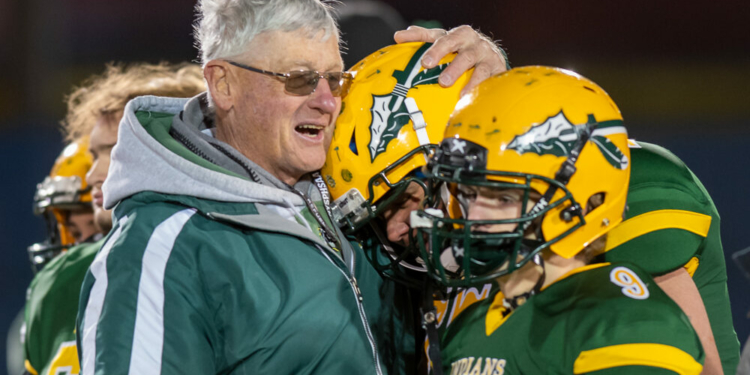 MIDDLETOWN — The Ravena-Coeymans-Selkirk football season came to an end after a hard-fought game against Pleasantville in the Class B state semifinals.

The Indians found themselves down at the half 9-0 after the Section I champs from Pleasantville returned a punt for a touchdown and then got a safety after RCS fumbled in its own end zone.

Late in the third quarter, quarterback Luke Misetich hit Ryan Southworth over the middle and the senior broke a tackle to turn it into a 58-yard touchdown. The extra point by Southworth was good brining the Indians to within two points heading into the fourth quarter.

Pleasantville struck first in the fourth on a 1-yard run, but the kick failed and RCS was down by eight. With just more than two minutes left, RCS drove the ball to the Pleasantville 9-yard line, but were stopped just short of getting a first down to continue the drive. Pleasantville took over on downs and ran out the clock.

Pleasantville, which did an outstanding job of stifling RCS’s formidable running game, will play the Section VI champs from Maine-Endwell at the Syracuse University dome.

The only Section II team still in the mix for a state championship is Schuylerville, who crushed the Section I champs from Dobbs Ferry 52-14 on Saturday in Middletown. The Horses will play for the Class C title against Section IV champion Chenango Forks on Saturday, Dec. 4.

RCS won its first Section II title since 2004 by beating Gloversville on Sunday, Nov. 14, 33-14. The team then beat Peru, the Section VII champs, 39-21 in the state quarterfinals. Indians finish the season under longtime coach Gary VanDerzee 7-2 in conference play and 9-3 overall.