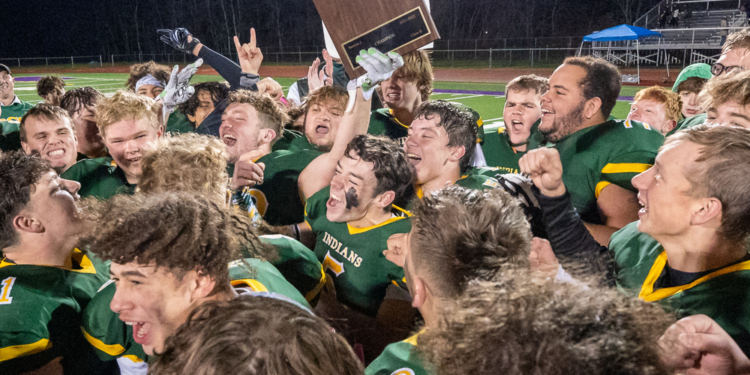 COLONIE — Ravena-Coeymans-Selkirk won its first Section II championship since 2004 by rolling over the Huskies from Gloversville 33-14 on Sunday, Nov. 14.

RCS scored five unanswered touchdowns through the first three quarters on one big play after another in the Class B showdown at Christian Brothers Academy that was delayed a day because of bad weather.

“We have some great skill kids,” said longtime RCS coach Gary VanDerzee. “Luke as quarterback just came in the last of couple games and he has the abilities that allow us to spread the field a little better.”

“It just feels so good. This is the first win since before I was born and I would not want to do it with anybody else. We worked so hard all year and everybody played hard today and everybody did such a good job. I am so proud of all of us,” the junior QB said.

“It feels great. I would not want to have a better team than this. We dedicated ourselves to a championship this year and we went out and did it,” said senior tailback Xavier Bermudez, who caught what ended up as a 99-yard touchdown pass to open the scoring.

RCS will play Peru, the Section VII champion, in the state regionals at CBA on Friday, Nov. 19.

Gloversville started out strong on the opening drive but RCS picked off the ball at the two-yard line. Two plays later, after losing a yard, Misetich hit Bermudez for the 99-yard touchdown that set the tone for the next two and a half quarters of play.

On the next possession for RCS, Frank Broadhurst broke through the Gloversville defense for a 54-yard touchdown score. Both extra point conversions were no good but RCS had a 12-0 lead heading into the second quarter.

In the third, Misetich threw his fourth touchdown of the game on a 31-yard pass to Paljusaj.

Gloversville clawed back to make the final respectable on two touchdown runs by Giorgio Glionna, who also kicked both extra points.

VanDerzee has been the RCS coach since 1983, the longest tenured football coach in the Capital District, and has led the Indians to 10 Section II title games and four Class B championships.

“It never gets old,” he said. “This is a great group of kids and they put in the effort. Before the game, we took the time to go into the gym and count the banners of section championships won by boys teams and the fact we could put on up there I think resonated with some of them.”

Knickerbocker Arena will be the MVP Arena