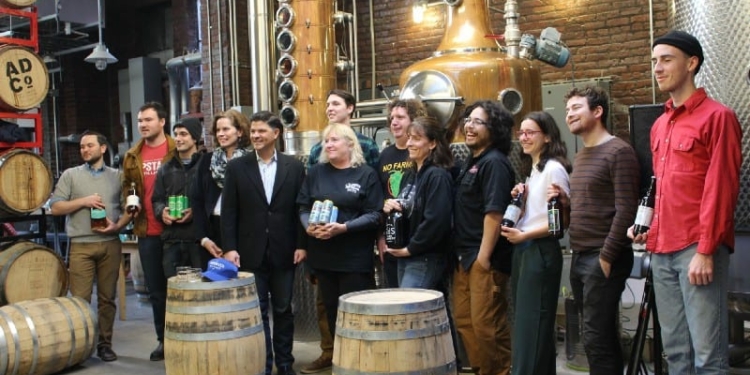 Presently, farm distilleries can sell farm beer, wine, and cider by the bottle, but not for on-premise consumption. Last year, Gov. Andrew Cuomo signed legislation, also sponsored by Senator Amedore and Assemblymember Fahy, allowing farm cideries to serve beer, wine, and spirits by the glass, in addition to related legislation that allowed the same privileges for farm breweries and wineries.

“This is a great day to be in Albany supporting small  businesses,” said Amedore, standing in front of a large copper still at Albany Distilling Company in Albany as Cooper the cat wandered by, unimpressed. “The craft beverage industry continues to expand, and we want to give these small businesses every opportunity to grow and succeed. Cross promotion of other New York produced beers, wines, spirits and ciders is a great way for these businesses to continue to thrive, and at the same time, introduce customers to even more of the great products our farm-based craft beverage producers have to offer.”

“Craft beverage production has grown exponentially in our region and this bill encourages cross collaboration between distilleries, wineries, cideries, and breweries. This is common sense legislation that will remedy parity between the farm beverage producers,” said Fahy.

“And it’s not just about the distilleries, the cideries, and the wineries and the breweries,” she said. “This is about growing small businesses; this is about supporting our agriculture industry and this is so good for the environment.”

“We are small businesses that support New York State agriculture,” said John Curtin, co-founder and co-owner at Albany Distilling Company and president of the Capital Craft Beverage Trail Association, “and this legislation would go a long way in helping our farm distilleries to succeed.”

Pointing out that other state craft beverage industries no longer face the same restrictions, Curtin demonstrated by opening a bottle of local farm-crafted beer and pouring out a three-ounce sample that he said he was allowed to give away for free under current law. Once the glass was filled, however, he said, “I have to dump this down the drain now, because it would be illegal for me to serve this — even though it is a New York state product, made right here in the Capital District from New York state grain and ingredients.” Calling it “an unfortunate truth,” Curtin then emptied the glass into a nearby sink.

“New York’s farm distilleries continue to grow,” he said, “and we would greatly benefit from having the same opportunities that farm breweries, cideries, and wineries currently have.”

“This is great news. We appreciate the hard work of Assemblywoman Fahy and Senator Amedore in continuing to build New York’s farm beverage industry,” said Dietrich Gehring, co-owner of Indian Ladder Farmstead Cidery and Brewery. “We sell the Albany Distilling Company’s products as well as those of other local distilleries in the tasting room on our farm in Altamont. We are so happy that the Albany Distilling Company will hopefully soon have the opportunity to sell our beer and hard cider at their facility in downtown Albany.”

“There’s been significant growth in craft distilling in New York State. Teaming up with all of our fellow craft cideries, breweries and wineries will only strength our industry. I look forward to carrying products from local partners in what I consider to be a great progressive industry,” said Ryen VanHall, founder at Upstate Distilling.

“Thanks to the continued leadership of Senator Amedore and Assemblymember Fahy on issues that relate to the craft beverage industry,” said Matthew Jager, co-owner of Yankee Distillers. “As a farm distillery, we would love to profile and promote other farm producers in the Capital Region and this bill will be a huge step in the right direction.”
Tags: Albany Distilling Co.craft beverage legislationGeorge AmedoreIndian Ladder Farmstead Cidery and BreweryNew York statePat FahyUpstate DistillingYankee Distillers
ShareTweetShareShare
Previous Post