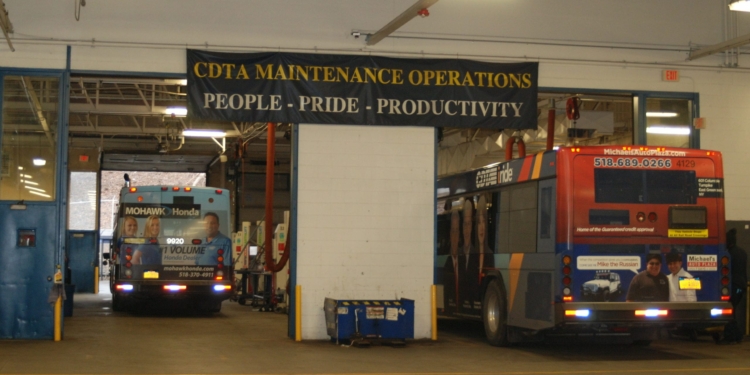 Touting progress and partnership, the Capital District Transportation Authority (CDTA) launched its new $10 million smart-card prepayment system, Navigator, on Thursday, Jan. 12, during a news conference at its headquarters in Albany. Employees, collaborators and officials gathered in the bus garage at 100 Watervliet Ave. — decorated in blue and white for the event — and snacked on popcorn and donuts as officials introduced Navigator and highlighted CDTA’s tech trajectory.

“Over the past decade, CDTA’s Board of Directors has set forth a vision for CDTA to be innovative, inclusive and to serve as an industry leader,” said CDTA Board Chairman David Stackrow. “Today’s announcement highlights one of the key projects in that vision. Our Navigator smartcard prepayment system is changing the way the Capital Region looks at transit.”

The Navigator system, which CDTA has been piloting for the last year, uses a durable plastic card onto which riders can pre-load bus fare. The card is waved over the bus farebox and the fare is automatically deducted. At $1.30 per ride, Navigator users on the Pay-As-You-Go plan save $.20 per ride and are only charged for a maximum of three rides per day. Alternately, Navigator users can choose to pay a flat $65 for a month of unlimited riding under the Frequent Rider plan, which is essentially identical to CDTA’s 31-Day Rolling Swiper card.

“We truly are a regional economy,” said Mark Eagan, CEO of the Capital Region Chamber of Commerce, who noted that nearly $30 billion has been invested into the region over the last decade. “CDTA has been a true leader and innovator in our community.

“Libraries are about the sharing economy,” said Scott Jarzombek, executive director of Albany Public Library, which partnered with CDTA to test and retail the new system. “By partnering with CDTA to sell Navigator passes to bus riders, and giving numerous passes to our staff, the library was able to do social good while having a positive economic and environmental impact on the community.

“The fact that every one of our seven branches is on at least one CDTA bus line is important to our patrons,” he said. “Many of the people who visit the library every day get there by bus. Allowing them to buy and replenish Navigator bus cards at our locations simply makes their life easier.”

Currently, cards can be purchased and replenished at all Albany Public Library locations, as well as online, by phone, at CDTA’s customer service center or at CDTA retail outlets, such as the Empire State Plaza Visitor Center and Gift Shop, Price Choppers in Bethlehem and Glenmont, and Regina Check Cashing locations in Albany, Troy and Schenectady. Next fall, after pilot testing in the spring, CDTA expects to launch a smartphone app so that Navigator riders will be able to reload their cards from anywhere.

“We’ve come a long way in three decades,” said CDTA CEO Carl Basile, who began his career with CDTA mapping bus routes 35 years ago. “The biggest change in my career at CDTA has been the infusion of technology and the way we’ve accepted it and rolled with it to help people who want our services and need our services.” Gesturing around the spacious, well-lit bus garage, he said it hadn’t always been that way. “Most of what you see around you is technology-driven.

CDTA now has more than 200 busses, each of which costs approximately $450,000. “I’m often reminded,” said Basile, “that, at the end of the day, this is still a business of tin cans on wheels. Technology drives it, but human beings are responsible for our success.”