by Spotlight News
in Crime, News
0 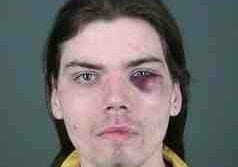 ALBANY – A city man was sentenced to 10 years in prison for chopping off another man’s finger with a machete.

According to District Attorney David Soares, Sherman attacked a man with a machete during the altercation, chopping off his finger and injuring his shoulder.

The victim was treated and survived.

Sherman, who was sentenced by Judge Thomas Breslin, will serve five years on parole after his release from prison.