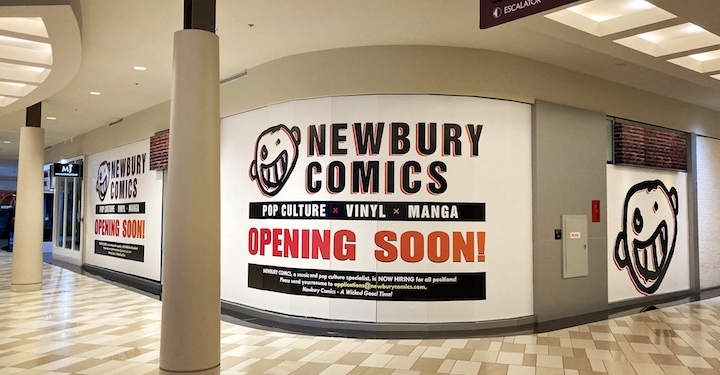 GUILDERLAND — With its mantra that promises Capital District shoppers a ‘wicked good time,’ Newbury Comics will open its doors in Crossgates Mall later this year.

“We are thrilled to be opening our sixth store in the state of New York and excited to bring our unique selection to the Capital city!” said Newbury Comics Executive VP Valerie Forgione.

“It is our goal to bring fun, popular culture to Albany and to be a place where like-minded folks can gather and share experiences,” said Director of Marketing at Newbury Comics, Amy Dorfman. “Our store is a bit of an adventure; new items arrive weekly, and walking through our store can be a journey of discovery! If you’re into Manga, Vinyl, or Pop Figures, we carry a deep selection for the avid fan.”

“Newbury Comics has also pressed hundreds of exclusive color vinyl releases, with new titles out every month. For the card gaming or fantasy enthusiast, we sell Magic, Pokemon, D & D, and other related items. And for the collector, we carry loads of blind boxes, comics, graphic novels, and action figures,” she added.

For those looking to accessorize their wardrobe with fresh new items, Newbury Comics provides T-shirts, jewelry and cosmetics in a variety of styles from punk to pop-culture.

“We are a purveyor of popular culture and make it our mission to bring in the latest trends as they break,” said Dorfman. “So if you’re into movies, TV, fantasy, anime, gaming, or music, or are just looking for a unique gift, we have something for you!”

The new store debuting in Crossgates will be Newbury Comics’ 31st location as they commemorate their 43rd anniversary this year. Early October is the anticipated opening date for the store, which will be situated close to AT&T on the center’s bottom level.

“You won’t find another one of their stores here in the Capital District, so we’re excited to be able to introduce them to first time shoppers as well as to those who already know & love their store!” Crossgates Marketing Director, Jennifer Smith said.

In 1978, two Massachusetts Institute of Technology students named John Brusger and Mike Dreese established Newbury Comics in Boston. Since opening its first store, the New England-based retailer has opened up thirty more across the nation. The business believes in their personal motto that they are ‘the fun part of people’s lives’.

“We look forward to meeting new people and sharing our passion for the things that make life fun,” said Valerie Forgoine. “Get ready Albany, we can’t wait to welcome you to the fantastic world of Newbury Comics!”