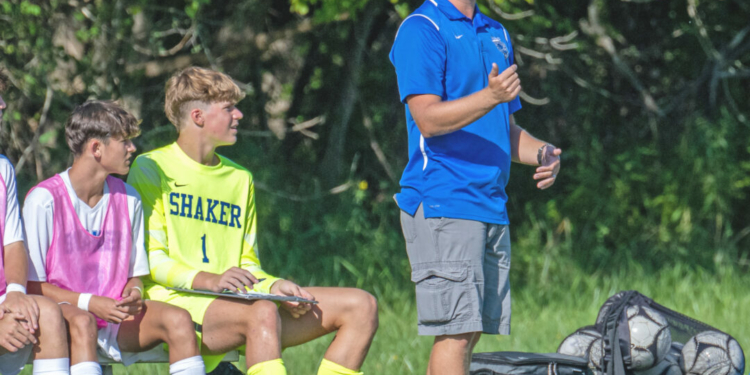 Dan Fountain is in his 11th year as the Shaker boys varsity soccer coach. In that time, he has accumulated the most wins of any coach in Shaker soccer history. He is also director of player development and U16 boys coach at Latham Saints FC.  As a player he was a three-time First Team All-Star at his high school in Buffalo and played college soccer at SUNY Oneonta. He is a history and economics teacher at Shaker High School and lives in the North Colonie district with his wife Kayla and his two sons Lincoln and Walker.

Q: You have been involved with soccer for a long time. How has the game changed since you first started playing?

A: My soccer career began when I was 3 years old and my parents enrolled me at the local YMCA. I have great memories of my dad and I driving to soccer games and then stopping to get Ted’s Hot Dogs (in Buffalo,) or my mother taking me to a game and stopping to get Dairy Queen after, or just kicking the ball around with my brother after school. Soccer has been a major part of my life ever since. Obviously, much has changed since I started playing, but more has stayed the same. I think it is a great experience for not only players, but their families. The largest change I have seen though is the expansion of soccer in America, which is fantastic. When I was a kid the only soccer you could watch was the world cup, and occasional big games from other competitions. Most kids did not play soccer, they played other sports. Now soccer is on TV all the time and so many kids play soccer. It is great to see the sport growing in this county, and in the Capital District, and knowing that more kids will get great memories like I have. I really think the turning points were the U.S. men’s team hosting the World Cup in 1994 and the U.S. Women’s team hosting and winning the World Cup in 1999.

Q: What do you try to instill in your players outside of soccer skills?

A: The saying all of my players hear me say, from U8 to varsity is we play soccer to “Have Fun and Get Better.”  If we are not having fun, then why are we playing? If we are not working to get better, then what is the point of training? I try to instill that philosophy not only in soccer, but in life. We need to enjoy our lives, and we need to work on being better today than we were yesterday. I tell them I try to be a better father, husband, coach, teacher, friend, neighbor, and enjoy myself in all the different roles I play every single day.

Q: Soccer is a physically demanding sport with a lot of contact, no time outs and probably more non-stop running than any other sport. How do you condition athletes for such a grueling contest?

A: Soccer players have to be complete athletes, from great cardio to explosive power. Bodyweight exercises are really the key for soccer players. If you look at what famous soccer youth academies do around the world, it is all explosive bodyweight exercises and short sprint work. Probably similar to HIIT (high intensity interval training) that is becoming more mainstream in exercise today. On top of that, the best way to acquire match endurance is to gain fitness while playing soccer. There are methods to modify drills in practice to increase the running and physical demands on the players. That way they are improving their fitness while working on their soccer skill.

Q: What characteristic does any successful athlete possess?

A: There are obviously many characteristics that are important, but if I had to pick one it would be a desire to improve. Many good athletes do what their coaches and teammates ask of them, the great athletes have an internal drive to get better beyond what is asked of them. They watch film, ask their coaches what to work on, and run on their own. Mia Hamm, one of the greatest soccer players of all time, said she got a note from Anson Dorrance (UNC Soccer Coach) that sums up that work ethic: “The vision of a champion is someone who is bent over, drenched in sweat, at the point of exhaustion when nobody else is watching.” Players who have that mentality will always be successful.

Q: You are barefoot during every game — regardless of the weather, which can get nasty during the fall in upstate New York. Why go shoeless?

A: In my defense, if the weather is too cold I do wear boots! When I was a young player I had a coach tell me the best soccer players in the world grew up playing street soccer barefoot. If you do not kick the ball correctly, or let the defender step on you, it hurts when barefoot! I played a lot of soccer barefoot to try and emulate some of the greats. By coaching at practice barefoot it just naturally led into coaching games barefoot. Now I am just more comfortable feeling the grass under my feet for the big games.

If you would like to see someone featured in Five Questions contact Jim Franco at [email protected] or 518-878-1000.