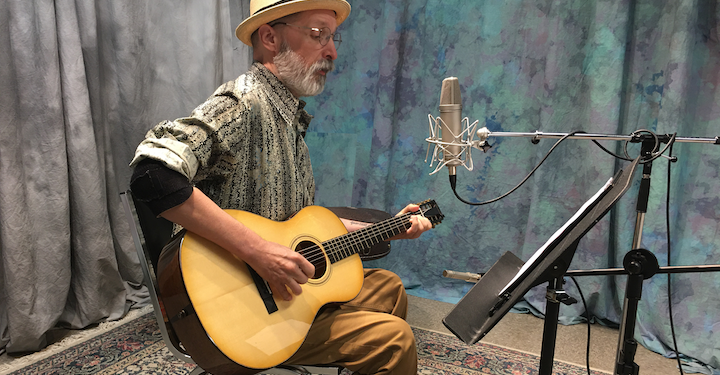 SARATOGA SPRINGS — Michael Eck was ushered into a music career by thunderous applause following his first live performance in a high school gymnasium 40 years ago.

It was Friday, Oct. 1, 1982. Eck played electric guitar with a hardcore punk band named Deaf Zone in a battle of the bands at Bethlehem Central High School. They opened the set with The Clash’s “Should I Stay or Should I Go.”

“This is jogging the memory banks,” Eck said from the other end of the phone. “If we won,  which at first we thought we were gonna because the applause was so freaking loud — we found out later there was like three people applauding for us,  but it seemed loud to us because we never heard applause before — the only option we had, if we won, was we’re gonna play ‘Louie Louie’ for like 45 minutes.”

He’d follow through on the “Louie Louie” feat later in life while performing at a charity event in Troy’s Positively 4th Street.

Eck hardly resembles Mick Jones today, when he’s apt to play American roots music with the Ramblin Jug Stompers at a local library in his ever-present pork pie hat. But the music historian is quick to point out a Dave Van Ronk album from 1963; you’ll recognize the name, “New Ragtime Jug Stompers.”

Eck’s fingerprints are all over the Capital District’s fretboard. From the dozen or so bands to which his name is tied, to the Times Union who carried his byline as he covered the arts for several years. On his forearm is a large tattoo of an Olivetti manual typewriter, which is how he continues to write.

“If I had to define myself by one word, it’s writer,” Eck said. “I think that encompasses all the different things I do.”

He fondly recalls memories of rushing to the record store before concerts at Saratoga Performing Arts Center with his friend, the late Greg Haymes. The two would copy down song titles from the bands’ latest albums to help with their concert reviews. The work started before the musicians took the stage, and to make deadline, the articles were often filed before the music ended.

A Signature Artist with Weber Fine Acoustic Instruments, Eck is the only member who, as a longtime nationally published cultural critic, is also a voter for the national Rock & Roll Hall of Fame, in Cleveland. His contribution to the local scene was rewarded this June when he was inducted into the Capital Region Thomas Edison Music Hall of Fame.

Last February, the 58-year-old had a stroke. Stuck in a hospital for a month, he said he was grateful the staff allowed him to play guitar. Doctors told him the connection between his brain and his handwork on the instrument helped with his recovery. He said the stroke has “made me old before my time.” It’s robbed some of his dexterity, making it difficult to place his fingers higher on the neck. But he’s still able to play, and his bandmates have continued to encourage him.

“You know, I love to perform and since my friends and the bands are willing to drive me to gigs and stuff, that’s cool,” he said. “I don’t go to anywhere near as many concerts as I used to, but I still try to go.

This Sunday, Sept. 25, Eck is to celebrate 40 years in live music on the Caffe Lena stage, a place he said he considers his spiritual home. He’ll be joined, on a select number of show-closing songs by his adult children; Lakota Ruby-Eck on guitar and Lillierose Ruby-Eck on violin.

He’ll perform select songs from his four albums, plus new material audiences have yet to hear. The show will also be a release party for Eck’s fifth solo album, “Your Turn To Shine—New Songs, Live At WEXT.” Physical copies will be available on disc at the event, with digital distribution to follow. The title bears witness to the fact most of the dozen selections were played live for the first time, in any context, at public radio station WEXT.

“So in a way, I’ve led a really boring life because it’s always been about music and live performance, whether I was witnessing it or doing it,” Eck said, musing on days busking on the streets of Austin and New Orleans. “But I can’t imagine a life that’s more exciting than being invested in that.”