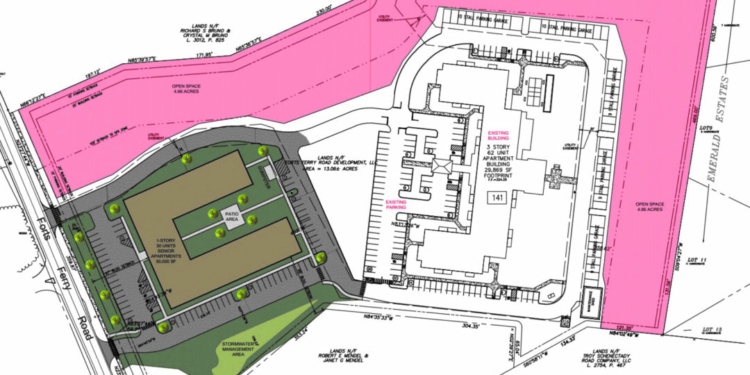 COLONIE —In 2018, the developers of a senior housing complex on Forts Ferry Road were approved to construct a three-story, 90,000-square-foot 62-unit apartment building and a two-story, 30,000-square-foot office building.

The senior housing complex is complete and filled to capacity. At the last Planning Board meeting, the Hodorowski Group introduced a plan to pull the office component and construct a one-story, 30,000-square-foot building with 30 more housing units designated for seniors.

The plan would require a Planned Development District, which allows the developer to bypass existing zoning regulations and, generally, allow more density than the underlying regulations would allow.

“A PDD allows a unique zoning classification for the property based on a very defined development plan and a defined layout and a defined density,” said the Town Designated Engineer Joe Grasso. “As we entertain a PDD it brings back those issues the Planning Board worked through on the previous plan and, even further, the things the PB no longer had to review under a PDD like density, a public benefit and allowing the site to be developed that is inconsistent with the underlying zoning.”

The project has a long, convoluted history that includes significant and staunch opposition from the surrounding single family residential neighborhoods.

A year before the mixed use was approved, developer Frank Nigro proposed a 110-unit senior housing project that would have also required a PDD in the Office Residential zone. The project was ultimately pulled, and the mixed use project was proposed and approved that was compliant with the existing zoning. An OR zone allows 80 percent commercial and 20 percent residential, and commercial requirements can be exchanged at 3,000-square-foot per one-foot of residential space.

One of the issues the neighbors had throughout was traffic. Without going into details, Grasso said senior housing does generate significantly less traffic than an office building and it is spread through the day rather than condensed during the start and end of a typical work day. According to the narrative submitted to the Planning Board, the number of trips generated by the senior housing is 53 percent less than that generated by an office building.

At the last Planning Board meeting, Hodorowski introduced his plans to construct more housing rather than the office building as a sketch plan so the public is not typically allowed to comment. Given the project’s controversial history, though, Acting Planning Board Chairman Craig Shamlian, did allow the West Latham Neighborhood Group to briefly weigh in.

“We are here to find out more and we will be meeting with him. That is a lot better than we had,” said a representative of the group. “We like the concept of one story. I think it works much better than an office building and, like you said, there is not a lot of traffic.”

Jamie Easton, a civil engineer working for Hodorowski, said he has contacted the neighbors and plans to work with the neighbors to “understand their concerns” and revise the plan based on those comments as well as any concerns brought by the town.

“The first step is understanding everyone’s concerns,” he said.

The original building was two stories, he said, and was 100 foot from the neighbors’ property lines. He said he designed a building as U-shaped with a courtyard for the seniors to enjoy, moved the parking further away from the neighbors and reduced the size of the building from two- to one-story. The proposed project would have less impacts on town services like sewer and water than the project that was previously approved, he said.

The proposed units would be mostly one bedroom and average about 1,000-square-foot, which is smaller than the newly constructed 1,500-square-foot units in the existing building.

The board, generally, were more amenable to the exclusively residential plan than having the office component built alongside the senior housing.

“Those of us who were on the board did not love the fact there was an office component to this but that is what the zoning required,” said Shamlian, who was on the board during the last iteration. “Pending discussion with the neighbors, it will be very interesting to see what you come back with.”

The plan will have to go through a number of procedural stages including the Town Board approving the change in zoning from OR to a PDD and the approving a public benefit, which is required for any project that requests a PDD. The benefit can be between $3,000 to $6,000 per unit, Grasso said.

It must also come back before the Planning Board at least two more times for site plan reviews.

My Place & Co. to celebrate 40 years with outdoor tent party on Saturday