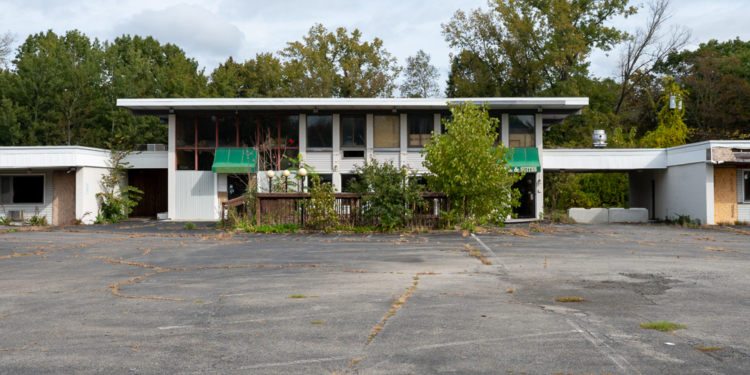 The project by North Country Motor Car Group would raze the former Cocca’s Hotel and Suites at 979 Troy Schenectady Road — which included the Otis and Oliver’s Restaurant — to make way for a Porsche and Lexus dealership and a three-story parking garage used primarily for inventory for the vehicles that can cost six figures.

The parking garage would have 76,500 square foot of space and be located behind the Lexus building and because it will be “benched” into the existing slope only two levels will be visible from Route 7 and most of that would be hidden by the taller Lexus building. A parapet would be constructed on the upper deck to hide vehicles and make it more aesthetically pleasing.

Access and egress from the busy Troy-Schenectady Road is an issue. One of the two current curb cuts would be eliminated and the one remaning would be modified to include one ingress and two egress lanes. A second curb cut would be restricted to right hand out turns only. The sidewalk and curbing along Route 7 would be replaced and the bus stop would be removed.

According to a traffic study conducted by Creighton Manning, the two dealerships would generate 149 new vehicle trips at during the afternoon peak travel hours. That represents 106 more trips than occurred under the property’s former use as a hotel and restaurant. The state Department of Transportation, according to the study, estimates there are 3,500 vehicles in that area of Route 7 during the afternoon peak hours. With 40 percent of the traffic travelling to/from the east and 60 percent travelling to/from the west, “it is anticipated the site will generate 45 or fewer trips to any intersection approach during the p.m. peak hour.”

“This equates to approximately one car every minute during the peak commuter time period,” according to the study commissioned by the developer. “There is adequate capacity at the adjacent intersections and the segment of NY Route 7 adjacent to the property site to accommodate new traffic associated with the proposed development.”

There is a sewer main running along Route 7 along the front of the building and as such the ability to plant trees is limited. The plan is to install stone columns with a black, decorative metal fence and accent that with shrubs, said Victor Caponera, an attorney who presented the plan on behalf of New Country.

Keeler Motor Car Company, located to the east of the proposed Lexus and Porsche dealership, is currently in the process of moving a large expansion through the planning process and the route taken during test drives was brought up by neighbors.

“We have an issue with the dealerships on Route 7 taking test drives through the neighborhoods and at some point you will have to address the fact your dealerships, if nothing else, will make every attempt to not have test drives on Buhrmaster Road, Mill road, Forts Ferry Road,” said Planning Board Chairman Steve Heider. “That is the primary run for four dealership one block up from you and it has created a tremendous amount of consternation. I’d be surprised if we don’t hear from some of the neighbors.”

A representative from New Country said it is already under discussion and test drive routes will avoid those neighborhoods.

Cocca’s closed in 2015 and the family sold the land to New Country, a Saratoga-based car dealership with outlets across New York as well as lots in Connecticut, Maryland, Pennsylvania and Florida. Dealerships specialize in Audi, BMW, Ferrari, Lexus, Maserati, Mercedes-Benz, MINI, Porsche, Toyota and Sprinter vehicles as well pre-owned vehicles of nearly every make.

In 2019, New Country gave the Verdoy Fire Department, located across Troy Schenectady Road from the rotting motel, permission to use the structure as a training facility.

The proposal to build the two new dealerships will have to come before the Planning Board at least once more for final site plan approval before construction can begin.

Bethlehem Central Board has budget plan for May vote