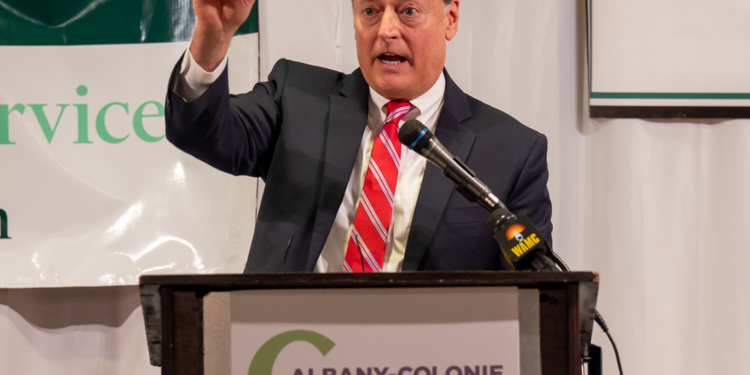 Supervisor Peter Crummey gives his first State of the Town Address during the Albany-Colonie Chamber of Commerce breakfast at the Century House. Jim Franco / Spotlight News

COLONIE — Supervisor Peter Crummey, in his first State of the Town address, re-emphasized his campaign pledge of focusing on parks and technology and said the town should open its own senior services center.

He called the number of dead cell phone spots in a centrally located town the size of Colonie “pitiful” and hinted at making changes to zoning laws to allow an easier path to consistent connectivity than the unsightly and often unpopular cell phone towers.

The first Republican to hold the town’s top spot in 14 years — after defeating Kelly Mateja in November, 2021, by a comfortable margin — gave his address during the Albany-Colonie Chamber of Commerce breakfast at the Century House on Wednesday, March 23. He followed up with a second delivery at the Town Board meeting a day later.

Along the same technological line the town, he said, “will continue to modernize” operations including allowing residents the option to pay water bills online and offer “more complete electronic opportunities to facilitate the ease of use of town services by our citizens.”

“Credit card payments should be made available at entry points for our parks as well as for fees collected by the various town departments,” he said. “Also, new software has just been installed at the Colonie Town Golf Course to set up tee times for all patrons and to best organize and monitor the activity.”

The town does not have its own senior services center like the village or other municipalities in the area. The Colonie Senior Services Center does have three housing facilities with another being built and offers a host of services including dining and recreation. It is, though, despite its name, a private entity.

“As you may know, the Town of Colonie does not have a senior citizen center. A town of our size should have such a center,” he said “As we gather today, I ask all of you to join me in planning and establishing a Colonie Senior Services Center once and for all that will benefit our Colonie senior citizens. The center would serve as a hub for senior activities and advancements.”

The town does have a Senior Services Department, which offers a host of programming and services, but neither the location of a senior services center nor how it would be funded were revealed during the State of the Town.

During his campaign, the former longtime town judge stressed the importance of the 850 acres of town parks, in particular the Mohawk River Park, where the boat launch has deteriorated to a point where it can no longer be used.

“Our town river frontage is currently not accessible for watercraft, even though the park was originally served with a boat launch,” he said. “Colonie residents should once again enjoy direct access to the Mohawk River. The tennis courts there have been deemed unusable for too many seasons. We are renovating that area this year to provide new park opportunities to our town residents.”

Under Crummey’s direction, the Conservation Advisory Council will hold Earth Day activities at the park later this month with a focus on clearing cleaning the trails that weave through the woods of the park located off Route 9 that is also home to the town pool, many pavilions, a playground and the Latham Lassies.

Under a plan by Supervisor Paula Mahan, at least a portion of the tennis courts were to be converted into pickleball courts, a sport that is becoming increasingly more popular, especially among seniors.

Earlier in his 80 days in office, Crummey elevated Matt McGarry to commissioner of the Department of Public Works to replace the outgoing Jack Cunningham, and there is also a new highway superintendent, Tom Romano.

The condition of town roads has been a campaign issue for years and candidates on both sides of the aisle have made investing more money into paving and/or repairing the more than 300 miles of town roads a plank in their respective platforms.

“It is unquestioned that we must step up our highway maintenance. This year, we have embarked on the most ambitious town road repair plan in Colonie’s history,” Crummey said. said. “Clearly, there are more roads requiring assistance that we can wholly repair in one year, but you will see evidence of road work throughout the town from May 1 through mid-October.”

Given the upstate climate, maintaining roads is a difficult endeavor for any administration in any municipality.

“As we know, Mother nature is a difficult partner. When it rains it slows the paving process,” Crummey said. “Further we only get a five-and-a- half-month window of potential weather for successful work. I must tell you that I never had a job before that I prayed that it doesn’t snow in the winter and doesn’t rain in the summer.”

Another never-ending battle is maintaining the town’s system of water and sewer systems that include miles of aged pipe. Just the Latham Water District has 440 miles of pipe, two-thirds of which are made of brittle cast iron.

“We have neighborhoods that have sustained 30 breaks or more within a 10-year period. We are moving forward with pipe replacement in some of our most challenged areas,” Crummey said. “With the help of the Town Board and the department heads we are marching forward with long overdue repairs and replacement. Deferred maintenance is not our friend. Neither is record inflation, supply chain disruptions and the current cost of energy.”

In a bit of news, longtime Pure Waters Department Superintendent Crate Voerg is stepping down and moving to head up the pure waters (sewer) and water departments in the Commonwealth of Northern Mariana Islands, a U.S. commonwealth in the Pacific Ocean. His replacement has not yet been named.

He also tipped his hat to the other departments and to the Town Board, which is currently split with three Democrats and three Republicans. While the potential for political volatility is there, through nearly three months of the Crummey administration there has not been any indication of animosity, political or otherwise.

“I am pleased to hear that Supervisor Crummey remains focused on completing important projects commenced under the previous administration while suggesting new ideas and keeping public safety a top priority, to name a few,” said Town Board member Melissa Jeffers, the senior Democrat on the panel. “Hopefully, we can continue working together to ensure Colonie remains the best place to live, work and raise a family for generations to come.”

The supervisor has said in the past, and reiterated last week, that the voters elected him to lead and make decisions and he is ready and willing to make his mark like past supervisors.

“Today, I am humbled to serve in the same office where legacies have served including those supervisors I knew and worked with, William Sanford, Fred Field, Mary Brizzell and Paula Mahan,” he said. “Often for me, the position of supervisor can be similar to the position of serving as a judge. I make countless decisions every day by marshalling the facts available, determining credibility and then taking action. As to taking action, Teddy Roosevelt taught us that, ‘the best thing you can do is the right thing, the next best thing is the wrong thing, and the worst thing you can do is nothing’”

POLL: Hochul has a huge lead, most voters want bail reform and are Yankees fans