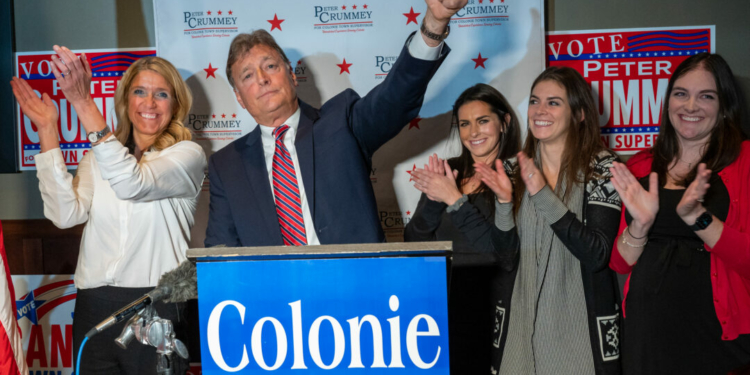 COLONIE — Former Judge Peter Crummey coasted to victory on Election Day and it appears Republicans will have the majority of the Town Board as well.

Crummey overcame a huge enrollment disadvantage — 23,775 to 14,732 with about 20,000 not registered in any party — to beat Kelly Mateja, a Democrat making her first run at public office.

The unofficial count according to the Albany County Board of Elections is 11,590 to 8,587, a spread outside the reach of more than 2,200 absentee ballots still left to be counted.

“To be here tonight to celebrate the margin of victory a positive campaign can produce is just amazing,” Crummey said during his victory speech at Bellini’s Restaurant after the results came in. “We will keep a sharp eye on the rest of the ballots, but from what I see we are ready for brand new leadership in Town Hall and I can tell you it is very exciting. And we appreciated all of the hard work all of you did.”

Crummey was a town judge for more than two decades and prior to that he was an attorney for the town Zoning Board of Appeals and an elected county legislator. He said he is ready to hit the ground running when he is sworn in on or about Jan. 1, 2022.

“I believe we enjoyed votes from all sectors,” he said of the enrollment disadvantage. “Colonie voters know me and they have seen me in action and they understand my experience and qualifications and they want me to put that to work for them and I will. Full time.”

His victory headlined what was a red wave in Colonie on Election Day and Republicans are back in control of the Capital District’s largest town after 14 years of Democrats running the show. Earlier this year, Supervisor Paula Mahan, a Democrat, opted not to run for an eighth term.

“I can’t tell you how fabulous it has been to work with this great team of candidates. They left it on the field day in and day out,” he said.

According to unofficial results from the BOE, Republican Jeff Madden got the most votes out of six candidates vying for three open seats with 10,114 votes. Republican Alexandra Velella had 9,617 and Democrat Melissa Jeffers, an incumbent, had 9,276.

If those results hold after the absentee count, the Republicans will have a 4-2 majority on the Town Board. Antonio Boncordo, a Republican, had 9,207 votes on Election Day so he does have an outside chance of getting by Jeffers which will make it a 5-1 majority.

Crummey ran on the platform of fixing roads and parks and maintaining other infrastructure while prioritizing public safety — police, fire and EMS — and keeping the tax rate in check.

“All year I felt an organic energy I have never felt before and I’ve run in a few campaigns and I’ve never felt that like this before,” he said of the margin nobody expected. “You wanted to believe it would translate into support and I believe it did. We had tremendous support from individuals, and business leaders and unions as well. It was a nice total package we were able to put together and all of that came together to put us over the finish line and with a significant margin of victory.”

Mateja used to work in the town’s Planning Department and now works in communications for the state Department of Aging. She is heavily involved in South Colonie schools and in 2011 began “Morning of Kindness” an annual Christmas Eve morning tradition that began as a way to keep her three children busy that has grown to attracting more than 1,000 volunteers getting together to help out local charities.

In a statement, she wished Crummey well as supervisor.

“I wish this had gone a different way, but I’m so thankful for the thousands of Colonie neighbors who believed in a stronger, better, more sustainable future for the Town of Colonie,” she said. “I’m filled with gratitude for the hundreds of volunteers who dedicated thousands of hours to meetings and phone calls and knocking on doors. I’m overwhelmed with appreciation for the amazing work of my team. And I hope the entire town joins me in wishing success for Mr. Crummey.”

If results hold, Republicans will have majority on Colonie Town Board