If results hold, Republicans will have majority on Colonie Town Board 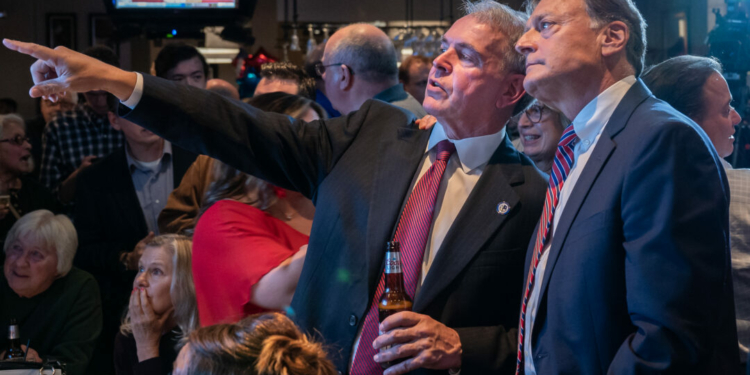 COLONIE — Two Republicans are the leading the race for three seats on the Town Board and come 2022, if the results hold after the counting of absentee ballots, the GOP will hold the majority and the supervisor’s seat for the first time in 14 years.

Republican Jeff Madden garnered the most votes of the six candidates running with 10,114, according to unofficial results from the Albany County Board of Elections. Republican Alexandra Velella finished Election Day with 9,617 and Melissa Jeffers, a Democratic incumbent, finished with 9,276.

If those results hold, the elected Republicans will join fellow party members Danielle Futia and Rick Fields for a 4-2 majority. Incumbent Jill Penn, a Democrat, was not up for election this year.

There are 2,876 absentee ballots that have been returned to the Board of Elections with 1,468 returned by those enrolled in the Democratic Party, 572 by Republicans and 647 by voters not enrolled in any party. Counting is expected to begin next week.

“I’m really, really excited and I appreciate all the people in Colonie who went out and voted for me. It was a humbling experience,” Madden said after the votes were tallied at Bellini’s Restaurant. “I left it on the field. I worked for it and I hope that had something to do with it.”

Five of the candidates running for board were making their first run at public office, including Madden.

“It was interesting,” Madden said of his first campaign. “You learn a lot about who works together and who doesn’t and you see things behind the scenes you don’t see as a normal citizen. It was different.”

Madden started his first Colonie business at age 23, Clean-All, a residential and commercial cleaning company. He also owned and operated the Colonie eateries All Sports Café and Madden’s. The Colonie High grad and father of three has been heavily involved in a number of youth sports and organizations including Colonie High football and lacrosse, Colonie Little League and Colonie Pop Warner.

The three candidates who received the most overall votes had the Conservative Party line in common. On that third party line, Madden received 1,298 votes, Velella got 1,284 and Jeffers got 1,206. Jeffers was the only Democratic Party candidate with the “C” line and was the only one who did not have the Working Families Party line.

Gamble and Mahar received 871 and 756 votes on the WFP line, respectively.

Velella grew up in Colonie and graduated from the Albany Academy for Girls before getting a bachelor’s degree from Manhattan College, a master’s from Pace University and a law degree from the Brooklyn Law School. Her law practice focuses on worker’s compensation, public sector labor law and municipal employee benefits as well as workplace accidents, deaths and occupational diseases. She moved back to her hometown of Colonie about two years ago.

When Jeffers was elected four years ago, she became one of the youngest members ever elected to the panel. The Shaker High grad has an undergraduate degree from Elmira College and a master’s from UAlbany. She worked as a paralegal for the Albany County Office of Immigration Assistance and currently words as a secretary to a Supreme Court judge in Albany County.

Prediction: There will be a new supervisor in Colonie