Empire Sealcoating hearing to continue in front of Colonie ZBA 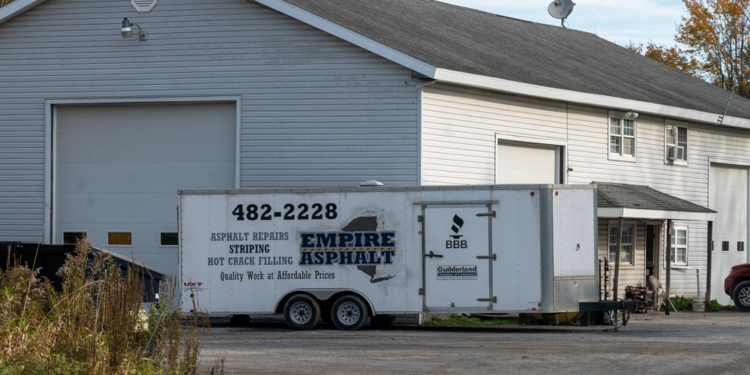 COLONIE — The saga will continue on Wednesday, Oct. 13, when the hearing over the appropriateness of Empire Sealcoating resumes in front of the Zoning Board of Appeals.

After nearly eight hours of testimony spread over three special sessions of the ZBA, the sealcoating company operating in a residential neighborhood rested its case in the trial-like hearing. The town did call a number of neighbors to the stand, who complained of truck traffic through their quiet, quaint neighborhood, and will continue to call witnesses on Wednesday.

At issue is whether or not Empire sealcoating was operating in a residential neighborhood under a nonconforming use or whether or not the business grew beyond the scope of the initial permits granted to Albany firefighter Ed Person in 2009. A decade later, the town yanked the Certificate of Occupancy and issued a stop work order for the business.

“You can’t take a way a man’s livelihood because some neighbors complained,” said Elaine Person, Ed Person’s mother. “That business was there before those homes. It was Cerone’s base of operation when he built those homes in that development.”

For decades John Cerone operated a contracting business at the site beginning in the 1960s, prior to the zoning regulations that limit use in the neighborhood to Single Family Residential. Person purchased the site in 2009 and was issued a nonconforming use permit based on a continuation of how Cerone was using the site.

Tragically, In 2020, while the businesses’ future was still in flux, Person drove to the site and committed suicide. His widow is operating the business now, albeit a scaled back operation, along with his former right hand man, Mike DePace.

“We would like the people of the Capital District to be aware of the town’s unscrupulous actions taken against a local hero veteran and his family,” Elain Person said. “If Empire Sealcoating, a legally operated, well respected business, who has abided by the town’s regulations, can just be shut down on a whim after 10 years, is any business in Colonie safe?”

Four neighbors testified at the last hearing and they spoke of a huge amount of truck traffic generated from the site. There is only one way in and one way out of the site from Sand Creek Road and that is through the quite neighborhood on Sunset Boulevard.

But, DePace contradicted the neighbors’ account of how much traffic and what types of trucks were entering and leaving the site.

Pam Tobin, who lives at 66 Sunset Blvd., the house right at the entrance of the business, said the traffic began to increase “significantly” in 2014.

“And when I say significantly, it became a 24/7/365. Easter, Christmas, 2 a.m., 4 a.m.,” she said. “We have a young granddaughter. She loves being outside and riding her bike in the driveway and we were concerned. The trucks would come flying out of that dirt road. It’s a life safety issue for us. There are a lot of children in the neighborhood and we have no sidewalks. There is such a thing as quiet enjoyment.”

She and other neighbors spoke of large tandem trucks going in and out of the site at all hours of the day and night. DePace, though, said there were no tandem-type tractor trailers and the traffic was not constant but based on the type of job the company was doing that particular day. He did say, there was some traffic at night, when there was a snowstorm or when the company had a commercial sealcoating and/or stripping job that was typically done off hours.

Elaine Person said the state was using her son’s land as a staging area when it was building Exit 3 on the Northway and said the neighbors could be confusing the truck traffic associated with that project with her son’s business activities.

“They claim they have photos but has anyone ever checked to see what the trucks were,” she said. “The state moved tons and tons of dirt onto his property and the trucks used his road to come in and out. He had 16 acres of his taken by eminent domain.”

His business sits at the end of a 1,600-foot dirt road and cannot be seen from the resident’s homes along Sunset Boulevard. The only spot it can be seen from any road is along the Northway near the Exit 3 flyover ramp.

So far, Empire Sealcoating’s attorney, Greg Teresi, called Robert Cordell, the town’s chief commercial building inspector who issued the initial nonconforming use permit in 2009, and Wayne Spenziero, who in his capacity as head of the town Building Department, revoked the CO and issued the stop work order in 2019.

Cordell said all he did was extend the current nonconforming use and Spenziero said he was acting on the direction of the town attorney’s office.

DePace also testified and did admit to the company expanding its operations from just sealcoating and striping of asphalt to asphalt repairs, landscaping, snow plowing and property maintenance.

Cordell said in his opinion it was still an appropriate use because Cerone used the property to perform those same types of tasks and the current permit was just an extension of that.

Assistant Town Attorney David Crowley is presenting the town’s case and he will continue on Wednesday.

If the ZBA rules against Empire and upholds the town’s decision to revoke the CO and issue the stop work order, Teresi said his client will take the case before a court of law.

There is also an effort, how serious is not known, to compromise and either swap Empire’s in a part of town zoned industrial or commercial or find another means of egress to the sealcoating site.