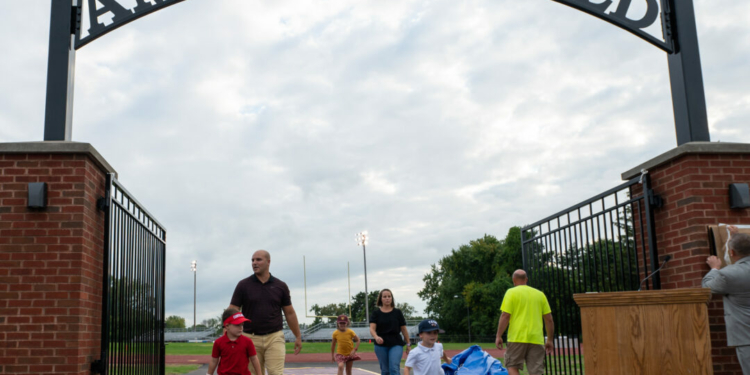 COLONIE — The spirit of Mike Ambrosio may have been looking down on the Garnet Raiders since his untimely death in 2019 at the age of 64. But now, the teams will too be playing on a field named in his honor.

And, the team won its first game playing on Ambrosio Field in thrilling fashion, coming from behind to beat Saratoga 13-12 just hours after an emotional dedication ceremony naming the field in the former coach’s honor.

“If he were here now, he would say ‘no, this is not for me. This should be for the kids.’ But there is nobody more deserving of this than Mike Ambrosio,” said Kevin Halburian, the longtime Colonie baseball coach, recently retired, and golf coach and former physical education teacher, who knew Ambrosio from his first days at Colonie High as the freshman football coach in 1988.

Ambrosio was a physical education teacher at South Colonie from 1985 to 2017 and he coached wrestling, track and lacrosse in addition to what he is best known and remembered for, football. For 33 years he coached at all levels and from 1997 to 2011 he was the Colonie High head varsity football coach where he led his team to three Super Bowl finals and won 12 of the 14 Colonie Cups as a head coach.

“I was his office mate for 30 years and the talks we had I will always cherish, about family, education, coaching, religion. He made me a better coach and made me a better teacher than four years of college ever could and a better person,” Halburian said. “A lot of coaches and teachers and people seek attention but Mike was never like that. He cared about the program and the kids. They always came first. He always said ‘the kids make the program, coaches don’t make the program.’ God Bless mike. God bless his family. I miss him.”

In 2020, the South Colonie Board of Education received a request to memorialize the varsity football field in honor of the coach and teacher. In March, 2020, per board policy, the board opened up public comment for 30 days and received nearly 2,000 responses with the overwhelming in favor of the recognition.

On Friday, Sept. 15, prior to the first home game of the season, a ceremony unveiling the archway designating the varsity football field as Ambrosio Field was held. Scores of people turned out for the event including former and current Colonie High teachers, administrators, coaches and players, the Ambrosio family and even some of his Cortland State football teammates.

Ambrosio was widely remembered as a family man and a fierce competitor who always found time to work with everyone, coaches and kids alike.

“For Coach A, coaching wasn’t about the ball and it wasn’t about just sports or winning or losing. Coaching was about instilling a set of values in his players so we were better kids and better people,” said Mike Morelli Jr. who played under Ambrosio from 1998 to 2000.

He said the coach used to talk about having quiet confidence, when you didn’t have to scream and yell the loudest or the showiest.

“You are going to get knocked down and the guy might be twice your size but he taught us to get back up because there are guys on the team counting on you,” he said “Those values he taught us — resilience, perseverance confidence — those are not football values those are life lessons and a whole generation of kids coming up through Colonie athletics were shaped by those values. I know I am a better person because of Coach A, and I know we are trying to teach those to the next generation of kids. If we do that, Coach A’s legacy will live on for a long time.”

Former Athletic Director Joe Guardino, came out of retirement to MC the event but had been working on putting it all together since late last year. He said he had to review all the comments to the Board of Education regarding the dedication. He said those from football players, of course, were positive but so were the comments from lacrosse players, drivers education and health class students, cheerleaders and even girls basketball players.

“One comment resonated from a parent. It said ‘Coach A was a kind man and a genuine human being who we want our kids to emulate which I found revealing to the impact he had not only on students but on the parents of the student athletes. They trusted him,” he said. “Kids may not always remember what we try to teach them but they will always remember who you are. They may not remember what Coach A tried to teach them, specifically, but they certainly remember what he was about.”

The current football coach, Greg Bearup, said he coached with Ambrosio for 25 years.

“I was asked to come up here and talk about what it was like to coach alongside Mike Ambrosio and that’s an easy question. It was great,” he said. “He was an outstanding line coach and he knew how to get the most out of the kids and he had sincere concern for his players. However, it wasn’t always about the Xs and Os. He looked at the Colonie football program as an extension of his family. For 25 years pleasure to coach alongside Coach And for the rest of my career it will be my pleasure to coach on Ambrosio Field.”

Ted Zurgatis, Ambrosio’s roommate at Cortland said football was important but family was his main priority.

“That was the most important thing to Mike. He was a loving husband and a devoted father,” he said. “He was a great role model and a great coach, a mentor and above all he was a great friend. One thing I learned from Mike in teaching or whatever you do, you always try to do the right thing and when you try to do the right thing you can never go wrong.”

William Roemer, who is in his first season as athletic director after taking over for Guardino but who has been involved with Colonie sports for years, said Ambrosio led by example.

“Coach Ambrosio was everything that coaches ask their own players to be. He was selfless, hard-working, respectful, and the ultimate team player,” Roemer said. “Dedicating the field in his honor, will not only remind us of his contributions to South Colonie Athletics but now our future generation of athletes will forever feel connected to the games and memories shared on Ambrosio Field.”

Ambrosio’s son Mark and daughter Bethany, were in attendance as was his wife of 40 years, Vicky.

Mark Ambrosio thanked a number of people and all those in attendance before he and his sister and the grandchildren pulled the blue tarp off the bold archway declaring the Colonie High football field Ambrosio field.

“I know he considered himself lucky to call Colonie home and considered himself lucky enough to come to work at a place he called home every day,” Mark Ambrosio said. It is hard to put into words what this gesture means to us but may his love for Colonie football and Colonie athletics live on in the athletes and coaches that step foot on this field for years to come.