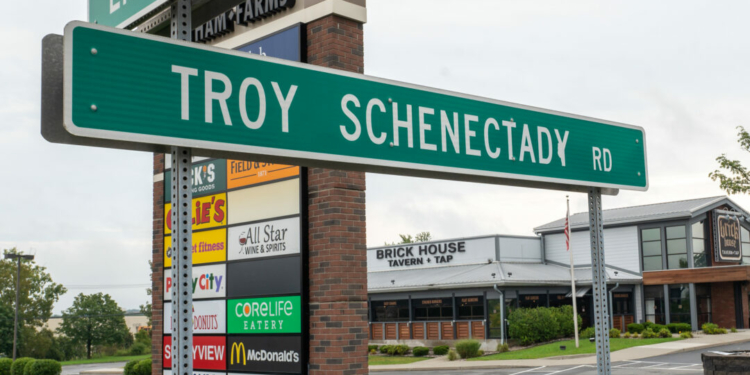 COLONIE — Traffic at the already congested stretch of Troy-Schenectady Road that includes the Northway ramps and the entrance to Latham Farms was the “overriding concern” to Planning Board members regarding a proposal to demolish the former Brick House restaurant and build a Chick-fil-A.

“The way I see it there are site plan issues that are raised and then there is traffic which is the overriding issue. I don’t want to say they are separate, they are integrated but traffic is its own issue,” said Planning Board Chairman Peter Stuto. “We are already having problems at that intersection.”

Chick-fil-A is commissioning a traffic study to determine the impact the wildly popular restaurant would have on the area but Stuto said he would be “more comfortable if we commissioned our own traffic study.”

The board does have the authority to commission its own traffic study and bill the developer on any project in town. At the end of the sketch plan review on Tuesday, Sept. 7, the first stage of the planning process, it was determined the Town Designated Engineer Joe Grasso would oversee the traffic study and the project would return with the results for a second sketch plan review before moving forward.

Grasso acknowledged there is a restaurant there already, and other eateries in the area, but said Chick-fil-A is a different type of use — with a large drive thru clientele — than a traditional sit-down restaurant.

“We are looking at a different use that thrives on generating congestion around the site,” he said. “The Traffic generation from Chick-fil-A is unique and we should look at similar Chick-fil-As and make sure Trip generation estimates are accurate. Traffic is, by far, the biggest issue.”

Tim Freitag, a representative of Bohler Engineering who presented the project to the Planning Board, said the site is larger than most Chick-fil-A sites that have recently opened and the plan is to take advantage of the size to lessen the impact on the surrounding neighborhood. The drive thru line, for example, would wrap around the entire lot rather than just the building.

The drive thru, he said, is not a typical drive thru but will have two lanes. There is not a traditional window but “runners” will have the ability to walk out of the restaurant and deliver meals to those in the second lane.

He said the traffic study is being done in conjunction with, and by the same company, as the one being done to gauge the impact of a proposed Speedway gas station across Troy Schenectady Road from the Latham Farms entrance.

“We don’t want the area and the rest of Latham Farms to suffer from the excitement of the initial opening period,” he said. We’re here tonight to kick off the project, to nail down where this building is going to go.”

He said the company will spend more than $1 million on the project.

As proposed, the 5,000-squre-foot restaurant would have 65 seats inside with outdoor dining and a drive thru. The 2.5-care site, which faces Troy-Schenectady Road between the Northway exits and the Latham Circle, is zoned Highway Office Commercial Residential, which allows a wide variety of development, including a restaurant.

Access would be from a shared drive off Erin Street within Latham Farms.

“If you are in the left hand lane you are basically toast. You are not going to get into the Chick-fil-A parking lot on the first try,” he said. “That is a tough, tough intersection.”

A left onto Erin from the Chick-fil-A lot will also be difficult.

According to the narrative submitted for the project, Chick-fil-A would hire between 120 and 140 people to run the restaurant in three daily shifts of 15 employees. A local operator will be selected to run the day-to-day operations and it would be open from 6:30 a.m. to 10 p.m. Monday through Saturday.

There will be 92 parking spaces, down from 115, and a waiver would be needed to allow a drive thru with stacking lanes and a canopy in the front yard.

The company is expecting the restaurant to cause quite a stir in town. During the Grand Opening, the company will bring in a team of some 20 trainers and five marketing professionals to support the local operator and new employees.

The Brick House opened in the 9,800-square-foot building in 2014 but closed during the height of the COVID-19 pandemic in early 2020. It re-opened in October of that year only to close for good a few months later. Prior to the Brick House chain, the building was home to another chain, Joe’s Crab Shack.

Chick-fil-A, based in Atlanta, was founded by Truett Cathy in 1964. According to the company’s website, Cathy worked in restaurants since 1947 and worked on perfecting the recipe for the restaurant’s signature meal, the chicken sandwich on a hard roll, for three years.

“Cathy’s cooking method is still the way it’s done more than five decades later, and his recipe is still a secret,” according to the website.

Basically, the boneless chicken breast is “hand cut, dipped into a simple egg and milk wash, hand breaded in original seasoning and cooked to perfection in a pressure cooker that locks in the juicy flavor of each piece,” according to the website.

It also offers variations of the chicken sandwich, chicken nuggets and a chicken wrap. For breakfast, it offers chicken on a biscuit as well as different egg based sandwiches.

The store in Colonie, like all of the some 2,000 Chick-fil-A restaurants is closed Sunday as has been the tradition since Cathy opened the first branch in Atlanta.

That tradition stems from Cathy’s deep Southern Baptist roots and a way for his employees to take a day of rest and worship God. Cathy came under intense scrutiny in 2010 when media outlets reported he donated some $5 million to anti-gay, and in particular anti-gay marriage, groups, dating to 2003.

Dave Cathy, the founder’s son, announced in 2012 the corporation’s support of the “traditional family” as some fundamentalists claim is defined in the Bible.

“I think we are inviting God’s judgment on our nation when we shake our fist at Him and say, ‘We know better than you as to what constitutes a marriage,’” he said in a radio interview. “I pray God’s mercy on our generation that has such a prideful, arrogant attitude to think that we have the audacity to define what marriage is about.”

Notre Dame University refused to allow the resultant to open a location on its campus and New York state said it would not allow it to open at rest areas along the Thruway.

The company has worked hard to re-define its image and its charitable arm, the WinShape Organization” now donates to some 63,000 causes across the spectrum.

The state announced earlier this year Chick-fil-A would open locations as 23 rest stops are renovated along the Thruway. A move that has sparked the ire of some lawmakers who are still urging the state Thruway Authority to reconsider.

The company has been in operation at the Albany International Airport but it is behind the security checkpoint so only those with a boarding pass can patronize the restaurant. It recently announced its first stand along location in the Capital District — at 304 Clifton Park Center Road at the former home of Pier 1 Import — which is currently working its way through that town’s planning process.