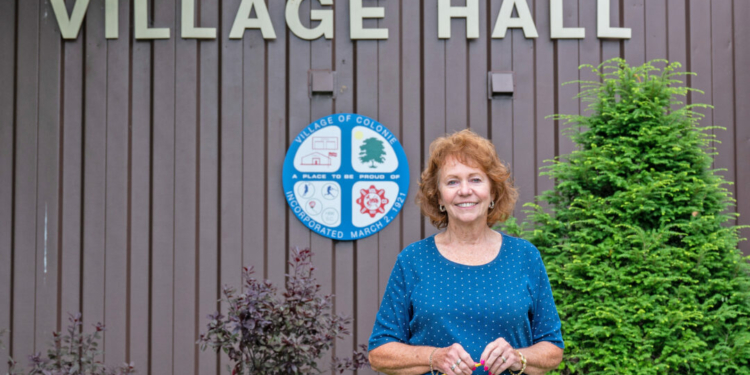 Kathy Haas has been working for the Village of Colonie since 1980. She retired in 2008 but she came back to the village on a part time basis as the treasurer/tax collector nine years ago. She is the past president of the New York State Municipal Finance Officers and was a municipal affiliate with the New York State Conference of Mayors. Her title was once “manager of the mayor’s office” so she played a part in a number of projects in the village over the years. Village Hall employees and family and friends will hold a walking out ceremony for her on July 30. She lived in the village for 31 years with her husband, James.

Q: What are the biggest changes you have seen in town over the past 41 years?

A: Cook Park has undergone a number of changes with the construction of the amphitheater, pavilions and walking trails. Also, the Youth Center has made a difference by giving the youth a place to go play basketball or just hang out.

Q: What part of your job will you miss the most and why?

Q: You retired in 2008 and they brought you back. Do you plan on coming back, and if not, what are your plans for retirement?

A: Of course I will help with any transition and answer any questions or give whatever advice I can. I plan to visit my three grandchildren in South Carolina more often than I do now. And do some cross country excursions in our camper.

Q: Even though the village is in the middle of one of the busiest parts of Albany County, it still has a village feel to it. What do you like most about living in the village?

A: What I like about the Village of Colonie is that the mayor and trustees have always listened to and worked with the residents of the village. They always seem to know the residents and the elected officials and village employees always put the residents’ concerns first. I don’t think there is another village in the state that is like Colonie. The mayor and Board of Trustees are always trying to improve anything they can for the village and its residents.

Q: Who is the one person alive or dead who you would like to have lunch with and what would you talk about?

A: The one person I would like to have lunch with is probably the former village Mayor Frank Leak, who died late last year. We had worked together for 26 years. We went through so many ups and downs together. We would probably talk about past and future projects and all the people who made it possible.