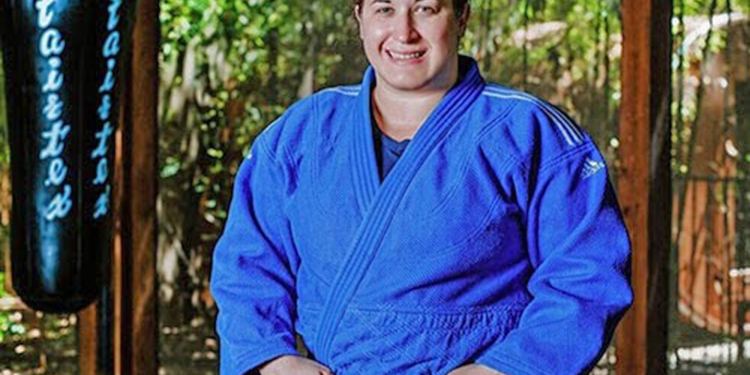 RAVENA — Who says the third time is always the charm? For Nina Cutro-Kelly, the magic number was five.

After being in the running for the U.S. Olympic judo team four times since 2004, this year – her fifth attempt at qualifying – she made it.

When she competes in Tokyo, she’ll be the oldest U.S. Olympic judoka in the sport’s history. She is 36.

Cutro-Kelly, who has competed in more than 50 countries, is a fifth-degree black belt with 10 national titles to her name. She also won a silver medal at the Pan-Am Championships in April and holds a bronze medal from the Pan-Am Games in 2015.

Cutro-Kelly is one of two Union College alumnae going to the Tokyo Olympics. Emma White is competing in track pursuit cycling.

Originally from Albany, Cutro-Kelly moved to Rennes, France, after graduating from Union. There she taught English and earned a master’s degree in teaching English as a second language at Rennes University II. When she returned to the U.S. after eight years abroad, she settled in San Antonio, Texas, where she’s a coach at Universal Judo.

She is also finishing an MBA (specializing in project management) at Keller Graduate School of Management, with a full scholarship from the United States Olympic Committee.

Cutro-Kelly took a few moments to talk about her career and Olympic debut. She is scheduled to fight the morning of July 30 (Japanese time), with the match airing on ESPN3 and online.

How long have you been competing in judo?

I have been competing actively on the international level since 2002, when I made the Junior World Team and actually missed Union orientation because I was competing in Jeju, Korea.

What do you do when you’re not competing?

I enjoy cooking things in the crock pot, running, lifting weights, and have taken up pole fitness to try to stay flexible and strong in my “old” judo age.

What’s it like to qualify the fifth time around? What does this mean to you?

Honestly, it is the culmination of a lifetime of work and it’s really cool. It doesn’t quite seem real to me yet, but I’m sure it will once I fly to Tokyo.

What advice might you give other athletes who also dream of the Olympics?

Set clear short-term goals and journal about them. Try to check in with yourself periodically to adjust and change these goals. I set a daily training goal and a daily personal objective and try to meet them each day.

What’s it been like competing and training during the pandemic? Any particular challenges or unexpected benefits?

The lockdown helped me immensely with time to recover from injury and to focus on new goals. I also was able to work on flexibility on my own. Additionally, I have two roommates who I could do judo with in the garage, where I have a full mat set up. This helped as well.

How excited are you about going to Tokyo?

I am very happy and excited but currently focused on my training, so I’m pretty tired to tell the truth.

Why judo? What about the sport has held your interest and dedication for so long?

I have always liked judo because it is a fighting sport and as a child I got in trouble a lot for fighting in school, so this was a way to use that energy in a more positive way. I stuck with it because it’s like playing chess with your body and I love the strategy of the sport.

Just a shout out to Union for always working with me during my studies when I needed to travel for tournaments and training camps. (She majored in political science and French.)

This feature was originally published by the Union College Communications Department on union.edu.