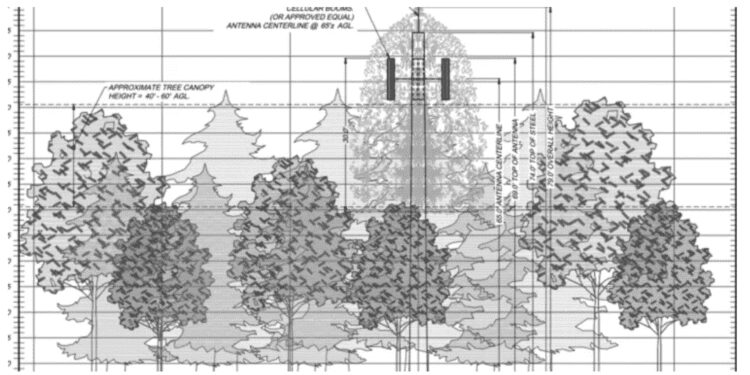 COLONIE — The Planning Board, by a 5-1 vote, gave final approval to a 79-foot Verizon cell tower at 396 Watervliet-Shaker Road.

The plan was modified since it was first introduced in September, 2020, to make it less visible to residents living in the vicinity.

At the base of the tower will be a small shed sitting on a 4-foot by 7-foot concrete slab to accommodate the infrastructure and equipment needed to run the antenna. In June, 2020, the Zoning Board of Appeals gave Celco Partnership, which is doing business as Verizon Wireless, permission to construct the tower in a Single Family Residential Zone near the Elks Lodge off Watervliet Shaker Road. The Elks lodge owns the undeveloped piece of land.

Cellular dead zones in that area of town has long been an issue and Albany County Sheriff Craig Apple wrote a letter in support as did Legislator Paul Burgdorf, who has advocated for better cell service in that area.

More than 70 percent of 911 calls come through cellular, 50 percent of the people have given up landlines and Colonie police use Verizon hotspots to transfer data while in the field. In Colonie, there are antennas on the water tank near Town Hall, a monopole near Latham Circle, on a water tank near Alternate Route 7 and a water tank on Route 2. They all have a range of up to two miles.

To make the cell tower — an unsightly necessity in today’s world — more in line with the surroundings it will be disguised as a pine tree. The Adirondack Council coined the camouflaged cell towers “Frankenpines” when they first started sprouting in the Adirondack mountains.

The fake tree limbs are installed at a density of 2.5 branches per lineal foot and begin at about 40 feet off the ground. The tower from the ground to when the branches start is often painted to blend into the surroundings or is wrapped in a fake bark to make it look more like a tree.

Dave Brennan, an attorney who presented the plan on behalf of Cellco, said there is room for other carriers to install antennas below the Verizon antennas but it is not likely since it will be too low to provide a suitable signal. If there was a desire to make the tower taller, it would have to come back before the Planning Board.

The tower would serve the Watervliet, Route 9, Delatour Road sections of town where there are coverage gaps and capacity issues of the existing towers. Once construction is complete, crews will need to visit the site three or four times a year for routine maintenance.

Planning Board member Susan Milstein voted against the plan and Lou Mion recused himself.