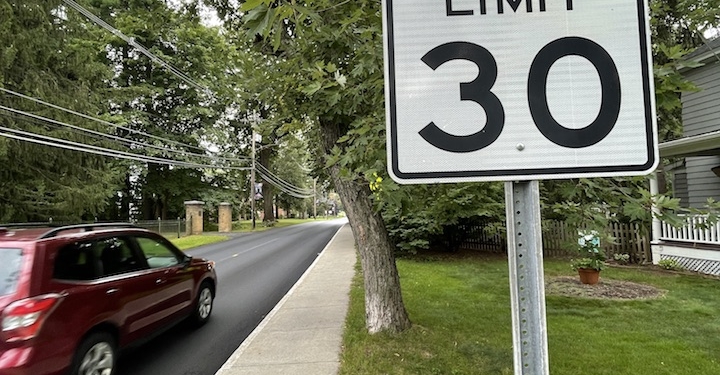 DELMAR — Bethlehem Town Board members said they will be looking into reducing the speed limit to 25 mph and other measures to reduce speeding on residential roads.

Town Board member David DeCancio prompted the discussion late in the board’s meeting on Wednesday, Sept. 14, drawing attention to state legislation recently signed into law by the governor’s office.

“Speeding and traffic issues are among the most common concerns raised by residents from every corner of town,” DeCancio said. “From Selkirk to Glenmont to North Bethlehem, as we see more and more of our residents and our families biking, recreation walking, I think it’s imperative that we now take a strong look at what streets we might want to lower speed limits on.”

Last month, Gov. Kathy Hochul signed two new laws, allowing municipalities to reduce speed limits to 25 miles per hour and to increase fines for leaving car crash scenes without reporting them. According to the governor’s office, research shows that faster driving speeds correlate to more serious injuries and fatalities for pedestrians in the event of a crash.

“Every New Yorker deserves to feel safe when traveling on our streets, whether they are driving, cycling, or walking,” Hochul said. “These new laws will help prevent senseless tragedies and injuries by cracking down on erratic and irresponsible driving. Today, we are reaffirming our commitment to keeping New Yorkers safe and using every resource available to save lives.”

The new legislation is expected to help prevent traffic-related crashes and fatalities by allowing municipalities to reduce speed limits to 25 mph.

Under current law, the default maximum speed limit throughout a city, town, or village may not be set lower than 30 mph. This legislation hopes to improve public safety and prevent pedestrian fatalities by giving municipalities local control to reduce speed limits.

Last November, town residents turned down a proposed road diet for Delaware Avenue, touted to wrangle traffic away from sidewalks by reducing lanes dedicated to motorists while introducing a new lane for bicyclists. It failed with voters, but the discussion to reduce the speed limit from 40 mph has continued. A change, however, would have to come from the state level.

Locally, Brockley Drive residents have complained about speeders; perhaps more so during the school year, which started two weeks ago. Neighbors have asked for police patrols, lowered speed limits and speed bumps on the road that runs perpendicular to Delaware Avenue in front of the high school.

“I think 30 mph is too fast. I think everyone agrees with that,” he said. “But I always want to — a core thing and that is the goal is not just changing the speed limit. The goal is having cars drive more slowly.”

“As we’re thinking about this, we need to think about it in the context of education, enforcement and also physical changes that will slow cars down,” VanLuven said.