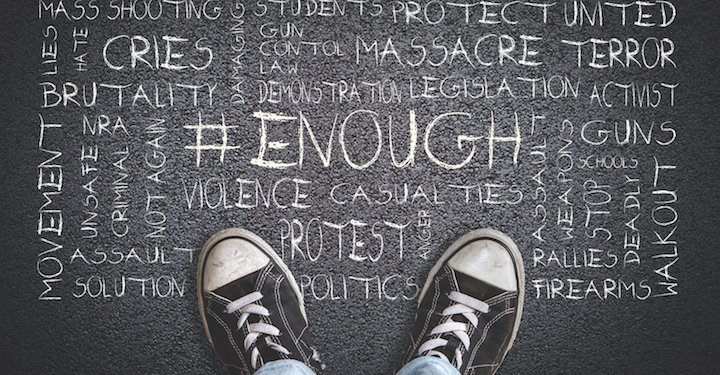 I have been thinking a lot about recent events and gun violence. I keep thinking about how it makes me feel as a mom. Who can think about school, children and guns without going into a very dark place? I know the feeling of sending my children to school and hoping they have a good day. There have been times that I did not want to send them because I did not have faith they would come home in one piece. I have lost my faith in the systems that are supposed to keep children safe. For some reason, the violence feels never ending. Teachers and students are dying in a place that is supposed to be safe.

The first time I heard about a school shooting was the massacre at Columbine High School in 1999. I was sitting in my favorite chair feeding my son who had been born 10 days earlier. I was watching my 2-year-old play with his big red Teletubby on the floor. My sons were only a handful of years away from starting school and at least a decade from high school. I watched and cried as the children on the screen ran from the building in absolute terror. I wept as I thought of the children who were never going home, never sleeping in their beds and never applying for college. Tears fell onto my son as he lay in my arms.

The thought of sending my children to school back then caused me a little anxiety. I was more preoccupied with the little things, like would the kids eat lunch or make friends. I didn’t worry that my children would be killed at school by a shooter with an automatic weapon. Elementary schools were safe! There was no reason to think that little kids would be targets. There was no reason to believe that there would be any more senseless violence in a school. As the mom of two little kids, I never thought there was going to be another school shooting … until there was one, then another and another.

In 2006, just over a year after I married Harlan, a man entered an Amish school after the children were at recess and shot 10 girls ages 6-10. The outrage was felt across the country once again. Mental health issues seemed to be at the root of the shooter’s actions, because what had this community or little girls possibly done to offend this person?

On Dec. 14, 2012, the news about Sandy Hook Elementary School broke just before it was time to pick up Olivia, Benjamin and Rebecca from the pre-kindergarten across the street. In Newtown, Conn., 20 children ages 6-7 were murdered. I kept thinking about what in the world could possess a person to murder children. Once again, mental illness and access to guns were blamed. In no way could I even imagine what the families were going through. The 10-year anniversary is only a few months away. The grief will never end.

The definition of a “mass shooting” varies. The consensus seems to be that there are three or more victims (not including the shooter) in a single incident (not including the killing of a family) and with very little time between victims being hurt or killed. The definition is subject to interpretation. The overall theme is not: Children are being murdered as they sit in classrooms, in the library or the cafeteria.

On May 24, there was another shooting at an elementary school. Uvlade, Texas, is now part of the tragic history of gun violence in our country. Nineteen children were murdered. Two teachers were murdered. There was no way to put a positive spin on the information that assaulted us following the killings. We tuned out the platitudes. We tuned out the politicians and vitriol. We tuned into the pain and the absolute debilitating grief. I tuned out the phrase that seems to fall out of the mouths of everyone every single time that children are killed: “Our thoughts and prayers are with the families.” I don’t want to hear this ever again.

Benjamin, Rebecca and Olivia see the news and the newspapers. They hear about other classes being in lockdown or cancelled due to threats of violence. Even their own school has had issues with violence among students. Raising kids right now is harder than it has ever been. I struggle with the anxiety every single time they leave the house. I struggle with wanting them to have more independence and being overwhelmed by the anxiety that they could be hurt or murdered.

I have had many conversations with the kids about what they are feeling. Over the past few years, I’ve seen some changes in my kids. These days, they are kind of blasé about the violence. In my opinion, it’s a defense mechanism. Rebecca told me that it was just a matter of time before it happens in Albany. Just a matter of time?

But is she wrong?

Jennifer Steuer is an Albany mom whose busy household includes her husband, Harlan, and 14-year-old triplets Olivia, Benjamin and Rebecca. Follow her on Instagram: jennifersteuer.