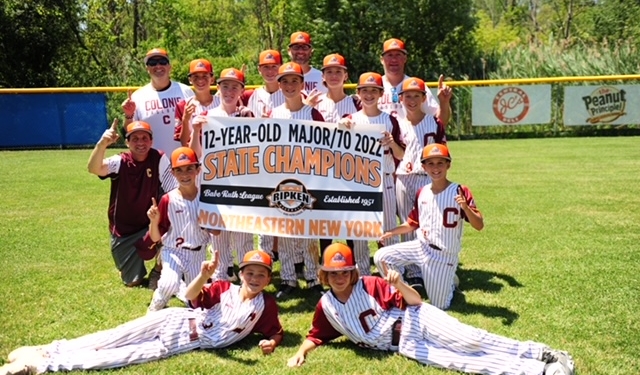 LATHAM — The Colonie 12U All Star team went 4-0 to win the North Eastern New York Cal Ripken tournament and are headed to the next round in New Jersey.

Colonie beat Clifton Park 10-0 and then beat Guilderland 13-3. It then squared off against cross-town rival and this year’s tournament host North Colonie and came away a 17-4 winners on Friday, July 8. It then beat Saratoga/Wilton 7-4 for the championship.

The squad will head to New Jersey on Thursday, July 14, to play in the Cal Ripken Mid-Atlantic tournament. The first game is against the host team, Northern New Jersey at 5:30 p.m. It will then square off against Maryland on Friday, July 15 and round out pool play against Upper Freehold on Saturday, July 16.

The finals are slated for Sunday, July 17, and the championship on Monday, July 18.

South Colonie jumped out to a 6-0 lead after three innings against rival North Colonie and then exploded for 11 runs in the fourth to end the game via the mercy rule.

Jacob Schaul went the distance for Colonie giving up four runs on five hits while striking out six and walking two. He also went 2 for 3 at the plate with a grand slam homerun and four RBIs.

Ryder Mackenzie, Richar Szesnat, Ethan Peck and Brady Juliano each had two hits and drove in two runs in the win.

North Colonie used four pitchers and they gave up a combined 17 runs on 12 hits while walking six and striking out two.

The Blu Sox made a game of it with three runs in the top of the sixth but it wasn’t enough and Colonie won the game 7-4.

Peck got the win, going five solid innings and giving up one run on one hit while walking three and striking out four.

The photos are from the South Colonie vs. North Colonie game. Click on one below to view a slideshow of the rest.

Schools are preparing their supply shopping lists for you