'Sky on Swings' at The Egg explores later stage Alzheimers 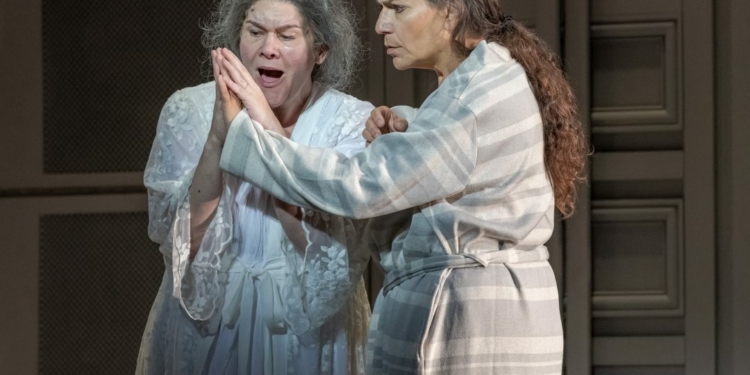 Meredith Arwady and Phyllis Pancella in Sky on Wings, playing at The Egg on Saturday, July 9. Photo by Gary David Gold.

ALBANY — When a loved one is diagnosed with Alzheimer’s and begins to experience the disease in its vast and varied stages, it may seem as though their identity fades with their memories—that the hippocampus and neuropathways get to have the final say.

But, in tandem with the blurred lines that accompany the pain of forgetting, the question of who we can be without definition or expectations is opened.

Opera Saratoga’s production of Lembit Beecher’s 2018 opera, “Sky on Swings,” explores the lives of two women, Martha and Danny, who are both experiencing Alzheimer’s. Martha is in a later stage of the disease, whereas Danny is frustrated and scared of what is to come for her as the disease progresses.

Phyllis Pancella, who plays Danny, explains the relationship that begins to form between these two women—one that, for Danny, shifts from sorrow and fear to connection.

“The sense is that as you let go of some of your memory and your identity, you might actually be more available to connection with somebody new. There’s kind of a softening of their boundaries, of their borders,” said Pancella.

Pancella recounts her time doing volunteer hospice work and a particular client who had a late stage of Alzheimer’s.

“I talked with her husband of 50 plus years, and of course he was very sad at the loss of his wife, and she wasn’t anything like what she had been. But I had never met her. And so I came to her as she was then… I had no expectations. Of course, I couldn’t predict her either, so it allowed for this real, pure present tense and pure togetherness,” said Pancella.

“There is a kind of comfort in thinking that if my identity goes, that doesn’t mean that my life is over,” she continues.

Pancella notes that the soundscape created in the Opera creates a sense of this ephemeral and “shimmery” space that is not quite empty, it is just different and unknown.

Lawrence Edelson, the Artistic and General Director of Opera Saratoga, explains that by entering the world of memory, the show takes on a surreal tone. In addition to the soundscape described by Pancella, the show will utilize spatialized sound—what Edelson described as being akin to surround sound—in order to capture the “sound of memory.”

“The sound of the different singers and their different memories will come at the audience from different directions,” said Edelson.

The production IS at The Egg, which allows for this spatialized sound to have an incredible impact.

Like Pancella, and so many others, Edelson has been able to connect with and relate to the piece on an incredibly personal level. His father is currently living with Alzheimer’s and three of his grandparents also had the disease.

“I think you’d be hard pressed to find anyone right now who doesn’t have a personal relationship to Alzheimer’s,” said Meredith Arwady, who plays Martha. “For me, it was my paternal grandmother.”

“Something that I’ve really found interesting during this process that Larry has said is that this piece is kind of a lesson in improv. The whole thing is improv, and the key phrase in that is ‘Yes, and.’ So if someone has something they say wrong, something they’re sharing, something they’re repeating for the umpteenth time, you don’t say ‘No,’ you say ‘Oh, that’s what you’re feeling. And what else?’” said Arwady.

Edelson admitted that prior to watching the world premiere at Opera Philadelphia, he had some reservations about how the piece would deal with such a sensitive subject without sensationalizing it. But upon watching the opera, he knew he wanted to bring it to Opera Saratoga. He contacted Beecher soon after and Opera Saratoga began working on the design for the show in 2019, with the anticipation of a 2020 production. However, due to COVID, production was put on pause until the Fall of 2021.

“We typically go to the theatre to be entertained, and while you’re not going to leave this piece laughing—that’s not what this piece is—you will definitely leave this piece changed, in every positive way,” said Edelson.