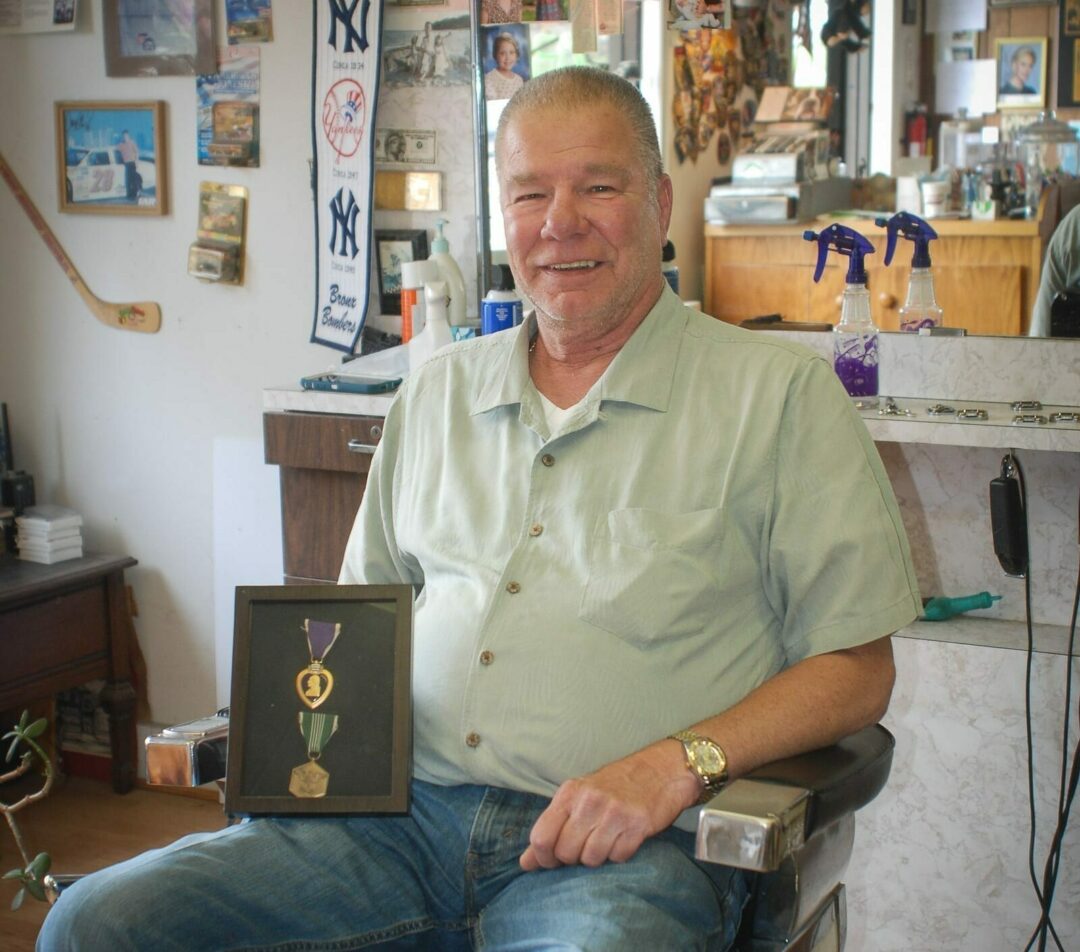 Delmar Barber Joe Bruno sits in his barber's chair on Delaware ave with his Purple Heart.

DELMAR – Most kids growing up in Albany have a dream of being announced at Yankee Stadium and appearing on the scoreboard in center field.

It took Joe Bruno 73 years, but his wish came true Tuesday, May 4, during the Yankees win over the Houston Astros.

“I have always been a Yankee fan,” Bruno said softly from his barber’s chair in his shop on Delaware Avenue in Delmar. “I used to like the (Brooklyn) Dodgers early on, but they left,” he said with a smile.

Bruno’s path to the scoreboard was not the way most people make it. His path travelled through South Vietnam in 1969 and included a Purple Heart for taking shrapnel from a mortar round in the neck on his journey.

The Yankees have a special moment during each home game where the team honors a military veteran for their service during the seventh-inning stretch.  His VFW Post 3185 nominated him to be honored and his moment came true last week. He is a past commander of the post, but most people in town know him as “Joe the Barber.”

When you walk into his shop and look on the walls, there is no doubt where his allegiance lies.

“I am thrilled to have this honor and I didn’t expect it,” Bruno said. “I watch every game on TV — and I mean every game.”

Bruno grew up in Albany and was drafted into the Army in 1968. He was deployed to Vietnam in January of 1968 and arrived just after the Tet Offensive.

“It was a mess when I got there,” he said. “We came in to relieve the Marines after (Tet) and they really took a beating.”

He was stationed at a Duc Pho base camp 50 miles south of Da Nang.  He was injured in August 1969 and spent five weeks in the hospital before returning to duty.  He earned his sergeant stripe while in Vietnam.

Upon returning home he worked as a barber in various shops in the area, but hung his own barber pole at 337 Delaware Ave., on July 1, 2000.

“I cut so many [veterans’] hair every week,” Bruno said. “This was an honor for all of us. It is great that the Yankees do this every game.”

Bruno celebrated the night with many of his friends and relatives at the Blanchard-Curry American Legion Post in Delmar.