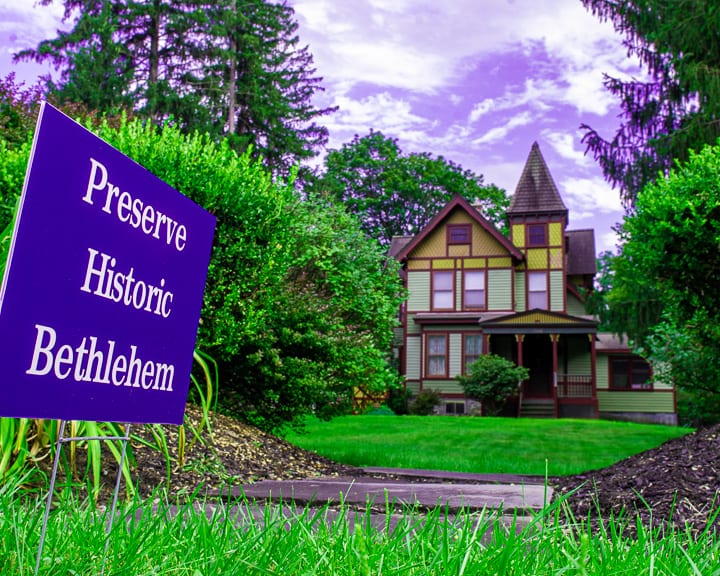 SLINGERLANDS — When the medieval Notre-Dame cathedral in Paris, France caught on fire this April, it suffered severe damage and attracted international media coverage.

On a smaller scale, lightning struck Albany County Legislator William Reinhardt’s (D-33) Slingerlands house at 1613 New Scotland Ave. in May 2017 which caught on fire and took two years for his family to finally move back in after careful restoration from the fire and water damage. More recently, lightning struck another Slingerlands house on 632 Kenwood Ave. on Monday, July 29; it also caught on fire, received fire and water damage, and a hole in the roof, and the owner is temporarily living with relatives as the house is deemed unsafe to live in for now.

These examples conjured up thoughts on how structures, historic or not, can be vulnerable to factors beyond human control. Regarding historic structures specifically though, it can further lead to a discussion of the topics of historic preservation and historic districts — which is present in Bethlehem.

Slingerlands resident Kathleen Bragle similarly had that mindset, believing that the Town of Bethlehem should be more proactive in preserving its Slingerlands Historic District, its historic properties within and elsewhere around town. “The history here is so important and it means something to people. I believe Slingerlands is special but there is a density issue and there have been proposals for developments in the area which is just atrocious,” she said.

Bragle lives in the oldest house in Slingerlands Historic District, which was originally built by John A. Slingerland in 1790. The Slingerland family has a rich history in the 18th and 19th centuries, with various connections to the local town community and national politics, for instance. Bragle said she knew of the house’s history when her family first moved in in the late 1970s.

Before proceeding, let’s discuss about the Slingerlands Historic District first. It consists of 102 buildings and one structure, which were erected mainly between 1790 and 1940, which includes Victorian, Colonial Revival and Bungalow architecture. Local residents worked with Town Historian Susan Leath and the New York State Parks, Recreation and Historic Preservation (NYSPRHP) office to have the area recognized by the State and National Historic Registers of Historic Places in December 2011 and February 2012 respectively, according to Leath.

Despite this designation, this historic district lacks any official town laws or regulations for its property owners and according to Bethlehem Planning Board Chairman John Smolinsky, parts of the district are zoned either Residential or Hamlet. “It’s a formality of being recognized as a historic district but when [the Planning Board] receive project applications in that area, we are required in the zoning code to recognize and consider the historic value of the

According to NYSPRHP’s underlying state Historic Preservation Office (SHPO), owners of properties on the State and National Registers of Historic Places “are free to remodel, alter, paint, manage, subdivide, sell or even demolish a National or State Register listed property” as long as it complies with local zoning, not use federal or state funds to complete such a project, and not require a state or federal permit to do it. If the latter two points are the case though, property owners need to review their proposed alterations with SHPO staff.

In the case of Reinhardt’s aforementioned Slingerlands house — built in 1898 and originally owned by the Slingerland family — Reinhardt said it was important that the house repairs “tried to retain the original look and Victorian style as much as possible” although he acknowledged his restored residence now is not a direct copy of how it looked like before it was struck by lightning in 2017. He acknowledged that the attic, fireplace mantle and many electrical appliances were among those damaged but he was “very happy” with the repair results despite the two-year wait.

Moving back in on June 12 this year, he said an example of a lost item from the fire was an envelope containing key information about the three families, including the Slingerlands, who previously owned the house and when.

“Not all the family treasures survived unfortunately but this house has character to it and preserving that was so important,” he said. “We always kept the Victorian style in mind in terms of the house’s painted color schemes, wallpapers and so on. I had to get a building permit from the town to restore my house which was a smooth process.” He added that he appreciated not facing any issues about what kind of building materials and tools the repairs could use.

There is a movement, though, among numerous Bethlehem residents, especially some in Slingerlands, to push the town government to set up official laws and regulations on properties in the Slingerlands Historic District for the sake of further historic preservation.

historic-slingerlands, which has received 853 signatures as of Friday, August 9 that wants town codes and tighter zoning laws to regulate what type of proposed development projects should be allowed in the Slingerlands Historic District; it also wants the district to be recognized in town code. Its aim is, however, different from wanting laws and regulations that strictly limit what owners can do with their properties there, like restricting what color schemes should only be allowed or the size of windows.

Slingerlands resident Ilona Muhlich, who helped set up the Slingerlands Historic District in 2012 and is living in an early 19th-century New Scotland Road house since 1973, said she personally would not like the type of laws or regulations that restrict what Slingerlands Historic District property owners can do with their houses. “Instead, I just want some protection from commercial development in the area which is our biggest fear now. We don’t want things that don’t align with the area’s historic character or structures,” she said.

She and Smolinsky said that numerous residents have brought up in the past year’s comprehensive plan public forums about their desire for the town to take more proactive steps to preserve the historical district and structures.

Smolinsky wrote in a follow-up email that people ideally would support the idea of more historic preservation in town but he “think[s] support might dwindle and opposition [might] increase as any proposed laws/regulations become more prescriptive.” Leath said, “I think a local law would be very good if it balances the rights of the property owners with the desires of the historic district and preservation. It has to be thoroughly reviewed and discussed with interested parties onboard.”

There is interest in the town having additional historic districts besides Slingerlands although it is unclear whether such new historic districts either would follow Slingerlands’ footsteps, work to be recognized by the State and National Registers of Historic Places and not have any restrictive laws on affected property owners, or be established by the town itself which may develop restrictive laws on affected property owners.

Should a potential new historic district follow the former’s path, SHPO has described the process for applying a property or area/district to the registers. Eligible properties — including residences, bridges, churches, cemeteries, groups of significant buildings, etc. — should be over 50 years old for consideration and an application has to be submitted to SHPO for evaluation.

According to SHPO, “If the property is determined eligible for listing, the nomination sponsor is responsible for providing documentation that describes the property’s setting and physical characteristics, documents its history, conveys its significance in terms of its historic context, and demonstrates how it meets the register criteria. The New York State Board for Historic Preservation reviews completed nominations. If the board recommends the nomination, the New York State Historic Preservation Officer (Commissioner of the Office of Parks, Recreation and Historic Preservation) lists the property on the State Register and forwards it to the National Park Service for review and listing on the National Register.”

The above process usually takes six months to a year long for a historic property but it may take over a year for an applying historic district. SHPO also noted that a property owner can object to being on the registers.

Smolinsky and Reinhardt believed that the overall application process should start with a grassroots efforts on the residents’ part.

Smolinsky said it should also start with an inventory which would catalogue what and where certain houses and properties are located in town that have historical value; for a new historic district, an inventory needs to present a group of closely-located historical properties.

“There may need to be some outreach to landowners about this possibility but not everyone is always interested,” he said. “When the Slingerlands Historic District was formed, some landowners questioned about possible regulations and they did not want to be a part of it.”

Muhlich recalled back in the early 2010s when the Slingerlands Historic District was applying for the registers, “some people were afraid they will not be able to put on additions to their houses or paint them how they want but we reassured them that nothing like that would happen.”

Reinhardt similarly said, “As a property owner, I’m a bit wary about restrictions being too severe in terms of what I can do with my property. For example, a property owner should not be prevented by a historic designation to introduce energy-efficient things to the house if they want to embrace new or energy-saving technology. But that’s not the case in Slingerlands.”

When asked where in Bethlehem could a new historic district be located, Reinhardt, Smolinsky, Muhlich and Leath suggested somewhere in South Bethlehem, like the area along South and Bridge streets.

Leath said that region “is a great community of historic homes which may have been first built between the 1860s and the 1900s. It’s beautiful there.”

There was also a general consensus among them that having more historic districts in town is a nice idea overall but they agree there is a process to that.

“I don’t think the town can take any lead on establishing a historic district since it does not own properties but it can back property owners up who feel that want to be on the State and National Registers,” Smolinsky said. “Property owners need to take that initial interest first and once an application is gathered and made, the town can be in favor of it.”

The aforementioned examples of the Notre-Dame de Paris and two Slingerlands homes fires present the reality that historic structures in Bethlehem are always vulnerable to external circumstances.

This concern adds to the possibility of development projects being erected within a historic district or near historic properties.

“You never know what could happen but I think what’s important is that we have to take care of things here. Preservation is not a passive verb, it’s a very active one,” Bragle said. “We need to appreciate historic structures mentally and emotionally but also care for their physical state and preserve them for future generations.”

“There’s no predictability with things like fire and lightning but there’s also threats like development. As I’ve said before, the Planning Board is required to take a look at historic values and try to steer a new project to something more compatible with the proposed neighborhood,” Smolinsky said.

Reinhardt recalled feeling distraught at how damaged his house was in 2017 but “the Slingerlands Fire Marshall came up to me while I was standing in the front yard and said my house luckily survived because it had thicker beams and better construction materials from when it was originally built. If it were a more modern home, it would’ve burned to the ground. Each historical building has a story.”

He concluded that his family intends to live in the house “as long as we can and I’m really glad to be back.”