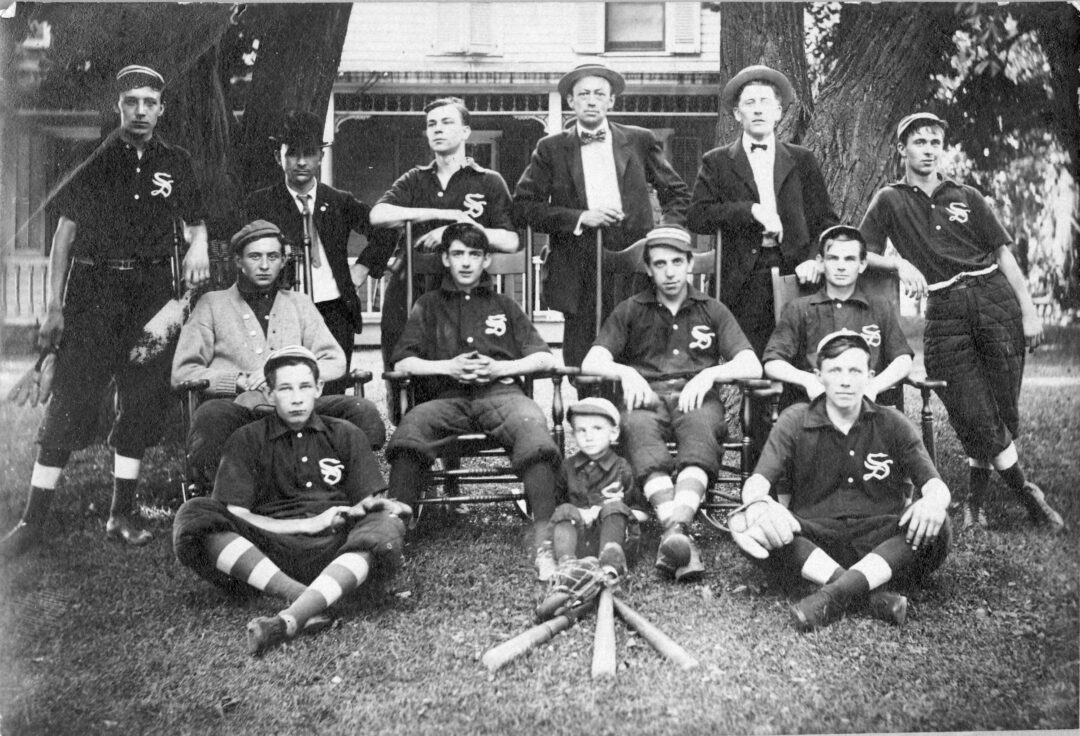 Ira Pier, pictured in the middle row on the far right, was called the “Pride of Slingerlands” when he was honored by the town for his prowess on the baseball field. Town of Bethlehem / Town Historian

SLINGERLANDS — Ira Pier, a lifelong resident of the town, World War I veteran and local baseball hero, died Thursday, Sept. 20, 1973, at the age of 88.

When Pier died, his family carried on quietly. His obituary barely comprised of a column inch. Eight lines, of which stated his name, his address, and the names of his six surviving siblings. It stated that funeral services would be private and that there would be no calling hours. It closed with a single request:

“Please do not send flowers.”

A Christian service was officiated by a Delmar pastor at Applebee Funeral Home in the center of town. After a quiet service, he was interned at the cemetery a mile away, in the opposite direction of his home. And, just as swiftly and quietly as the end of summer approached, so was the passing of the man once called “The Pride of Slingerlands.”

“I have only a vague recollection of doing the funeral,” recalled Pastor David Mc Dowell, forty years later. “It was one of my first as a young pastor and I was called because [he] had no church affiliation.

“I was surprised by how few people were there.”

Pier’s obituary left little hint of the man. Even the extra “i” in “calling hours” seemed to suggest him to be unimposing and not worthy of a cursory glance. The death notice failed to mention how he was a lifelong resident of Slingerlands. That his home, the one his father built in 1900, was where he lived for all but a few of his days. That some of those years away from home were spent in France fighting against the Germans in World War I. And, once he came back home, he continued to work at The Slingerland Printing Company, just a short walk down the railroad tracks where he had worked for decades before it was sold and later converted to apartment housing.

And, it certainly said nothing about baseball.

Slingerlands realtor Everett Hevenor wrote a weekly column in the back of the Altamont Enterprise just prior to World War I. Surrounding his ads for available property in and around the hamlet, he shared the news of what was happening within it. Anything from a couple hosting a bridge party in their home to the alleged theft of a horse. Hevenor was the town crier.

Hevenor was also a supporter of the local baseball club. He would write about their victories from the field, turning local boys into newsprint heroes. Pier was one of those heroes. After having spent the past several years as both captain and manager of Slingerlands’ ball club, Pier decided to venture off into playing semi-professional baseball in Albany.

In 1908, Pier was gifted a gold watch by the people of Slingerlands prior to the start of the baseball season, which always fell on Decoration Day. In his column that week, Hevenor dubbed Pier the “Pride of Slingerlands.”

Semi-professional baseball was still popular in cities across the country. The professional National League had eight teams. The upstart American League owned eight teams as well. No league went further west than Chicago. The game was still a novelty and professional ball clubs couldn’t always pay top dollar. According to baseball historian Bill Kirwin, Albany native Cy Seymour earned $1,000 a month to play semi-professionally in Plattsburgh before ultimately starring as a hard-throwing pitcher for the New York Giants, and later as a spectacular hitter for the Cincinnati Reds. In 1907, a decade after Seymour premiered for the Giants, Ty Cobb earned $2,400 — over seven months — with the Detroit Tigers.

Though the local ballfields often paved the path to professional careers for such players as Seymour, Johnny Evers, George Davis and others, Pier did not advance. However, he maintained a good reputation on the mound in Albany.

When war broke out in Europe in 1914, many of Slingerlands’ young men went off to fight. Ira was one of five Pier brothers to go overseas. He served as a private in the 83rd Infantry Division. The 83rd was stationed outside Le Mans, in France in June 1918. It was a depot division, supplying more than 195,000 officers and enlisted men as replacements to the front lines before the war’s end in November 1918. Ira safely returned home by the following February.

Ira returned from the war to his job at the Slingerlands Printing Company, where he spent most of his life working. After the press was established by Cornelius Slingerland in 1879, it became one of the largest employers of the hamlet. It grew into a successful business thanks in part to its location; wedged between the D&H Railroad and present-day New Scotland Avenue.

Ira had remained in Slingerlands throughout his life. He died on Sept. 20, 1973. He was the brother of May, Iona, Viola, Charles W., J. Edwin and Perry W. Pier. A private funeral service was conducted at Applebee Funeral Home in Delmar. There were no calling hours.

In the winter of 1969, Allison Bennett paid him a visit. The author and town historian was intrigued about his time as a baseball player. The conversation yielded more details about his “Village Wonders” teammates who defeated the best of the teams from Cobleskill to Rensselear.

“We handled our own pretty well,” he said.