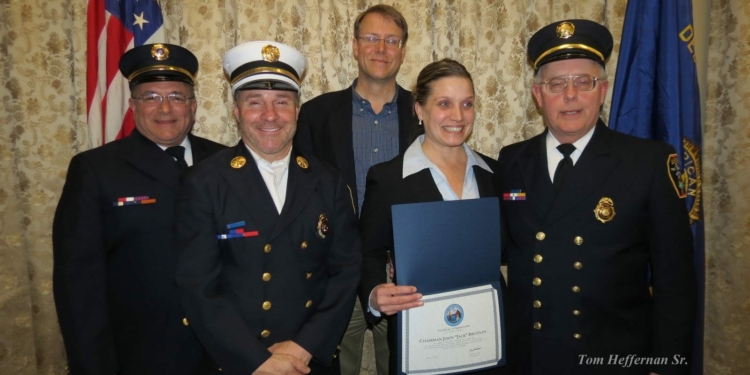 Each year, members and officers of Post 1040 honor a Person of the Year from each of the volunteer fire companies, the volunteer ambulance service and the Bethlehem Police Department. Each organization is asked to select a member it feels is deserving of the honor, and each of the awards is presented by another member of the recipient’s organization during the annual ceremony.

“We are appreciative and grateful for the generous gifts of time, talent and energy these volunteers have given to departments in the town of Bethlehem,“ said McCoy. “They have bravely and selflessly volunteered with the Fire and Police Departments as well as Emergency Medical Services serving their friends and neighbors and truly helping their fellow citizens in Albany County. I was honored to be a part of a recognition ceremony this week to say thank you.”

According to BPD Commander Adam Hornick, who presented Spinnato’s award, Spinnato was on maternity duty in 2017, during which time she “was a tremendous asset to the agency in regards to the completion of special projects.” Hornick said Spinnato worked on numerous assignments regarding the agency’s general orders and accreditation standards, the largest of which was the completion of Operation Safeguard, an initiative from the New York state

“During this assignment, Officer Spinnato personally visited over 600 businesses in the Town of Bethlehem and helped educate them on this process,” said Hornick. “She went above and beyond and worked to forge long term bonds with our business partners on this important topic.”

Selkirk Fire Commissioner Doug VanApeldoorn presented former Fire Chief Bill Asprion with his Firefighter of the Year award, listing off some of his accomplishments during seven years in that office, which culminated last year. “Seven years as Chief is one hell of an accomplishment and deserves to recognized rightfully so,” he said. He spoke of Asprion’s work to build mutually beneficial relationships with local businesses, his work responding to Hurricane Sandy and the 2015 fire at the Bethlehem Industrial Park.

American Legion Post Commander Lyle Maddock said that honoring those who put themselves  in harm’s way to keep the rest of us safe is not only important, but also something he looks forward to each year. He said the post intends to step it up next year for the 40th anniversary and is hoping to reserve a larger space, such as at the town park, to allow for more guests, more fanfare and more fun.

“We thank you Commander Maddock,” said VanApeldoorn, “and the members of the 1040 Post, for giving us this stage, and opportunity to recognize one of our own for their contributions to not only our fire department, but also to our community.”