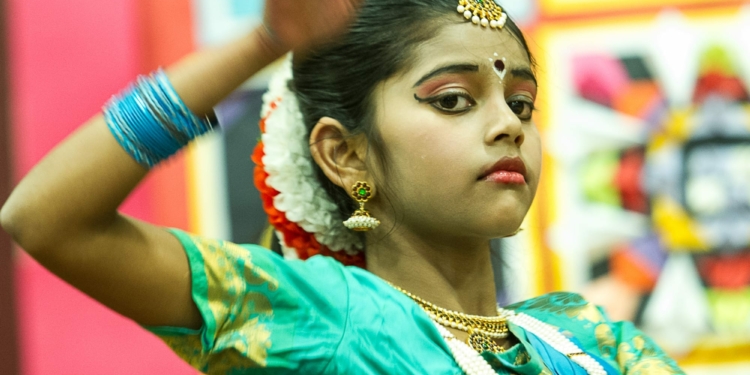 COLONIE —  Sixth grader Zorawar Mohal wears a turban, just like men who practice Sikhism have done since the 15th century.

His classmates at Sand Creek Middle School, though, don’t know the history and significance of the turban, or and the fact men of the Sikh religion do not cut their hair. As such he was often bullied or made fun of.

That is why Mohal put so much time and effort into an informational booth about Sikhism at the South Colonie Multicultural Festival on Friday, March 8, at Sand Creek Middle School.

“Basically, I want to show people about my religion and try and teach them how it works and why we wear a turban,” he said while sitting in front of a plethora of informational snippets and photos about the Sikhism and it’s rich history.

His mother, Barvander Mohal, said her son is one of only six Sikh children in the middle school and feels the event is a perfect opportunity to learn about all different cultures and religions not just Sikhism.

“Everyone who came by the booth is so friendly and the people who did come now know the meaning of Sikh and why it is so important to wear the turban,” she said, while men of the religion wrapped the heads of those willing in the religion’s headdress.

To view a photo gallery of the festival click here.

The now-annual Multicultural Festival started with a small potluck party held by April Mlambi, an English as a New Language instructor at South Colonie, and it has since grown to filling the Sand Creek gym with more than 20 different cultures showcasing their unique food, dance, dress and history.

“Today’s political climate aside, I think clearly, when you see the support we have from our families and community members, people want the opportunity to share their culture and feel proud of where they come from wherever that may be,” she said at the event while draped in a South African flag and shouting over bagpipes blaring in the background.

Her husband is a Zulo from South Africa, she said, so she considers herself an honorary South African.

About five years ago 17-year-old Katherine Weng came to the Capital District from China and used to attend the pot luck dinners with her family.

“We all come from different countries and we really don’t know each other,” said the Colonie high senior who spent a good part of the day manning the China booth. “For me I like to learn about all the different cultures because if I know their culture I will feel closer to the people of that culture.”

Riley Rourke, a fifth grader, was manning the booth about Australia, the native land of his father, Ian.

“It’s pretty fun to look at all the things people have and what people do and what their culture is like,” he said from the shadow of a stuffed kangaroo.

Rafi Topalian, known as Rafi the Singing Jeweler, is an organizer for the Festival of Nations and was on hand at Sand Creek to sing four national anthems in the respective country’s native tongue as well as “God Bless America.”

“We are here to celebrate our differences but we also celebrate our similarities,” he said. “We are all Americans, and prejudice comes from pre-judging, and education is what we need to defeat anger and hatred. When you learn we are more the same than we are different we will all be in better shape.”

Shaunna Pastusza, a seventh and eighth social studies teacher decked out in the traditional attire of her native Poland, echoed the same sentiments.

“We want to build bridges between the various communities. Here at Sand Creek we have a very diverse group of kids and we realize how important it is to celebrate each other, and get to know each other, and promote peace and harmony,” she said. “That’s what it really boils down to.”