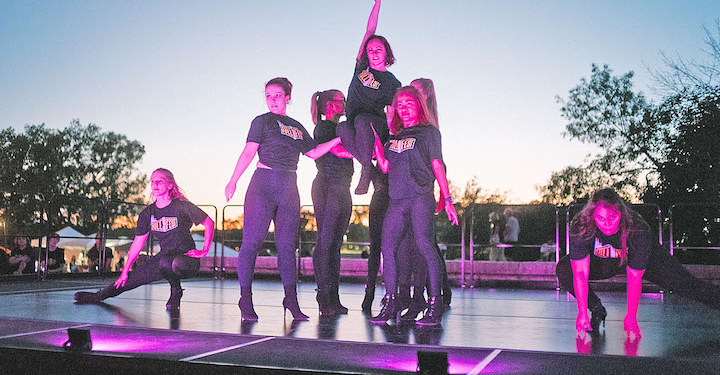 TROY — It’s always exciting to see a locally organized event make a strong return. It’s entirely more satisfying to see something like Troy Dance Factory’s Full Out Fest take its place as a summer event staple. The August 14th, sold-out, outdoor festival at Troy’s Riverfront Park showcasing the dancers of TDF brought in hundreds of community members and fans who were excited to relive the energy of last year—or, for the newbies, hop on a chance to experience the dense hotspot of art and community.

They bested the parking challenges presented by street shutdowns for the filming of HBO’s “The Gilded Age” and a strong, hot sun that followed a few deceptively breezy summer days. They filled the concrete amphitheater armed with decorated posters, refreshments and umbrellas—maybe stopping at the maker’s market to purchase a cool new hat for some shade. They buzzed with excitement and screamed for the performers on stage, running to meet them with hugs and flowers.

All in all, this year included 21 unique dances, seven musical acts, a market of thirty makers and community organizations, a food court of a half dozen Troy establishments and a breezy riverfront lounge area, illuminated by neon lights with Whiskey Pickle serving up refreshing sangrias for parched guests.

Full Out Fest organizer and TDF owner Nadine Medina managed to make a safe and comfortable space for community members to take in some dance and music in the sun, stroll along to learn about the hard-working orgs such as Soul Fire Farm, Free Food Fridge, Troy YWCA or More Music, Less Violence and peruse vintage finds, handcrafted textiles, jewelry, pottery and art. So much coming out of a little space, it will almost overwhelm you.

In a beautiful way, Full Out Fest uses the close-knit nature of downtown Troy industries to introduce more people to dance and the incredible power and effort that goes into mere minutes of a performance. An excited passer-by looking to spend the day outside at the park had an opportunity to nab some flavorful bibimbap from Cafe Euphoria, one of Primo Botanica’s iced chocolate drinks and walk along the grassy ridge of the park amphitheater to watch the seamless stream of performances (an organizational feat of choreography in itself). Maybe they even circled right back to the market’s edge to pick up their favorite artist’s merch and snap a photo.

Meanwhile, ticket holders who nabbed seats early got set up at cushy tables front and center, with brightly lit centerpieces set with bottles provided by 22 Second St. Wine Co. Its a prime spot for family and friends to get the best angle for the evening’s choreography—courtesy of Nadine Medina, Dorrie Boyce, Sydney Kurzejeski as well as a few classes (choreo composition) who created their own works, with help from TDF facilitators.

Between dances, musical performers took over the park’s side stage and DJ Intell Hayesfield kept the energy high all day and night as emcee—complete with hilarious and on-point commentary about the dances, reading the thrill right out of the audience member’s minds. Sydney Worthley played an unreleased track “Anaheim” during her set of bright, poppy rock songs, solo artist Lewna performed a warm, sexy set with a full band featuring her single “Falling” and rapper OHZHE’s set was clean and crisp, showcasing the performer’s unique prowess behind the mic.

Later, singer emhasleftthebuilding made her stunning Capital District debut with support from The Age, Spotify hitmakers Freedom Stratton and B. Chaps kept the crowd jumping and Pink Nois shared a rework of his hit “Toblerone” amongst a set that showcased his vocal and production power. To close out the show, Girl Blue played an intimate solo set, complete with an encore that had some audience members in tears.

It was a musically diverse roundup that complimented the range of hip hop, tap, jazz, insane heel performances, lyrical choreography, floorwork and “open style” performances Troy Dance Factory put on throughout the day.

After watching back-to-back performances of contemporary floorwork and chairlesque (an absolute mastery of balance that made everyone sweat) leading into the incredible advanced beginner heels performance, one former dancer in the crowd got teary-eyed. “It’s just so much and it looks so good,” they gushed.

I’ll say this here, when I should have said it in sentence number one: Where does one get the opportunity to discover dance in the space and manner that Full Out Fest has provided? I’ve thought about it a lot and can’t seem to find an answer. This was a SOLD OUT festival centered around the dancers of one company. That’s a huge support system. It’s important to note that we have TDF owner and Full Out Fest director Nadine Medina to thank for this abundant congregation of business, community and art. She puts her blood, sweat and tears into this event and you can feel it here.

Full Out Fest invites the community to stumble upon it with curious eyes and ears. The perimeter of the park was filled with people, mumbling about how it was dance that pulled all these people into the park and watching their kids mimic moves on stage or just get sucked into the fun of it all. And sure, dance isn’t a common thing around here to be pulling the masses in—its not the NYC ballet in Saratoga and or a traditional display at The Egg in Albany. But this event makes dance cool and accessible, multidimensional and absolutely exciting. You can show up as you are, get loud, up and out of your chair, get involved. It’s not just Troy Dance Factory’s festival, it belongs to everyone. Cheers to year three.

Letter to the Editor: Disposing the flag with honor

SPOTTED: The Scottish Games at the Altamont Fairgrounds