Letter to the Editor: Disposing the flag with honor 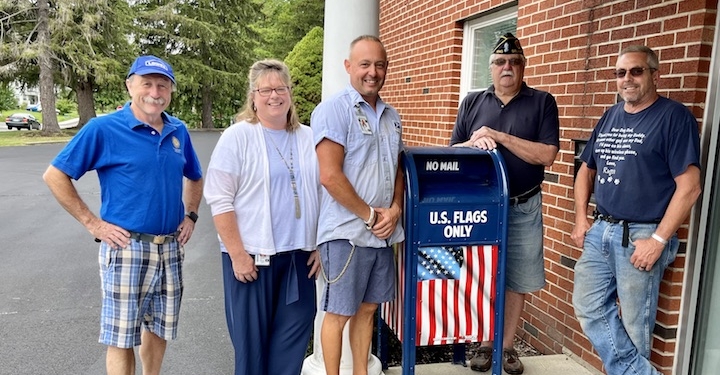 Letter to the Editor, Bethlehem Spotlight:

The American Legion Blanchard-Currey Post 1040, Delmar, in conjunction with the Delmar Post Office, has appropriated a collection can for the disposal of unserviceable American flags. The container is located in front of the Post at 16 West Poplar Drive in Delmar. Flags that are worn, torn or otherwise no longer useful can be deposited there at any time.

Special thanks to Postmaster Kristen Healy and Letter Carrier Pete Huba of the United States Post Office of Delmar, the National Association of Letter Carriers Branch 29 and All Signs & Graphics of Albany for their collaboration and contribution to this project.

For God and Country,

The United States flag was first imagined after the signing of the Declaration of Independence in 1776. The Continental Congress authorized creation of the first national flag on June 14, 1777. It was decided that the flag should have 13 stripes, alternating red and white, to represent the original 13 colonies, and that the new union be represented by 13 white stars in a blue field to signify a “new constellation.” Francis Hopkinson, one of the signers of the Declaration of Independence, is most often credited with the original design.

Today there are 50 stars on the flag to represent the 50 states, while the 13 stripes still represent the 13 British colonies that became the first states. While this may be common knowledge, Public Law 94-344, known as the Federal Flag Code, may not be as widely known. The code dictates that the flag is to be treated with respect and proper etiquette. The code is extensive, but the following guidelines can help private individuals interested in displaying their flags do so in accordance with the law.

• Flags should only be displayed in public from sunrise to sunset, unless the flag can be properly illuminated during darkness. In this instance, it may be displayed at all times.

• State and local flags are traditionally flown lower than the American flag.

• A flag in poor condition should be destroyed with dignity, preferably by burning. Most American Legion posts and local Boy Scouts troops will have the resources to retire flags accordingly. Many will host annual flag retirement ceremonies on Flag Day.

Tags: americabethlehemLetters to the editorveteransVeterans For Peace
ShareTweetShareShare
Previous Post