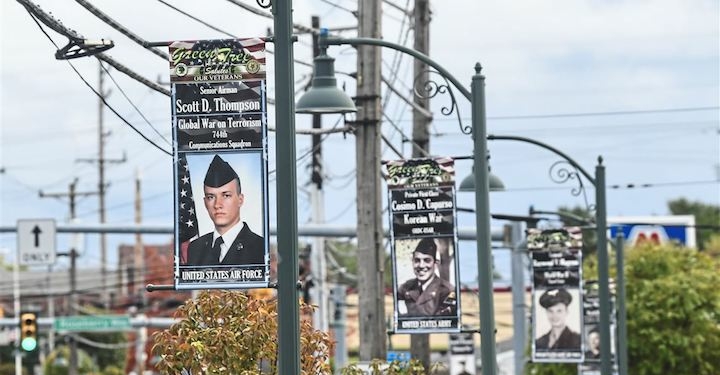 DELMAR — In a few months, the streets of Delmar are going to see some new faces.

The Delmar Veterans of Foreign Wars Post 3185 is putting on a Bethlehem Military Tribute Banner program to honor veterans and active-duty service members.

From Memorial Day to Veterans Day, 24 by 48 inch banners will hang from utility poles on Delaware and Kenwood avenues honoring local heroes. The program is being put on by the VFW and coordinated by Art Thornton.

“Bethlehem has  always been supportive of veterans and we have a big veteran population here,” he said. “We thought it was a good idea for the town.”

Joe Bruno, commander of the VFW and barber on Delaware Avenue, had tried to start the program a year ago, but it never took off. Other towns, like Athens, have been successful with banner programs. Thornton made contact with the Athens program in hopes that Bethlehem’s will reach the same success.

After traveling through other towns and seeing local vets on display, Bruno couldn’t understand why Bethlehem didn’t have a similar program. So, six months ago, he tried again and succeeded.

One of the major goals of the program is to honor all veterans and active service members. The honor ranges from veterans, to reserve members and National Guard members. All who are often the quiet residents of Bethlehem.

To be a member of VFW, a veteran of the armed services must have fought in a foreign conflict. The post membership requirement could limit some veterans, so they opened the banner program to all veterans.

“Any veteran that served in any honorable capacity can be honored,” Thornton said.

The banners will hang on National Grid utility poles from Memorial Day to Veterans Day in 2022 and 2023. Thornton estimates that the deadline for sponsorship of a banner will be the last week of April in order to allow for banner creation and the VFW hanging the banners on the poles the weekend before May 30.

If a family or sponsor misses the deadline for the season, there will be a chance for them to pay for a banner for the next season. According to Thornton, after the two years, the families who bought a banner will be given the retired banner. If they still wish to continue to honor their family member or veteran they can re-up with a new banner. People can also donate a banner to a local veteran who may not have the means to afford one or a family to honor them.

“I already got a sponsor for me and I only asked one person,” Bruno, a Purple Heart and Bronze Star recipient from his service in Vietnam, said.

The American Legion post is also supporting the VFW in any way they can, Commander Lyle Maddock said. Maddock is the commander of the Blanchard-Currey American Legion Post in Delmar which recently changed its legion name to honor WWII Medal of Honor recipient Francis Currey. Currey is a well-known veteran in Delmar and the American Legion is buying a banner in his honor.

The VFW is working with National Grid to iron out the final plans for the banners. Although the town of Bethlehem has taken on a more of a cheerleader role, Town Supervisor David VanLuven is excited for the program.

The VFW initially went to the town to run the program, but VanLuven advised that the town couldn’t do that because of freedom of speech laws. The town can regulate the shape and size of banners, but cannot regulate messages.

However, VanLuven put Thornton in touch with National Grid, which has no requirement. Even on the sidelines, the town believes that the banner program will make the streets and community better.

“The community is made up of people who have served in many different ways,” VanLuven said. “I think that recognizing and celebrating our veterans and [active service members], reminds us and our community of one of the many ways people are making sacrifices to support the quality of life we have here.”

The banners cost $275.00 and can be purchased through check payable to VFW Post 3185. Honorees are shown on both sides of the banner with a small write up of the honorees’ service. Veterans, active-duty service members, reserve members and National Guard members can be honored through the program.

Other information can be found at militarytributebanners.org, or by contacting Art Thornton at [email protected]

“A lot of people don’t know how many veterans are in Delmar,” Bruno said. “They served their country, it’s the least we could do.”

Summer in Saratoga with music returning to SPAC