PHOTO GALLERY: Albany police use force to clear out encampment in front of South Station

by Jim Franco
in Galleries
0 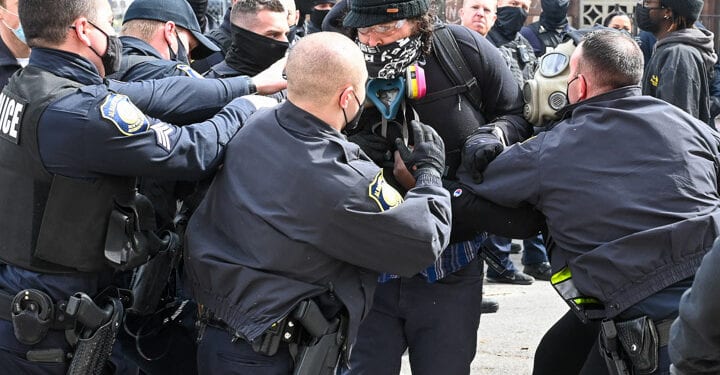 ALBANY — Police gave protesters in front of the city’s South Station, where they had been camped out since Saturday, April 17, 15 minutes to clear out.

When they didn’t move, police forced the demonstrators off Arch Street and city crews threw the makeshift encampment in the back of trucks and were seeing spraying down the graffiti-laden police station.

At the start of the maneuver, police were not wearing riot gear and did not have shields of helmets.

But, when protesters refused to pack up, at least 50 officers barreled through the encampment, pushing a number of protesters to the ground and arresting a handful. Tents were smashed or ripped apart and the protesters were corralled behind a barricade that was established at the intersection of Grand and Arch streets.

At 3 p.m., Albany Police Chief Eric Hawkins said it was “time to end this unlawful occupation.”

At 4:40 p.m. Protesters continued to scream at a line of officers, who stood there stoically behind shields.

On Saturday, the protesters marched from Townsend Park, where a rally had been scheduled to demonstrate against police brutality, to South Station where they had set up the encampment complete with a fire pit, tents and other makeshift shelters.

Click on a photo below to view a slideshow of the rest or this LINK if you don’t see the gallery.

BETHLEHEM LIBRARY: Earth Day out and about