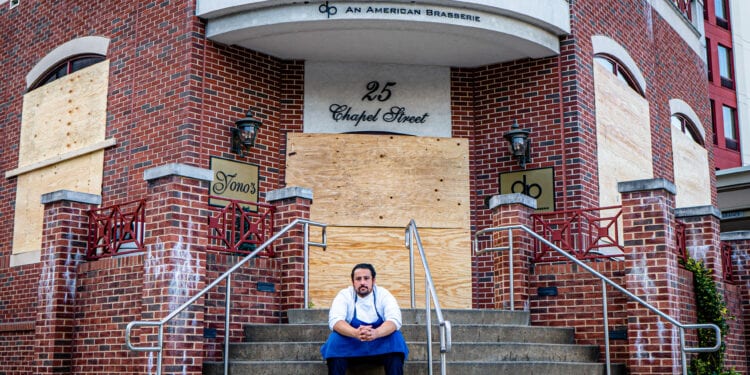 ALBANY — Discover Albany is about to bestow one of its most prestigious awards on one of the 518’s most prolific restaurateurs.

Dominick Purnomo, co-owner of dp: An American Brasserie and Yono’s, will be honored today, Wednesday, April 28, with the Professor Anthony J. Strianese Hospitality Excellence Award, affectionately referred to as “The Toby.”

“Discover Albany is thrilled to be able to honor the work that Dominick has done throughout this last year to support our community through Feed Albany,” said Jill Delaney, president and CEO of Discover Albany, in a press release. “While there is no way to truly demonstrate just how greatly our board and partners appreciate his service, The Toby award is a genuine token that we hope he finds meaningful.”

The Toby is named after the late Professor Strianese, an instructor and chair of SUNY Schenectady’s School of Hotel, Culinary Arts, and Tourism and co-author of several hospitality textbooks. The award gives special recognition to travel business as an integral part of this region’s economy. While there are many regional awards, The Toby is devoted solely to highlighting those who represent the peak of planning, execution, and professionalism within the travel industry. This award will continue to honor travel and hospitality entities for their leaders who display the core ideals of the industry and the role they play in our regional economy.

“As someone who long admired Toby’s life and career I’m honored to win an award based on his legacy,” Purnomo said in a press release. “Thank you for recognizing the tireless hard work of the hundreds of volunteers who have selflessly given and continue to give their service to Feed Albany over the last year. I’m humbled to accept this honor on behalf of our board and founding members, our staff and everyone in the community who has gotten us to the point we are today. Our hope is that Feed Albany will inspire others to serve our community and to spread love and hospitality.”

Feed Albany is a project that was born at the beginning of the COVID-19 pandemic. Purnomo, who learned that many Capital District families rely on school-subsidized meals to feed their children, put out a tweet on March 14, 2020 asking his network if there was anything they could do to help feed some of the area’s children.

“As a father of three, the thought of a child not having food because they’re not at school broke my heart,” Purnomo said. “Many of these students’ only meals are those they get at school, and I knew I wanted to help fill the void once schools shut down.”

Purnomo connected farmers and distributors and started working with some school districts. As the days wore on, he noticed many families were going without because parents were being either furloughed or laid off and many workers, including those in restaurants and hospitality, were forced into the cold.

By March 23, Purnomo had gathered a network of people from all over the area and started a GoFundMe. The group includes Jason and Kay Pierce, Matthew Peter, Christine Tate, Joe Bonilla, Francesca Pardi, Dennis Pitaniello, Christine O’Neil and Tiffany Orner, amongst the dozens of team members from downtown’s various businesses. With the money, the group, now named Feed Albany, made 1,000 meals on the first day.

“We wanted this to be a no questions asked kind of scenario,” Purnomo said. “We arranged it so anyone who needs food can stop by and grab it. We didn’t need the reason why they needed it, we just wanted to help.”

One day last year, Feed Albany had as many as 23 drivers on the road and delivered 4,000 meals. Drivers were also dropping off groceries to families.

“We wanted these meals to have some dignity,” Purnomo said. “We wanted these people to feel special. The personal care items, the desserts, the groceries; it contributed to this effort to bring some happiness to those who were really struggling.”

McGeary’s owner Tess Collins was one of the many in Purnomo’s ranks. The beloved “Mayor of Albany,” as her regulars lovingly coin her, was working off the grid. She was coordinating things like paper towels and toilet paper and working to trade with other restaurants when stores went down. When Purnomo had extra meals, she would reach out to her contacts in the area and hit some of the lower-income areas with meals in hand.

“I remember one day it was raining and I had loaded up my convertible and was driving around delivering meals,” Collins said. “Dominick would make sure I had some extra ones and I would deliver meals to those who were homebound or had other circumstances preventing them from getting to the distribution point.”

Collins said Feed Albany provided her and her network with an outlet to see one another despite restrictions. As team members would load up their cars, they would be able to talk and check in with one another. The circumstances brought downtown closer and allowed the team to get the heartbeat of the city in perspective. She was also receiving help from Albany Mayor Kathy Sheehan, the Downtown Albany BID and Capitalize Albany, who helped her and her neighbors navigate some of the rules involving patio dining and the restrictions that were being handed down by the state.

“Especially after this, I don’t want to be anywhere else but in my neighborhood,” Collins said. “The bonds we’ve built with our customers are second to none. The people who have moved in and become regulars to McGeary’s are now as much a part of this family as those who have been here for years.”