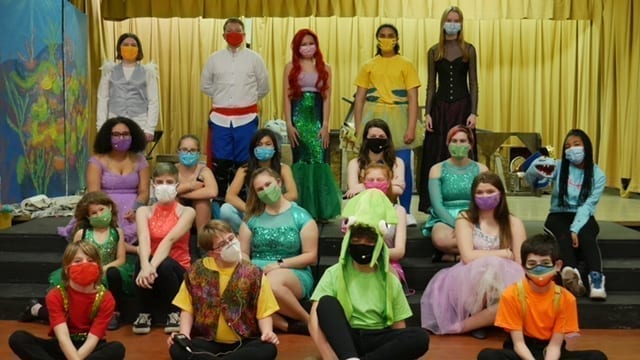 DELMAR — Marquez Stewart is the director every thespian dreams of.

Bright, precise, detail oriented, witty: the Cue Theatre’s mind behind the madness is always right there. When students are slightly overarching their backs in a dance move, she’s the first to run through the number 20 times until it’s perfect. When others show a lackluster approach to floating around the main characters in a dance number, her imitation of the students is both bold and brazen.

Because she’s right there, her students are growing as actors. These aren’t children; these actors could be the next Broadway stars.

Stewart is directing Cue Theatre’s latest production, “The Little Mermaid Jr.” Like its last production, “High School Musical Jr.,” Cue is using smaller rehearsal blocks and technology to give the community the full theatre experience without physically being at the theatre. The show will stream on May 15 and May 16.

“The Little Mermaid” “tells the story of a mermaid princess named Ariel, who dreams of becoming human and falls in love with a human prince named Eric, which leads her to make a magic deal with the sea witch, Ursula, to become human and be with him.” Ursula’s intentions are less than pure, and Ariel and Eric are sucked into a vortex of misunderstandings and spells.

“So much has changed since High School Musical,” Stewart said. “In the time that we’ve been working on these productions, the CDC has changed distancing guidelines for our situation from 8 to 12 to 6 feet. It’s been a lot of communication with both students and parents to figure out how to best produce a musical we can be proud of.”

Unlike “High School Musical Jr.,” this production is a little more intricate. While actors were supplying their own clothes for the previous production, there are actual costumes made for “The Little Mermaid Jr.” There are discernible props instead of a handful of sets that can sometimes quadruple their purpose. At the right hand corner of Cue’s rehearsal space in the lower level of First United Methodist Church, rocks made of paper mache and newspaper sit. During rehearsal, as many hands were painting backsplashes while others were making coral out of pool noodles that were on the rehearsal floor.

“One major thing we did this time is plan to have understudies for each part,” program director Stacy Sansky said. “Because there are no guarantees with COVID-19, we wanted to make sure we were in the best space to put on the show if someone gets sick.”

Stewart and Sansky said some of their actors are so worried about being able to perform that they willingly go into quarantine in the two weeks before the show.

Sansky’s daughter, Zoe Silvestri, serves as “The Little Mermaid Jr.’s’’ stage manager. While the actress is sitting out of this production, she’s been acting since she was in second grade and has been with the Cue for many productions. She was in “High School Musical Jr.” earlier this year.

Silvestri handles the required temperature checks needed from each person attending rehearsal and making sure all COVID-19 questionnaires are in compliance. Downstairs, she’s the keen eye that backs Stewart up; Silvestri, 15, will give her peers pointers on how to dance or how to deliver a line with more enthusiasm.

Silvestri’s peers include Ben Laderas, 15, and Catherine Fitzgerald, 14. Laderas is portraying Grimsby, Prince Eric’s loyal sidekick and Fitzgerald is portraying Ursula, the villain of Ariel’s ocean and the master of Flotsam and Jetsam.

“For me, I’m not portraying Ursula,” Fitzgerald said. “When I’m there, I am Ursula. Getting into character allows me to remove those boundaries and come off more naturally as Ursula.”

Ursula is grand and dramatic, something the 5’10” actress pulls off with ease. As the character uses manipulation and intelligence to scheme her way to power and further her own agenda, Fitzgerald is tasked with portraying someone as cunning as they are obvious.

Laderas is facing the same tasks. Grimsby’s character is loyal to a fault, and Laderas finds himself working on how to best express those emotions.

“I really want to try to show the connection between Eric and Grimsby,” Laderas said, “and I find myself having to really get into the mindset of Grimsby to be able to accurately portray how big of a character he is in the show.”

Stewart said the dedication of her cast and the sacrifices they continue to make for each show is what has really made the Cue stand out.

“These young actors already have the talent to do this,” Stewart concluded, “and to see them keep making the effort to improve and showing up each week has made all of the obstacles we’ve been facing worth it.”

Jocelyn and Chris big winners at the 2020 Eddies Music Awards