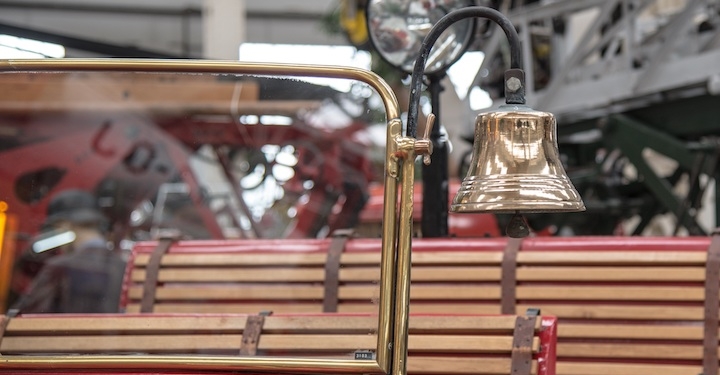 Albany is rich in history, but there was one segment of the area’s story that is underrepresented at local museums that contributed to the city’s growth and success. The new Albany Firefighters Museum and one of its creators, Bill Tobler, plan to share that history through exhibits that share artifacts dating back to 1773.

“Everyday we’re discovering something new,” Tobler said. “We always find something that juts off to another avenue to explore.”
On Dec. 8, the museum opened its doors for an event that featured Albany City Historian Tony Opalka where he invited visitors to take a trip back 240 years to the start of the volunteer firefighter period in Albany and work their way back to the present day. It also featured a unique type of auction that included parts of a historic Albany fire truck, to raise money for the facility.

The event was one of the first public events for the museum since the pandemic. However Tobler believes that the pandemic helped the museum gain more information about individual firemen who served on the Albany Fire Department. In the few times that the museum was open to the public this year, visitors from as far away as Arizona and Los Angeles told stories of distant relatives who served.

“There’s not too much literature written by the guys themselves,” Tobler said. “It’s a hit and miss.”

A lot of the physical history, like reports or stories, no longer exist or are proving to be hard to find. The reports filed by the department were destroyed in a fire at Albany City Hall in the 1800s. Historians have no way to tell how many reports burned with the building.

However, Tobler and other active or retired firefighters did catch a bit of luck. The team found a ledger dating back to 1801 that listed every Albany fire company in service until 1867. 10,000 individual firefighters who served during that time are listed.

“We’re trying to explore the individual firefighters,” Tobler said. “We find a little information on a person and try to develop that as far as we can.”

The museum fundraised in a unique way at the event, by auctioning off parts from the 1986 American LaFrance fire truck, Albany Engine No. 1. It is a historic truck because it was the first one manufactured by the company in its Century 2000 series. The museum wanted to preserve as much of the engine as possible and figured that an auction would be the best way to raise money to do so.

“We’re going to restore the cab and put that in the museum,” Tobler said.

Tobler and the rest of the museum team were pleasantly surprised with the turnout of Wednesday’s event. Many in attendance were firefighters; some retired, some active with a mix of both volunteer and paid service. Others in attendance were police officers, fire history buffs and families.

“We had more people in attendance than expected because we had to set out additional chairs,” Tobler said.

The goal of the night was ultimately to raise money to continue the museum’s work of figuring out the past. In total, the museum raised about $1,000 from the event. Much of that money came from the silent auction. Four pieces were sold off Albany Engine No. 1, the most expensive, a pump panel, sold for $310.

“The pump panel was sold to a retired Albany firefighter,” Tobler said. “They served as a pump operator on this pumper in the 1980’s and 1990’s at many fires.”

The night seemed like a success to Tobler and the museum team with them looking hopeful to the future. The fundraiser ultimately reminded the team of the importance and significance in retelling the history of fire service in the capital district.

In 2014, Tobler and other retired and active firefighters thought there should be a firefighters museum. Tobler jokes that they were completely unaware what they were walking into. He says there is a real passion for this museum, not just for Albany, but the entire capital region. In the early days of the museum, the team realized that local firefighting history went further back than they thought.

With Opalka’s help the team were able to find artifacts like the ledger and access to the common council minutes that weren’t destroyed in the Albany City Hall fire. The minutes were saved because of the multiple editions made that weren’t kept with the reports. There still isn’t a lot of information to get from the minutes, so the team also relies on the newspapers from the time and visitor stories.

There have been other big finds that the museum found themselves or been given. One of those finds is the records of about 20 men who transferred from volunteer companies to the paid department. Out of the 20 firefighters, five were killed in the line of duty by 1890.

“We feel like there’s a brotherhood between that group that we can’t just totally dismiss,” Tobler said.

A unique and important artifact to the museum is a 18 karat solid gold badge with a diamond inlay and other jewels. The badge was donated by a retired Albany firefighter and is originally from the 1890’s. There are many artifacts and interesting stories that go along with them on display at the museum.

Tobler hopes that the event made people aware of the museum’s existence, but also that someone comes in with stories, information or documentation about a distant relative that served with the department.

“We think, in some ways, their stories should be told,” Tobler said.

The men of the Albany Fire Department from 1773 to now have contributed to the growth of America. Their contributions should be seen and Albany Firefighters Museum is fighting to make that happen.

Bethlehem Public Library news: Take a walk on the wild side