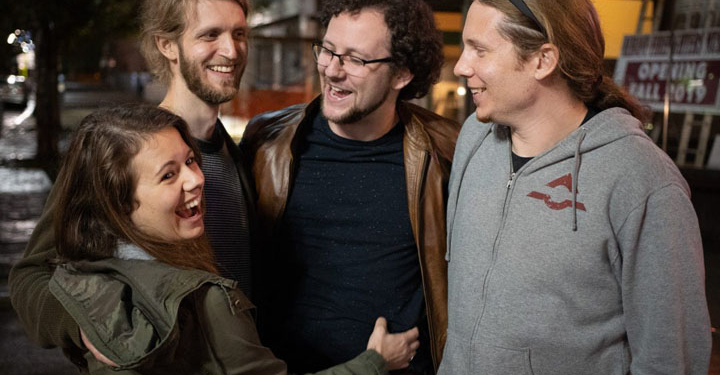 Glass Pony has an album coming out soon, but no time has been set for its release just yet. Nonetheless, the four-piece psychedelic groove circus captured scenes in Greg Pittz’s hometown of Delmar and made a trippy, lyric video for the band’s latest track, “Daydream.”

The video captures the four walking through the woods, climbing vine-choked trees and blissfully enjoying a carefree summer afternoon.

“We shot the video last year with Erik Flora, who plays in the local indie band Stellar Young,” Pittz said. ”It was filmed in Delmar off of North Street and at the Wright Lane bike park.”

Pittz said the bike park was once land that belonged to his family for generations before it was recently sold to the town.

“It was cool to shoot this in the woods that I played in as a kid.  They had tons of magic back then, and still retain that vibe today,” he said.

Cool photography tricks with the camera’s focus compliments the daydream feel of the song. The video was shot, directed and subsequently edited by Flora. Eddie Hotaling engineered and mixed the audio production. The music was mastered by Ravena native Raelynn Janice, of Infrasonic Mastering in Nashville.

Glass Pony is currently touring in North Country with stops in Plattsburgh and Burlington along the way. The four are scheduled to play at Parish Public House in Albany on Saturday, Oct. 23.

Bad Mothers’ ‘Everything is Alright’

Bad Mothers dropped the first video off it’s anticipated debut album from Shooter Jennings’ Black Country Rock label. Those paying attention will recognize the track from the band’s appearance at the Palace Theatre earlier this year through Nippertown’s and The Spot 518’s March Madness inspired tournament. The video offers no frills or whistles, just the four doing what they do best musically within a dark studio with both dramatic and strobe lighting. At times, you see members of the band sharing time behind two, metallic masks that are in the shape of a skull and a wolf. In two days, it’s garnered attention with more than 18,000 views as of Sunday, Oct. 10.

Hasty Page has been one of my favorites for awhile now. The band is a product that’s two-thirds The College of Saint Rose and one-third Berklee College of Music. A talented trio destined to go far, and already has.

The band’s latest single “Wire” has been out since this summer and has received air time on local radio. Up beat with Josh Morris back on the mic – he more recently plays drums with Dark Honey and Girl Blue, among others. The video is a touching montage of clips through the years capturing the band from as far back as their high school days In Queensbury to rocking crowds at The Hollow, Jupiter Hall and more. It’s the kind of thing you’d expect to see on graduation day.