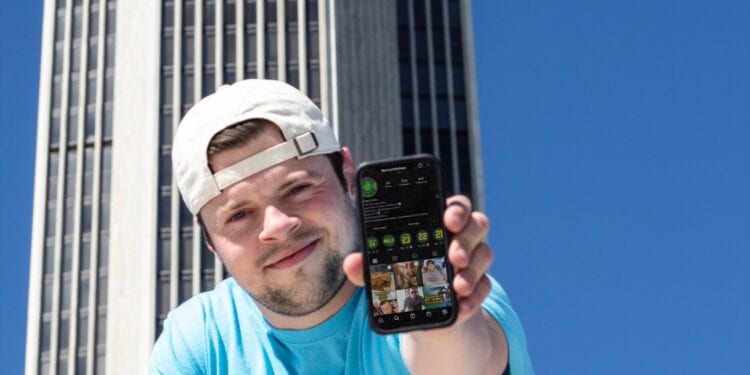 The Bethlehem Central High School alum and SUNY Oswego grad is all over the 518 map. He has connections in every corner of the Capital District. His personality is as loud as it is bubbly — a magnetic force draws people to him and his antics, whether they be zany or charitable.

Rhatigan is known for his local sports announcing, but the pandemic forced him to shift gears. Now stripped of the social atmosphere that forged those connections, Rhatigan is using his degree in broadcasting and communications to redefine variety shows in the area.

“The Back 9 Show” is Rhatigan’s baby. It’s a bite-sized, on-the-go entertainment segment featuring food reviews, sports commentary, rankings and hilarious misadventures. He’s interviewed superstars from the area, including basketball star Jenna Giacone, personal trainer Patrick DeVoe and 518 Spidey. The entire premise of the show, named after the last half of a golf course, is supported by the number nine; instead of ranking things from one to 10, he ranks from one to nine. His episodes tend to hover around the nine-minute mark, although ones as of late are stretching a bit more, and his content somehow incorporates nine into itself, whether it be nine-question interviews or, on more mature antics, say nine shots of liquor.

“I think so much of what we’ve accomplished so far is because of Brian’s ability to find inspiration in his surroundings,” “The Back 9 Show” co-producer Danny Ball said. “He knows so many people, and he’s loved by everyone, that he’s able to translate his unique personality into content that people can relate to.”

“The Back 9 Show’s” content can border on PG-13. Rhatigan isn’t embarrassed about poking fun at upstate stereotypes (tank tops and kegs for spring, anyone?) or doing drunk, F-bomb laced Irish car bombs with his older brother, Brendan. However, the mature folds into the family-friendly content effortlessly, where Rhatigan can be seen taking on a workout at Delmar’s Metabolic or trying Guy Fieri’s latest delivery conquest, Flavortown, which is hidden in the kitchen of Wolf Road’s Buca di Beppo.

“I’m just having a lot of fun with this because it’s content I like to make,” Rhatigan said. “Danny, [co-producer] Joe [Foley] and I have been friends for years and when the pandemic hit, they were forced to come home from out of state. We got the ball rolling and would meet and create content either at night, at the crack of dawn or on work breaks. We would find the time to be as dedicated to this concept as possible.”

Foley said the evolution of “The Back 9 Show” since last summer is apparent. While he credits Rhatigan’s presence as a big reason for the show’s success, the growth in both editing and the quality of the content itself is just as impressive. What were once short clips taken with a smartphone at a local burger joint are now longer schpiels with musical accompaniment, sound effects and smart camerawork.

“We’ve learned all together how to produce content of this caliber,” Foley said. “Sometimes these shots will take over 20 takes and we’ve learned how to make the process seamless and not as overwhelming. Brian has taken the lead in a lot of ways, but Danny and I have just as seamlessly fallen into our roles and we all complement each other so well.”

Rhatigan insists “The Back 9 Show” wouldn’t be what it is without his two best friends. He also credits cameos from Brendan Rhatigan as a reason people of all ages are swallowing the content so easily.

“Brendan is nine years older than me and he’s always been the one to remind me to just be myself and not care so much what others think,” Rhatigan said. “Our family loves to have fun and I credit so much of who I am to the lessons my family has taught me.”

“The Back 9 Show” is sponsored by Stay Thirsty Co. and The Basement Media, an upcoming podcast platform. While “The Back 9” has a huge video component, the three men make sure commuters can tune in with audio podcasts available on all major platforms, including The Basement. Rhatigan said the support from his sponsors has been a huge pillar of strength; Stay Thirsty created show merch that he says has done extremely well.

“I felt like the annoying one at the beginning of this journey because I would force Danny and Joe to take dozens of takes and I would feel like I was wasting their time because I couldn’t get things right,” Rhatigan said. “But to know my best friends believed in me enough to see this vision and to see where we are now is pretty incredible.”

To tune into “The Back 9 Show,” visit instagram.com/theback9show.