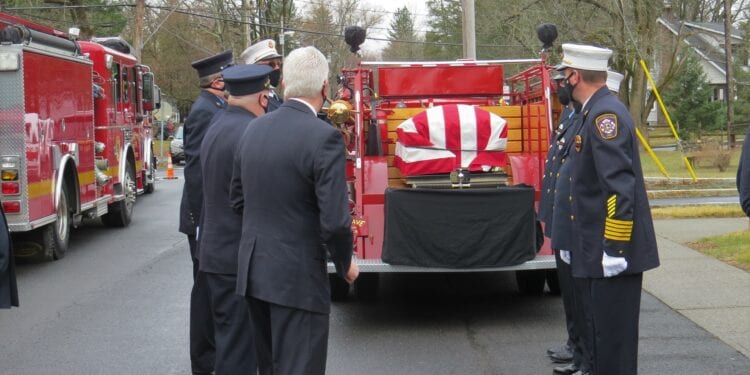 SLINGERLANDS — Dave Eck said of his brother, Walter, his life of service was represented by his motto, “deeds, not words.”

The two shared both a name and a love for service as volunteer firefighters. They were among the first responders clearing the rubble after 9/11, Dave Eck said being together helped them both cope with the horrors they saw. It brought them closer.

“Billy had a mission to be half the man our father was, and he far surpassed his goal,” he said.

Dave Eck said the two spent their lives together as best friends, and felt fortunate about the times spent together this past year.

“I was fortunate enough to be living with him for the past year and a half and the memories — the breakfasts, the functions, the fishing — are the best times of my life.”

The former Slingerlands Fire Department Fire Chief was remembered by his crew shortly after the news of his passing circulated around town.

In a statement shared online, the fire department said, “our hearts are broken.”

“Our world has been turned upside down,” the Slingerlands Fire Department shared in a statement posted that evening. “He was one of the strongest, most caring, big-hearted persons you could know.”

Slingerlands Fire Department Chief Craig Sleurs called the loss devastating and said he reflected upon Eck’s lessons as he prepared for the funeral services last week.

“Billy was the one we looked to when we had any sort of gathering,” Sleurs said. “We would look to him and he would advise us on how to be respectful and do things the proper way.

“I thank God I was listening all those times,” Sleurs said. “I don’t know how I would do this otherwise.”

Elsmere Fire Department Chief Marc Futia called Eck a close friend of his crew. “He has been there for us in good and bad times,” said Futia. “Please keep Billy’s family in your prayers.”

His crew in Slingerlands further described him as a mentor with a remarkable sense of knowledge and love for fire service.

“Billy cared immensely for all his firehouse ‘brothers and sisters.’ And, of course, he was a devoted father and “Poppy” and was so very proud of all of his children.

“We will miss you Chief, we’ll take it from here. RIP.”

Bill was born in Albany on June 29, 1959, the son of the late Walter W. Eck Sr. and Annette “Cookie” Eck. He had been employed at Knolls Atomic Power Laboratory in Niskayuna for 35 years as a current fire protection engineer and a past captain of the organization’s Firematic unit.

Bill lived for his family and helping others. He had a warm, giving heart and a way of making people feel special. Bill was never without a treat to pass out to everyone he came by.

Bill was a 9/11 first responder, something his family was immensely proud of.

Relatives and friends were invited to call at St. Thomas the Apostle Church in Delmar where a funeral Mass was celebrated in the church. Burial was in Calvary Cemetery in Glenmont.

The family requests that flowers not be sent. Instead, those who wish may send a remembrance in his name to the Slingerlands Fire Department Benevolent Fund or the FASNY Firemen’s Home, 125 Harry Howard Ave., Hudson, NY, 12534 Attn: Activities Director.

Michael Hallisey and Kaitlin Lembo contributed to this article.