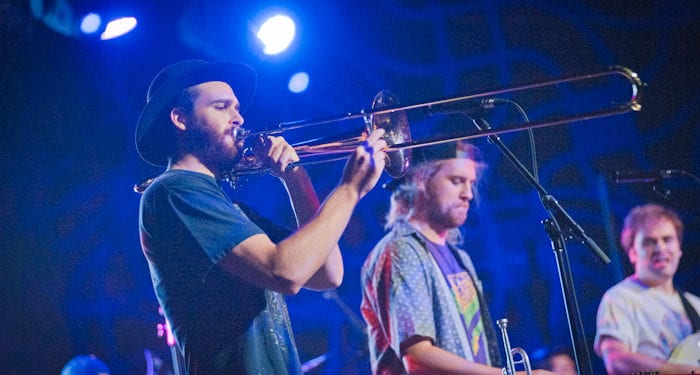 kyloft was the scene for WEQX’s last Battle of the Bands in 2019. Michael Hallisey / The Spot 518

GUILDERLAND — Skyloft has called an end to its excellent adventure.

The live music venue at Crossgates Mall shared the announcement online over the weekend, citing virus concerns and restrictions as the cause for its closing.

“These times of uncertainty have taken their toll on all of us, and though we have been fighting the good fight, we, like countless other live entertainment venues, have unfortunately succumbed to the concerns and restrictions brought forth by the COVID-19 pandemic,” stated a spokesperson on Facebook.

The comments that followed included a laundry list of shows and bands the room hosted over its short lifespan at Crossgates Mall. It opened its doors in April 2019. Because of virus-related shutdowns, it wasn’t able to celebrate a full year.

While it was open, Skyloft was one of the premier rooms in the Capital District. The restaurant was separated into two rooms, with one exclusive to live entertainment. The venue boasted one of the largest stages in the area while accommodating up to 650 people. At least at one point, the sound was managed by Denis Entertainment Group. Owned by the same group that managed Daryl’s House in Pawling and two more stages in Laguna Beach, California, it was able to lure sought after bands to Albany.

Skyloft shared its gratitude towards a music scene that welcomed the venue with “open arms.” In addition to bringing in acts from across the country, it catered to the local talent, too. The room became the home for WEQX’s annual Battle of the Bands, supplementing Jupiter Hall after it closed its doors in early 2019.

“Our mission was to reignite musical tastes across the vast genre spectrum, and provide a full scale home for the area’s live music community,” stated a spokesperson. “Without our patrons, our artists, and our staff, we would not have been able to accomplish our goals, and we wish to acknowledge our deepest appreciation for all three.”

In the end, it took a page out of Bill & Ted’s Excellent Adventure, saying goodbye by asking all to “be excellent to each other, to yourselves, be safe, and party on.”

“I’m lost for words, right now,” Deneice Coleman stated on Facebook. The Albany resident admitted how she “never” goes out, but paid the venue a visit only after hearing about it from friends. “When I tell you, it was the most awesome experience I ever felt. I really enjoyed myself each and every time I came there to party.”

Skyloft’s announcement comes just days after Lark Tavern placed a For Sale sign in its window. The storied Albany venue was the go-to place for music, especially as Tess Collins encouraged local talent to take its stage.