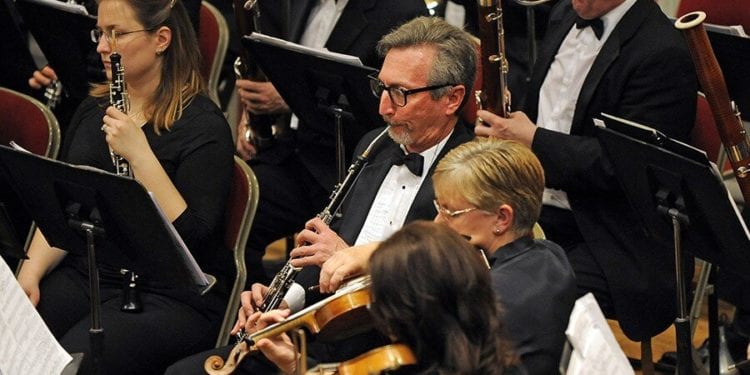 ALBANY — The Albany Symphony has announced the retirement of Nathaniel Fossner, the passionate and beloved principal English Horn musician who has been part of the orchestra for more than four decades.

“The Albany Symphony has been at the center of my life since I was a toddler. I was honored to hold the position of principal English Horn for more than 40 years until this past August. But my connection to the orchestra goes much deeper, beginning first with my parents, who served as principal oboe and keyboard players for the Albany Symphony in the 1950s,” said Fossner.

Music Director David Alan Miller said he has thoroughly enjoyed having Fossner in the orchestra for so many years.

“I love his soulful, very expressive English Horn playing, and his always constructive, positive approach to everything,” Miller said. “He is always so supportive of his musician colleagues and the orchestra, and is a lovely, warm, intelligent person.”

Fossner spent 30 years teaching instrumental music in Capital District public schools and loved it. He believed nothing was more gratifying than seeing his students awaken to the beauty and power of music – especially when they could make direct connections to their studies by seeing the Albany Symphony live in concert.

“Even more impressive was when they took that appreciation and turned it into lifelong music-making that brought joy to their families, schools, and religious practices. Over the years, I have watched with pride as each new generation takes up the mantle of sharing the gift of music as players and teachers,” he said.

Fossner has played for many Albany Symphony music directors through the years including Maestros Hegyi, Simon, Lloyd and Miller.

“I think I can speak for all orchestral musicians when I say that we all just had to perform the great symphonic masterpieces on our chosen instruments, Fossner said. “Musicians in all genres feel that musical thought is so compelling both emotionally and viscerally that they just have to play those notes and send the feeling out to our listeners. For me, orchestral music has a transformational impact on its listeners, uniquely valuable in and of itself.”

During his tenure, Fossner also dedicated his time and energies as a teaching artist in the orchestra’s Symphony In Our Schools program from its beginnings; supported his colleagues as union steward for Albany Musicians’ Association, Local 14 and elected orchestra committee member; and brought thoughtful perspective to the Albany Symphony’s strategic conversations. Fossner’s skill on stage was not limited to the English horn as he often performed on oboe and saxophone in the orchestral repertoire.

Fossner said he is extremely appreciative of the opportunities he has been afforded by the Albany Symphony and will miss his colleagues whom he considers dear friends.

“I feel so lucky to have been a member of the Albany Symphony. I had musical opportunities that were a dream come true, such as participating in dozens of recordings and performing at Carnegie Hall, The Kennedy Center, and Ozawa Hall. Maybe the most fun was playing the saxophone solos, as well as English Horn, in Ravel’s Bolero!”

The Albany Symphony celebrates our living musical heritage through its adventurous programming, commissioning and recording of new work, and broad community engagement beyond the concert hall.

Recognized as one of the nation’s most creative orchestras, the Albany Symphony has received more ASCAP Awards than any other orchestra in America, along with four Grammy nominations and a 2014 Grammy Award for its recording of John Corigliano’s Conjurer. The Albany Symphony is the only orchestra that performed in two different years at the invitational Spring for Music festival at Carnegie Hall that celebrated adventurous programming and innovative artistic philosophy.

In July 2017, the Albany Symphony’s Water Music NY tour drew nearly 25,000 people to new-music concert events in seven towns along the historic Erie Canal. In each of the canal towns, the Symphony commissioned emerging composers to collaborate with local arts organizations to create a new orchestral piece to express each town’s unique heritage.