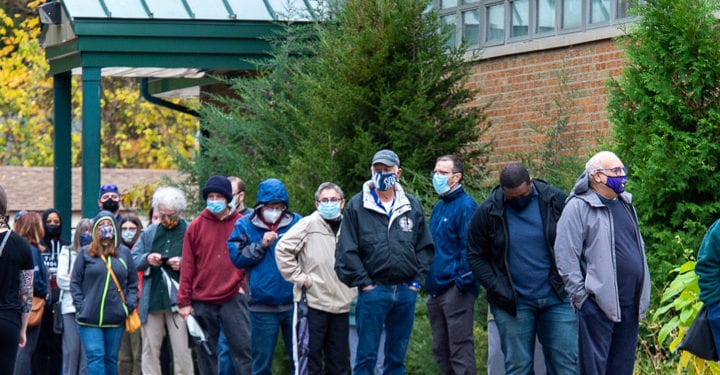 It was an unprecedented sight in New York state. Thousands of people standing in line for hours waiting to have their voice heard at the only place it really matters — the ballot box.

“It was amazing to see on Saturday how many people turned out. It was really awesome to see that many people stand in line for two or three hours,” said County Executive Dan McCoy, who drove around to different polling places with Sheriff Craig Apple. “I have not seen lines like that since I was in Iraq watching people stand in line for days on end to vote for the first time. To see it here put a huge smile on my face. I don’t care what party affiliation you are. What I do care about is to exercise your right to vote.”

There are a number of reasons for people to come to the polls early. Of course, COVID-19 plays a factor and voters could be looking to avoid long lines at the polling places. Or, they might just be itching to cast a vote for one presidential candidate or the other.

View a slideshow of polling places on Oct. 24 by clicking here.

Or against one in particular, as is the case of a voter at Pine Grove United Methodist Church — where the line came out the side door of the church, up the parking lot, along Central Avenue, down the other side of the church and around the back — who would only give his first name.

On the flip side of things, another voter at Pine Grove, Patrice, said she doesn’t like Trump as a person but does like his policies so she is sticking with the incumbent.

“I think he has done a good job with trade and the stock market was doing well before COVID and is not doing bad right now,” she said. “He is not dealing with COVID too well, I guess, but I don’t think the Democrats would do any better.”

Both Colonie residents do vote every year and neither minded standing in line for longer than they ever have in the past.

“Everyone is following it this year,” Patrice said. “For better or worse, people are watching what is going on and they all have an opinion on it. We will have to see what happens on Election Day.”

Election Day is officially the first Tuesday after the first Monday in November. This is the first year New York will allow early voting in a presidential election and absentee ballots are allowed without the need for an excuse as in years past for people afraid to go to the polls in person due to COVID.

As of last week, there were more than 34,000 absentee ballots requested and more than 17,000 returned to the Albany County Board of Elections.

“I have never seen anything like this here,” said Republican Board of Elections Commissioner Rachel Bledi while helping voters on Saturday at the Albany County Board of Elections, where the line of voters wrapped the building and headed down Pearl Street. “I’ve seen it in other states, but never here.”

There will be are locations in Albany County open through Nov. 1:

• The Albany County Board of Elections

While the race for President is atop the ticket and the minds of voters, this state will almost assuredly go for the Democrat Joe Biden over President Donald Trump, if history is any indication — A Republican has not won New York state since Ronald Regan carried the state in 1980 and 1984. There are, though, a number of local races that will be closer (see page four.) How the huge turnout, and trickle down voting trends, affects those races will not be known until Nov. 3 or sometime thereafter.