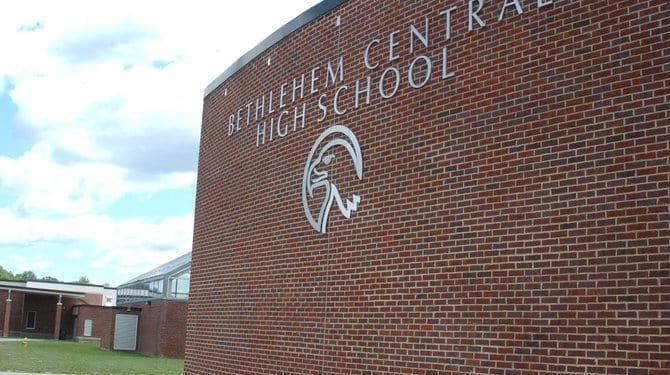 DELMAR — After Bethlehem Central was forced to quarantine several of its high school’s classrooms, Superintendent Jody Monroe pulled the plug on in-class studies for grades 9 through 12.

The high school transfered to an all remote learning environment on Monday, Oct. 26 and is to remain that way throughout the week.

It was a contentious week for Bethlehem Central, which started with three people from the high school community testing positive to COVID-19. Two of the three cases were later linked to a social gathering that allegedly was not following mitigation protocols. Monroe later learned from the county Department of Health, that some parents approved the gathering, while others have not been forthcoming with providing information to contact tracers.

In a scathing Friday evening email directed towards parents, Monroe announced 65 students and eight teachers are now under quarantine.

The precautionary measure follows a week in which the district reported three new COVID cases. Two of the three cases, Monroe said, were linked to a party outside of school, with parent permission, “where students are socializing with one another without regard for COVID safety protocols.”

Confirmed cases are climbing across the country. In the Capital District, Albany County Executive Dan McCoy announced Saturday that 32 new cases were confirmed within the previous 24 hours, raising the number of current cases to 133. Additionally, the number of people under mandatory quarantine has increased to 1,097.

The timing of this upward trend witnessed countrywide has health experts concerned over a new surge that could be exacerbated by holiday gatherings including Thanksgiving and Christmas. As of date, Gov. Andrew Cuomo has not issued a mandate to prevent trick or treating or other traditions associated with Halloween this Saturday.

There is also the issue of people failing to follow health protocols such as social distancing, washing hands and wearing masks. Monroe’s occasional use of boldface in her Friday evening mailing could be equated to yelling.

“Clearly, the impact of relaxed COVID precautions outside of school and questionable decision making can be far-reaching,” she wrote. “Dozens of students and teachers will now be displaced and forced online. Other students will lose their in-person teachers to quarantine. And further disruption or quarantine could put our entire reopening plan in jeopardy. Most importantly, the health and safety of students and staff, and their families, have been put at risk.”

Bethlehem’s numbers have only been found within its high school community. Though none of the five reported cases have been identified as either student or teacher, Thursday’s announcement suggested the latest case was a student. In her message, Monroe clearly targeted parents and guardians by reminding them of proper health protocols.

“In addition, the investigation by the Health Department has been made more difficult by the unwillingness of some students and parents to be truthful or forthcoming about their activities outside of school and/or who they have been in contact with,” wrote Monroe.

The high school was previously scheduled to remain open for in-person instruction. The district close the school Saturday for deep cleaning, and an ACT exam was moved to the district’s middle school.

All other schools in the district will remain open. Students under quarantine will attend online classes. The county health department will contact individuals directly who are required to quarantine.

“Parents… must be aware that their role in ensuring our school community remains a safe place is one we take very seriously,” Monroe stated. “Health and safety is a shared responsibility and I am asking for your help in making sure we keep our students, staff and families as safe as possible.”