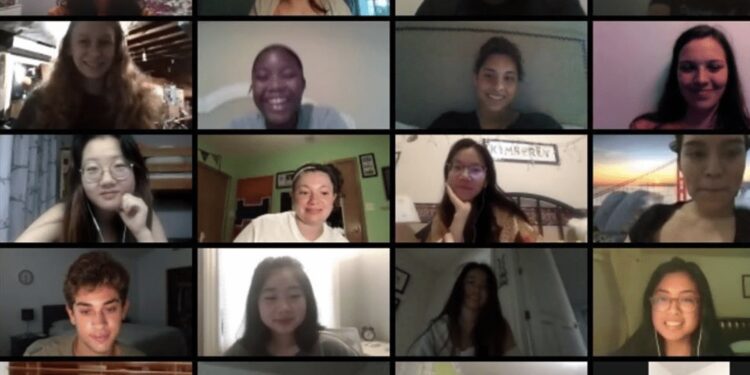 James Baldwin, an American novelist, poet and activist, once said, “The paradox of education is that as one begins to become conscious, one begins to examine the society in which he is being educated.”  A group of students have founded The Anti-Racism Education Project (ARE Project) to lean into this paradox. As the group has examined racial discrimination, they have started to question the society that educated them in the first place.

The ARE Project, now a global organization, has its roots right here in Albany with a recent Shaker High School alumna.

“Our main goal is to make continuously educating ourselves feasible through approachable content,” co-lead founder Hannah Wang, a 2020 Shaker High School graduate, said. Wang added because participants are located in different countries, group members do not assume anyone’s knowledge of anti-Blackness. Along with a palatable way to digest material many would deem hard to approach, the ARE Project has people translating content into different languages.

The group’s other objectives include giving participants tools to have educated discussions, provide materials to examine anti-Blackness within members’ communities and showing participants how to use their knowledge later in life when they may be in positions of power.

At just under a month old, the ARE Project has amassed almost 500 members in 17 countries with over 115 organizers. All are students of the digital age; over 90 percent of the group found out about its existence through Instagram. The ARE Project hopes to aggregate resources on racism from those qualified to teach on it and amplify Black voices through its digital meetings.

The ARE Project chooses its monthly content based on a theme. From there, a book, television show episode, movie, podcast episode, article and poem collection is chosen. Wang said the different medias are offered to cater to all types of learners; each participant only picks one piece of content to analyze, as more people are able to dedicate time to one part of the picture. After digesting the material, group members meet on one of four hour-long meetings a month (each accommodating different time zones) to discuss the works. The first 10 minutes of the meetings are dedicated to establishing a baseline of everyone’s cultural norms around the topic. From there, members break off into their respective content choices to analyze. For the last 20 minutes, group members converge to discuss the theme as a whole. Most content is from Black creators.

“Our project is a testament to the power of social media and our generation’s willingness to learn and fight for positive change, Wang said. “Everyone is contributing in their own ways, whether it be using their training in discussion moderating, 3D-printing pins to fundraise, or sharing their premium Zoom account with us. We have over 50 groups working on everything from maintaining our Instagram to developing community guidelines.”

From Media to Movement

The ARE Project started as an idea for a book club run by Sasha Ronaghi, a recent high school graduate in Southern California. Ronaghi had posted on her Instagram story about starting a book club to amplify Black voices. “The whole purpose of using [Instagram] is that it is sustainable and

It certainly was approachable for Wang, who saw Ronaghi’s Instagram and was inspired to repost it to her New York followers. From there, it was reposted on several other accounts including those of international students. Today, Wang and Ronaghi run the ARE Project’s meetings and have created a worldwide campaign started with the simple idea of a book club.

Anastasia Farronan also tirelessly helps the group in its early stages to create a website. Farronan had never designed or created a website before the ARE Project, but taught herself web design and continues to maintain the impressive website. Her hard work is a testament to the character of the group, who all recognize the need to learn new skills in order to get their message out.

Education and reforming how school curricula address race and issues of racial injustice are some of the main purposes of the ARE Project. However, Ronaghi, a rising college freshman, wanted to make sure the education did not stop at social media. “Social media is helpful with spreading the message, but it can almost feel like a trend or a fad.” The group now provides something social media posts do not offer: discussions.

The ARE Project aims to bring people together from all backgrounds to share their own experiences and learn from others. According to the ARE Project’s website, “We are not hoping to learn about the Black experience from our peers, but with our peers because it would provide different perspectives and experiences.” These discussions are what several members have said they learned the most from. Wang said these discussions change participants’ perspectives after educating themselves and listening to others.

‘Pray the Racism Away’

Discussions are a large reason why Amari Parker joined the ARE Project. She said as a Black woman, she wanted to join difficult conversations and develop skills to use in everyday life. Parker also expressed her concerns about social media. She said, “It doesn’t provide much of a space for discussion, but this group provides learning, discussion, and educating yourselves on implicit biases.”

The ARE Project’s reach goes beyond the blue states of New York and California. Parker is from Georgia and Luke Akhalaya is from Indiana. Both are current high school students who say even today, they can easily identify racism in their communities.

Parker talked about visiting plantations during school trips in Georgia and feeling like she did not get the full picture in school. Akhalaya spoke of history classes where his white classmates made anti-Semitic jokes and “goofed off” during slavery readings.

“The teacher just rolled his eyes,” Akhalaya said. He joined the ARE Project to gain new perspectives and hear viewpoints from outside of his hometown.

Parker attends a Catholic School in Georgia. After the death of George Floyd, her school sent out a letter condemning the violence and urging students to pray. Parker said this letter was not what she was hoping for. “I wanted to see they were taking action,” she said.

Instead, Parker has been taking action of her own. She is responsible for selecting the films for the ARE Project’s screenings and helps to participate in the group’s activism channel. This channel is used to set up calls and emails to local legislators near the participants. “There’s so many of us, it makes them realize they need to do something,” Parker said.

Akhalaya echoed Parker’s thoughts, saying, “We have to put actions behind our words.” Akhalaya believes the best way to make a change is through voting; however, he is under 18 and, therefore, ineligible to do.

For Parker, this group has also been a way to learn from her role models. While doing a research paper for school on systemic racism, she found a name that kept coming up: Courtney Cogburn, Ph.D.

Cogburn is an associate professor at Columbia University and an award-winning researcher. Her research focuses on how racism and discrimination in society can physically affect minorities that ultimately lead to racial differences in diseases. Parker’s eyes lit up with inspiration while talking about Cogburn. Parker wants to become a cardiothoracic surgeon and was thrilled when a member of the group reached out to Cogburn about speaking to the ARE Project. Cogburn is set to speak over Zoom on Monday. Through the ARE Project, Parker has been given the chance to educate herself, her peers and further her passion.

‘What We Didn’t Learn’

“While these conversations are happening inside our homes, there is still a lot of anti-Blackness in our community,” Maryam Ahmad, another Shaker student, said. “When I was in India, we had a face cream that was advertised to make your skin lighter because lighter is more beautiful in so many people’s minds. There were advertisements everywhere and so many people never really gave it any thought.” On June 26, Unilever announced in a statement its controversial face cream, “Fair & Lovely,” popular in India and other South Asian countries, would be renamed. “We [recognize] that the use of the words ‘fair’, ‘white’ and ‘light’ suggest a singular ideal of beauty that we don’t think is right, and we want to address this,” Unilever’s president of beauty and personal care, Sunny Jain, said in the company’s statement. “The evolution to a more inclusive vision of beauty that celebrates and cares for all skin tones, and no longer uses the words ‘white/whitening’, ‘light/lightening or ‘fair/fairness’, will be a policy for all Unilever’s beauty [and] personal care brands,” Jain concluded.

Priti Rangnekar, a teen from San Jose, California, has worked behind the scenes since the ARE Project’s conception. A friend of Ronaghi’s and no stranger to activism, she quickly joined to figure out how to market the group. For her, this group is a welcome change.

“My school is very much Asian and white,” she explained. “The topic of anti-Blackness only really came up in what I would call a ‘graded discussion,’ where it would come up in class for an assignment and it wouldn’t go much further than that.”

As a member of the Indian community, Rangnekar testified to the mindset in her school; you focus on your academics and your own life. If it doesn’t affect you, “you don’t get dragged into it.”

Ahmad agreed. Another member of the Indian community, she has seen first hand how racism influences her world. She considers herself lucky enough to have grown up around people who categorically condemned racism from the get-go.

A lightbulb went off when Ahmad realized how much of civil rights today are to the credit of the Black community. Rangnekar nodded her head in agreement. It struck both women to see how insulated much of the world is.

Ahmad and Rangnekar agreed that much of the group is about unlearning implicit biases people have. The project helps them seek out content from different creators, particularly from POC, to form an expanded worldview.

“Our book club has substituted what we should have learned in U.S. history,” Ahmad said.

For both, the camaraderie the ARE Project has formed is what keeps them coming back.

“I can see the sustainability in this organization because of how diverse we are,” Rangnekar said. “How we do this is motivating members to put forth the effort for good conversations that can be difficult. Since joining, I have made it a point to seek out content from POC creators and be more conscious of the media I’m digesting.”

One thing these students have in common is passion. Each expressed desire to see true change in their communities, countries and in our world. “It’s mind-blowing to me how many people care,” said Ronaghi when speaking about how expansive the group has become.

“Even though it’s the Black Lives Matter Movement, it feels more like a revolution,” said Wang. Akhalaya repeated this sentiment, saying, “I think there is a revolution coming and I think it is long overdue.”

Ahmad spoke of her generation’s want to address systemic racism in society. “It goes to show how much our generation wants to solve this issue once and for all.” Parker spoke of their generation, too, and how social media has become a tool for change. “Social media can be powerful in influencing people, movies, and press.” The group has utilized social media since its founding and continues to do so through Instagram and Facebook.

The group is open to everyone and those who wish to join can sign up through its website or on Instagram. “Seeing things from different perspectives is really important,” Ahmad said. Outside of the group, the students want to encourage the community to educate themselves. “If you are confused on why something is racist, don’t be afraid to ask,” Akhalaya said.