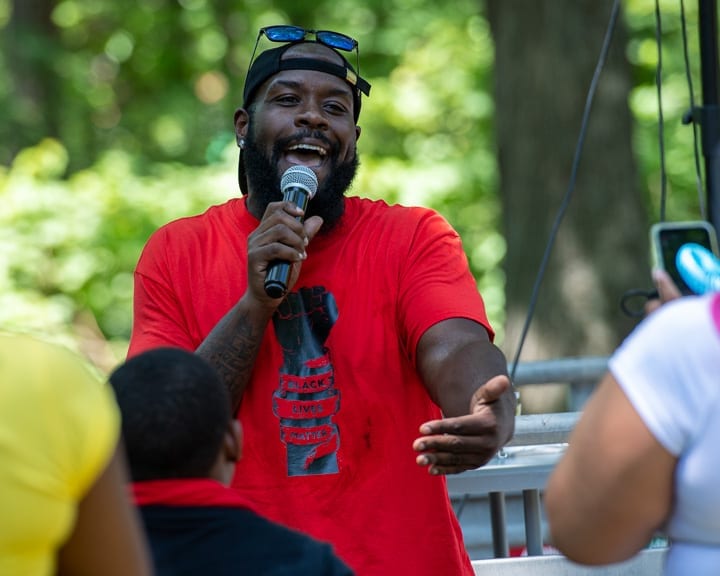 COLONIE — A Black Lives Matter rally on Saturday, July 4, started with a flash mob at the intersection of Wolf Road and Central Avenue and ended with speeches about equity, accountability and police reform at Cook Park.

Absent from the peaceful and informative rally were the more aggressive and distasteful signs and slogans like “pigs in a blanket fry like bacon” but the flash mob dance routine at one of the busiest intersection in the Capital District did stop traffic for a bit and got everyone’s attention.

At one point, one of the speakers thanked the Colonie police for the escort down Central Avenue and offering a venue at Cook Park for the mobile sound system and a place for speeches.

Floyd at the hands of Minneapolis police on May 25. Unlike some, including in New York City, Atlanta, Seattle and Albany, it was not followed by riots and looting.

Police reform was a topic, of course, and statewide reforms like eliminating “section 50-a” which makes public a police officer’s personnel record, was applauded.

Hudson Mayor Kamal Johnson, at 35 the city’s youngest mayor and its first Black person to hold the post, said in his first six months in office he signed a 26-point executive order that will reform his city’s Police Department.

It includes taking 10 percent of the Police Department budget and instead spending it on programs geared towards community service. His executive order, signed last month, also takes steps to

“demilitarize” his Police Department by not accepting drug forfeiture funds — a common way for police to justify the purchase of heavy duty equipment — without approval from his office. Police are also encouraged to wear less formal, less intimidating uniforms and his order mandates police wear body cameras at all times when interacting with the public. He also banned no-knock warrants and his officers must intervene if they see excessive force, or even excessive language being used, and all officers must attend bias and racial training.

“I am what happens when a community is tired of waiting for someone to save them. I am what happens when a community has a unified vision for change. It doesn’t matter about color creed or whatever,” he said. “It took a lot of stress and heartache. We went up against an incumbent and they had all the money and all the people and the first thing they said is Black people don’t vote. Young people don’t vote. And yet here I stand. And that is what we have to do, together.”

Lukee Forbes said BLM is a “movement and not a moment” and said there are underlying issues to why the crime rate is so high in some communities.

“The reason our communities have a high rate of crime is the amount of opportunity in those communities. A lack of funding in our community,” he said. “The difference between Colonie, certain parts, and Albany, certain parts, is where I am from there are abandoned buildings but when we go onto the other side we see green grass and parks.

Ramon Mial said police reform is “the only path out of this dark time we find ourselves in.”

“A community that lives in fear of state sanctioned violence cannot truly be a community. Symbolic

acquiesce with no political action is unacceptable,” he said. “In this special moment in our history we have been presented with a uniquely vulnerable instability in our politics giving us the rare opportunity to mold it in our likeness.”

He called for an end to broken windows policing, which focuses on enforcing the little crimes, like marijuana, loitering and jaywalking, to prevent the bigger ones from happening. He said there is a need for the civilian oversight of police departments “with teeth” and across the board use of force policy changes in all departments.

“Until black lives are no longer treated lesser than, this will not end” he said.

July 4 was the first of two rallies held in Colonie. The second came a day later and began on Wolf Road and then proceeded to The Crossings.

The rallies come at a time when there is a near unprecedented number of shootings in cities across the nation.