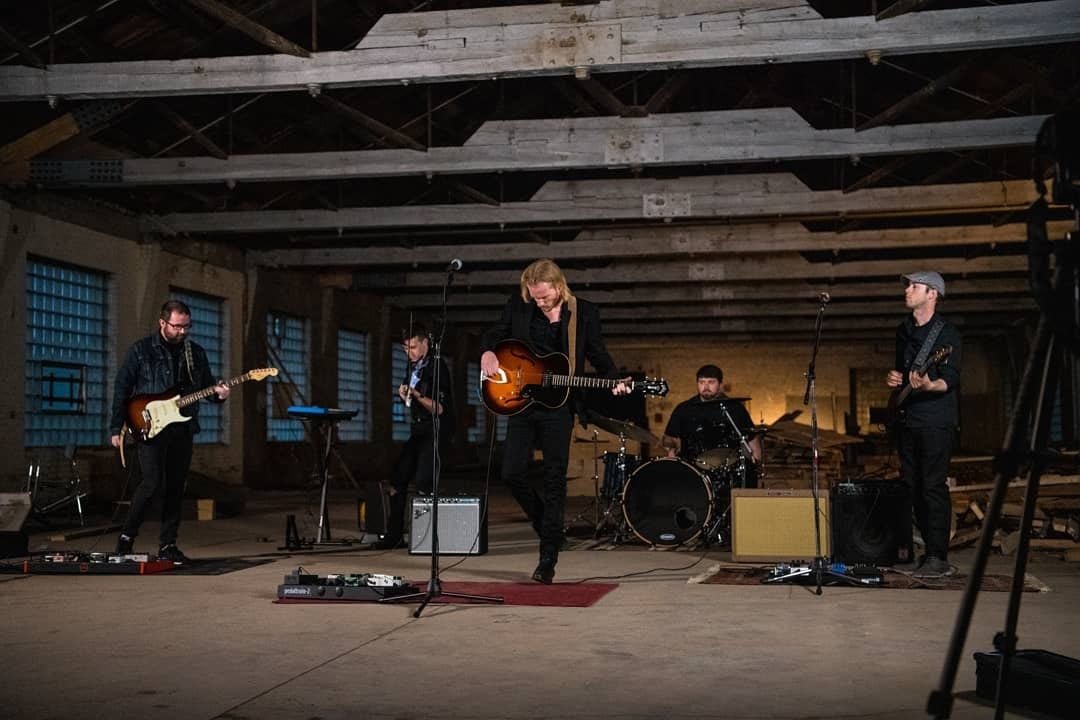 Photo by A.K. Photography and Design

TROY — Few things are more poetic than the lyrical talent of Curtis Flach.

It’s been quite the year for C.K. and The Rising Tide. The band, a five-piece Americana and folk powerhouse, is relatively new on the scene, but it’s slowly been playing every major venue and more, grabbing new fans along the way. Flach released a solo EP in 2016 before finding his band members. In 2018, the band, then only a trio and managing itself, released American Romance, a 10-track homage to the finer things in Americana. Armed with fun songs like “Friends” and slower ballads like “Road to Damascus,” American Romance ushered in a wave of success, two new members and new management.

Flach and his bandmates, who include keyboardist and violinist Danny Boudreau, drummer Rob Piccola, bassist Chris Brant and lead guitarist John Lenio (who joined the band in the last few months) are set to release 10 new songs later this month. The album, Perfect Stranger, is said to be more positive, more at peace and quite frankly, “more mature.” Set to release Aug. 16, Perfect Stranger will kick off with a show at Lost & Found Albany the next day.

“With this album, we approached things much differently,” Flach said. “When we recorded American Romance, we all recorded our parts separately and didn’t hear it all together until it was fully mixed. We actively worked as a whole this time around.”

Boudreau concurred with Flach’s statement. Boudreau, who has only been playing the violin for a few years, was concerned about his parts in American Romance. This is his first time participating in a band, let alone one that’s successful.

“I didn’t understand how I was going to write my parts because I had no idea what everyone else was doing,” he said. “Luckily, once it came together, it all worked. It was amazing.”

Flach, Brant and Boudreau were the original trio, with some help from Flach’s brother. After recruiting Matthew Copperwheat and Piccola, the band came into its own.

“I’m no longer handling a lot of production tasks, which gives me

more time to write and work on music,” Flach said. “Andrew and Rose are amazing at not only keeping us on track, but they are getting us gigs and marketing us in a way we never could have imagined.”

Andrew and Rose Gabriel are the owners and managers at the band’s record label, Ambassador Music Group. The Gabriels pride themselves in handling all the business and marketing for their clients so everyone can focus on what they do best.

“Andrew is really good at keeping us going with deadlines and making sure we fulfill whatever responsibilities we have,” Flach said. Brant added his managers are really good at keeping the group organized. All band members said Rose Gabriel is absolutely amazing with her marketing and social media management, garnering the band significant recognition.

“Between the two of them, we’ve been able to keep it moving along and stay focused,” Brant continued. “It’s been a great fit for us and I hope for them too.”

Andrew and Rose Gabriel said their business is in “permanent beta” mode. What does that mean? It’s pretty simple; they keep seeing what works for each client and then adjust the business accordingly.

The Gabriel force, who are also partners in life, has made quite a name for itself in the local community. They’ve worked with many of the acts in the Capital District music scene — including Grape Juice, Sydney Worthley and El Modernist — either through doing business directly or featuring bands on their hit live social media show, “AMG Live!”

“AMG’s slogan is ‘focus on music, we’ll take care of business,’” Andrew said. “During this album cycle, we did just that. We were pretty hands-off with the artistic direction of the album. We heard a few demos early on and knew that [C.K. and The Rising Tide] had something special in the works, so we got out of the way and did what we do best: take care of business.”

It’s definitely a lot of work. The hardest part of managing groups like C.K. is no rest.

“We get no rest because this band accepts and accomplishes every challenge we throw at them,” Rose said. “We offer feedback one night and the next night they’ve implemented it. We push them to be the best artists they can be and, likewise, they push us to be the best managers we can be.”

Ambassador and C.K. and The Rising Tide just celebrated its one year anniversary together. Flach said he’s hoping the Gabriels are drafting the second year contract. But that’s the thing — the partnership works for the band as well as it does its managers. Both parties have learned a lot about their respective roles in the past year, but neither would change anything.

“We honestly wish we found them sooner,” Andrew said. “…this year [has] made our team stronger, more connected and more ambitious.”

Attend any C.K. show, and you’ll probably see a petite blonde with a camera in her hand. If you’ve seen any artwork for the band, the same woman is behind it. Looking at most photos of the group, an A.K. Photography and Design logo is visible somewhere in the frame.

Ann Kielbasa is the official C.K. and The Rising Tide photographer and graphic designer. But she’s special — she’s been there since the group was rehearsing in a garage. She’s a critical part of the foundation that keeps it going because she’s spent so much time showing it off in her work.

“It’s been a whirlwind to watch them grow like this,” Kielbasa said. “It’s very hard to put all of these emotions into words because I’ve watched them blossom into what they are now.”

Kielbasa, while not a part of the official five-piece group, is considered one of the most important parts of the squad. While balancing her full-time job, she’s essentially working another 40-hour-plus gig keeping up with the men and developing her photography business.

“There’s such a sense of pride because I’ve seen all of the encouragement they’ve received and how hard they work behind the scenes,” Kielbasa continued. “I’ve only heard snippets of what’s coming and all I can say is wow. I can’t wait to hear the full thing.”

In regards to her photography, her goal is simple; she aims to visually epitomize the C.K. sound.

“I want to show people what they sound like and who they are without having to know the context,” Kielbasa said. “I’m so lucky to have such an insider view of this and I want to convey some of that knowledge through my lens.”

The Gabriels can’t get enough of Kielbasa either, calling her an “incredibly fun and professional person to work with.”

The Buzzards are Circlin’ ‘round

Drummer Piccola, who was recruited from Craigslist, said it didn’t take him too long to learn his parts on American Romance. Taking over for Flach, who provided drums on the first album, has been exciting.

“Honestly, I think Curtis might be a bit better of a drummer than I am,” he said. “But we all have a corner of the group that works best for us.” Piccola added he’s excited about the release because, like his bandmates, he wants to see how people connect with the music.

A chance to connect came on July 26, when the quintuple-threat released its first single from Perfect Stranger on YouTube, a hauntingly beautiful song called “Follow The Buzzards.” The MP3 track was released several days later. Boudreau explained how “Buzzards” is only a glimpse of what’s to come.

“I feel like Perfect Stranger is much more excited about the prospects of the future, while American Romance talked about things long gone and bitter loss,” Boudreau said. “One lyric that really stands out to me is ‘Follow the sweet, sweet sound / leave it all in the cold, cold ground’ because it’s kind of a way to break with the past of hurt and move into happier times.”

The music video for “Follow The Buzzards” reached 1,000 YouTube views within three days. At print time, the video is close to 2,000. Boudreau said if “Buzzards” is good, listeners will love the rest of the album.

“We’re heading more into indie rock while still maintaining our roots of folk and Americana, which we love,” Brant explained. “This album is definitely a bit different than what we released last time.” Despite the differences, the band assures fans they will still recognize that signature C.K. sound.

Flach is excited, but he’s cautious. He explained that he’s afraid to really go into how much the band’s sound has matured because he doesn’t want to “shoot [himself] in the foot.” However, he admits he’s stepped up his game. No longer the sit-in drummer with 50 different jobs — he’s now the frontman.

“Six months after American Romance, I presented some demos and it has now blossomed into this,” he said. “We’re feeling confident that we’ve been able to top what we put out last time in what’s coming soon. We’ve really been working hard on this.”

The band’s sound has evolved. What was once simple and characteristic of a band getting on its feet is now layered with advanced production and the sound of musicians who know what they’re doing. You can hear the improvement in Flach’s voice, and he’s blessed to have support from four men who are rapidly improving in their own right. It’s a pretty impressive feat, especially when you consider how all five band members work full-time jobs.

C.K. and The Rising Tide will be playing Rocktoberfest 2019, Ambassador’s one-day music festival, at Colonie Park on Oct. 5. It shares a bill with Madison VanDenburg, El Modernist, Vince Palmeri (another Ambassador talent) and more.

“I think we’re all excited to just connect with people some more,” Piccola concluded. “We use our music to convey emotions and thoughts. I’m just excited to see how the public will connect with us.”

Perfect Stranger will be available on iTunes, Spotify and in CD format.

If you want a straw with that, you may have to ask

Motorists, cyclists, pedestrians — all need to learn how to properly use crosswalks