Motorists, cyclists, pedestrians — all need to learn how to properly use crosswalks 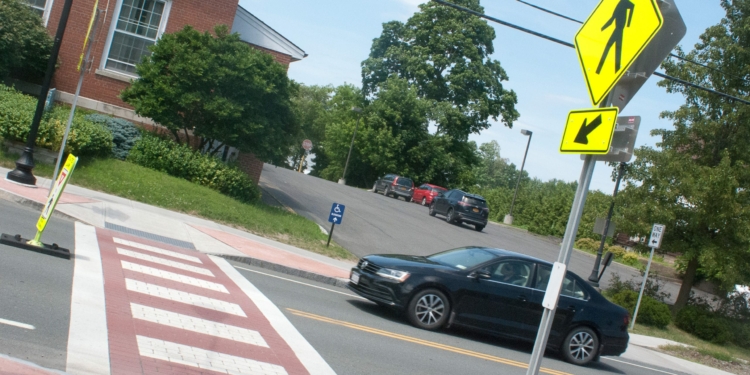 Crosswalks are meant to encourage better road safety but there is some concern that drivers, pedestrians and cyclists around town do not fully know how to deal with them, according to Bethlehem Police Commander Adam Hornick.

“The big issue about crosswalks in town is that we see a unilateral lack of knowledge about the law,” said Hornick. “The goal is to educate people about the law and promote road safety. One example is to operate under the ‘see and be seen’ mindset where you’re always looking out for other pedestrians, cyclists and drivers before crossing the road.”

Hornick said the BPD works closely with the town’s Bicycle and Pedestrian Committee, made up of a group of volunteers, and police officers often attend the latter’s monthly meetings. John “Tiger” Anastasi, the town’s Highway Superintendent, said his department is starting to join the conversation and is invited to attend the meetings too. “We’re looking into more direct communication in the next few months where I will get more involved because we want to make this community more connected,” he said.

Anastasi also said that any new crosswalk idea needs to be brought before the town’s Pedestrian and Safety Committee, which includes himself, Town Supervisor David VanLuven and Hornick. “We have a roundtable at the monthly meeting and we talk about potential traffic issues, residents’ complaints, stop signs, people’s want for more sidewalks and more,” he said.

“During the two-week period, we found that just under one third of pedestrians were using the crosswalks in town inappropriately,” he said. “The most common thing we saw is that they cross against the signal at a stoplight intersection. If an intersection is controlled by a traffic-controlled device like a crosswalk signal, it is a violation of vehicle traffic law for people to cross against that device.”

He added that the most common location where this happened was at the Four Corners in Delmar where pedestrians were often seen pushing the crosswalk button but get impatient while waiting for the signal and they cross; if a vehicle strikes a crossing pedestrian in such an incident, the pedestrian is at fault, he said, as the vehicle technically has the right of way in that moment.

He added that one day, he recalled being around the Four Corners and saw an adult male with two earbuds in crossing against the signal at the intersection. “The public should know that things like that is a recipe for disaster and you’re not going to see or hear the car if you’re listening with two earbuds and crossing when you’re not supposed to then.” Hornick also said that in terms of bicycle- and pedestrian-related crashes with motor vehicles in Bethlehem, there were seven cases in 2018 and three so far this year. Concerning violations of crosswalks with motorists, BPD has issued five citations in 2018 and three this year so far.

Erin Svare, a mother of three children and a member of the town’s aforementioned Bicycle and Pedestrian Committee, said she envisions Bethlehem to be a more walkable and bikeable community, and a place where pedestrians, cyclists and drivers practice road safety all the time. “It’s not just about safety but it’s also for health purposes where it’s great to get out there and walk instead of staying inside all the time,” she said.

Svare, also on the Hamagrael Elementary School’s Parent Teacher Association, said she has helped hand out “Roll Model Pledge” sheets for several years now to the school district’s parents which encourages them to sign a pledge related to road safety. Examples include encouraging cyclists to always wear helmets; drivers to share the road with cyclists and yield to pedestrians at crosswalks and roundabouts; drivers to never use mobile devices while driving; pedestrians to always use sidewalks and crosswalks to travel safely; and drivers to maintain a three-foot clearance from cyclists and pedestrians on the road.

“Hamagrael has so many kids walk and bike to school which is amazing but it’s important to know about road safety,” she said. “So the Roll Model Pledge is one way the town has collaborated with the schools and parents to spread awareness about what our roles as pedestrians, bicyclists and drivers are. We all have a responsibility and a road is something that’s used by all users, not just drivers.”

She added that the BPD has ordered a new lawn sign design — a yellow, minimalist sign showing pedestrians using a crosswalk safely while a cyclist and a car waits; it also bears the words, “Bethlehem Walks and Rides… Please Look Out For Us! #BeCourteousBethlehem.” The new lawn signs are available now for residents to pick up at Town Hall, located on 445 Delaware Ave. in Delmar.

One major event — a collaboration between the BPD, the Bicycle and Pedestrian Committee, and the Parks and Recreation Department — is the annual Bethlehem Walk and Roll Fest in May; it was held on May 18 this year on 250 Delaware Ave. at the Albany County Helderberg Hudson Rail Trail parking lot.

which began around 20 years ago, according to Hornick, and it has manned stations to engage with bikers and the public alike. Such stations were mostly kid-friendly and touched on topics like avoiding obstacles, weaving around traffic cones and safe stopping distances.

“It’s turned into the Walk and Roll Fest in the last two years and it’s now a huge festival,” he said. “This year, we received a microgrant from the Capital District Transportation Committee for the event. We received over $1,300 in grant money. It helped us with publicity about the safety theme and we handed out backpacks with fluorescent stripes so cyclists wearing them can stand out in the road more.”

Anastasi advised drivers to be aware that “we have a lot of elderly people in town. Just because there’s a crosswalk, doesn’t mean the pedestrian can nonchalantly travel on it without yielding to traffic. Sometimes, the road has ice or it’s wet or has many fallen leaves which can make it harder for drivers to stop in time. Use good judgment.”

Svare concluded that “seeing a shift in driving behavior will increase safety. Our hope is that by doing an awareness campaign, it will help people find the compassion they do have deep within so that when they see people at the crosswalk, they will slow down for them because I would want someone to do that for my kid.”