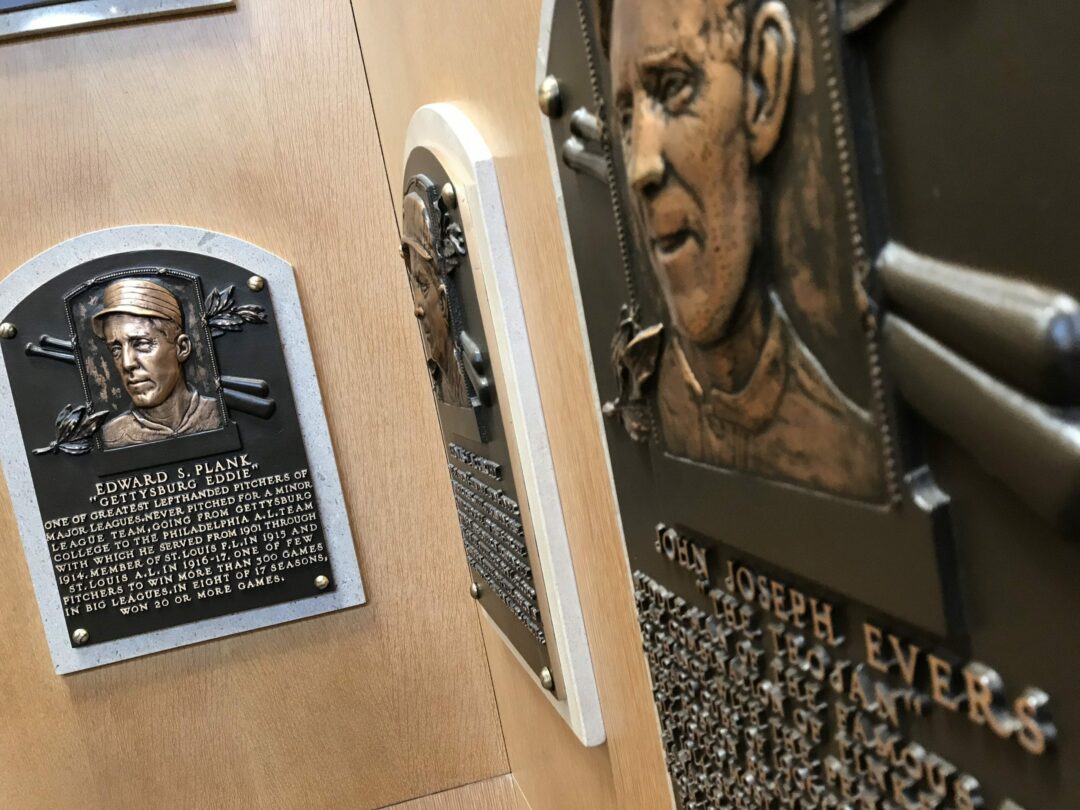 COOPERSTOWN — The National Baseball Hall of Fame will open an exhibit that pays homage to the cardboard product that helped launch the popularity of the game.

A baseball card exhibit opens on Saturday, May 25. The exhibit, spanning more than 700 square feet of space on the museum’s third floor, will examine the history, design and production of cards, the 1980s boom that turned a child’s hobby into a multi-million dollar industry and the joy and camaraderie that so many collectors have found in the hobby.

“We heard from hundreds of Museum visitors who said they wanted to see an exhibit on baseball cards,” said John Odell, the Museum’s curator of history and research who serves as the lead curator for Shoebox Treasures. “We knew that when we created this exhibit that it was going to be a deep dive, not just rows of cards in a case. We wanted visitors to see and learn about cards from the early days of 19th-century tobacco cards to today’s glossy keepsakes. Finally, so many of our visitors have a passion for card collecting, and we wanted to acknowledge and celebrate their passion for these pocket-sized gems.”

A fundraising campaign raised $800,000 to design, build and maintain the exhibit.

The exhibit will be divided into four primary themes: An exploration of the long history of baseball cards; the evolution of baseball card design; how and why fans of all ages collect baseball cards; and those cards that are considered “Holy Grails.” Shoebox Treasures will feature more than 2,000 cards on display in vertical drawers that will allow visitors to explore a selection from the Museum’s vast baseball card collection. Visitors can take a trip back in time by spinning a bicycle wheel with baseball cards in its spokes, and can make their own virtual baseball cards with six historic designs.

“For so many fans, including myself, learning to love the game came directly from our fascination with baseball cards,” said Jeff Idelson, President of the National Baseball Hall of Fame and Museum. “Shoebox Treasures transports us back to the thrilling days of opening packs of cards, looking for our favorite players, devouring the gum, and absorbing every morsel of information on them. It’s an exhibit that tells the story behind one of the most effective marketing campaigns ever conceived.”

The following is a list of beloved baseball cards from my personal collection. The worth of these cards are not measured by monetary value, but rather the memories they capture from my childhood.

Webster doesn’t see it this way, but the definition of cool is one’s

ability to own what is otherwise viewed as a ridiculous piece of fashion and making it look good. Ralph Garr had the misfortune of playing for the Chicago White Sox when team owner Bill Veeck decided to introduce shorts to baseball in 1976. The shorts quickly went away, but the butterfly collar Veeck brought in from the disco dance floor did not. Garr’s 1980 card would be his last with Chicago. It captures the image of him trotting off the field, gold chains swaying side to side, looking every bit the modern outfielder.

Nothing captured the imagination of a 7-year-old boy more than baseball and speed, and that was Nolan Ryan. His 1980 card shows him in the midst of unleashing his “100.9 m.p.h.” fastball in an Angels uniform. This card is what inspired me to play baseball. I wanted to be a pitcher. I wanted to be Nolan Ryan. His wind-up, his determined look and the added notation indicating he was an all-star helped me understand that he stood above everyone else.

Bo Jackson’s professional career didn’t last too long. The two-sport athlete played four full seasons of Major League Baseball and four abbreviated seasons in the National Football League. His playing days ended a quarter century ago but fans still gush over his feats today: His leadoff home run in the All-Star game, running up the outfield wall in Baltimore after chasing down a fly ball, or throwing a perfect strike to the catcher from the outfield warning track in Seattle to throw out Harold Reynolds. He is a sports legend on par with the elite of Hall of Famers. This image captures both the power and grace of such an athlete.

Dave Winfield was a young phenom for the San Diego Padres in the 70s. He was a rare athlete who garnered the attention of every major sport. He was selected by four teams in three different sports; basketball, baseball and football. He had a cannon for an arm, often throwing the ball into the stands behind home plate from the outfield. He often did the same thing using his bat and hitting home runs in the other direction. His 1978 card has him poised with his bat slung over his shoulder as he walks up the dugout steps. Something tells me no one had the guts to say anything negative about those V-shaped lambchops.

Finding a team card in your wax pack of cards was often a letdown unless it was your favorite team. Even then, you felt cheated out of getting a star player to add to your collection. At some point card companies stopped printing them, but coming across these relics today helps bring back memories like this card. No one had more colorful uniforms than the Astros. The Tequila Sunrise was bright and served as the team’s home and away jersey for several years. It’s a bold look you either love or hate; there is no in-between. I love it.

At 15, Cameron Smith owned a lively fastball. The ball didn’t split through the air so much as it fought and bucked against every molecule in its path as it traveled in excess of 90 mph. I know because I had the misfortunate of warming him up before one game while not wearing any protection. Nope. Not that either. In 1988, I played along with him and current Tampa Rays’ bench coach Matt Quatraro with Bethlehem’s Mickey Mantle team. Quatraro was one of Bethlehem Central’s best athletes. The way pitches jumped off his bat for home runs brought scouts to our games throughout his high school years. I could say that my time on the field was limited because our team consisted of two future professionals and a handful of college All-Americans, which is true, but it would also highlight an altogether different talent of mine to which I’m better suited for today.

Frenship caught lightning in a bottle with ‘Capsize’ and is now setting sail with new album, tour