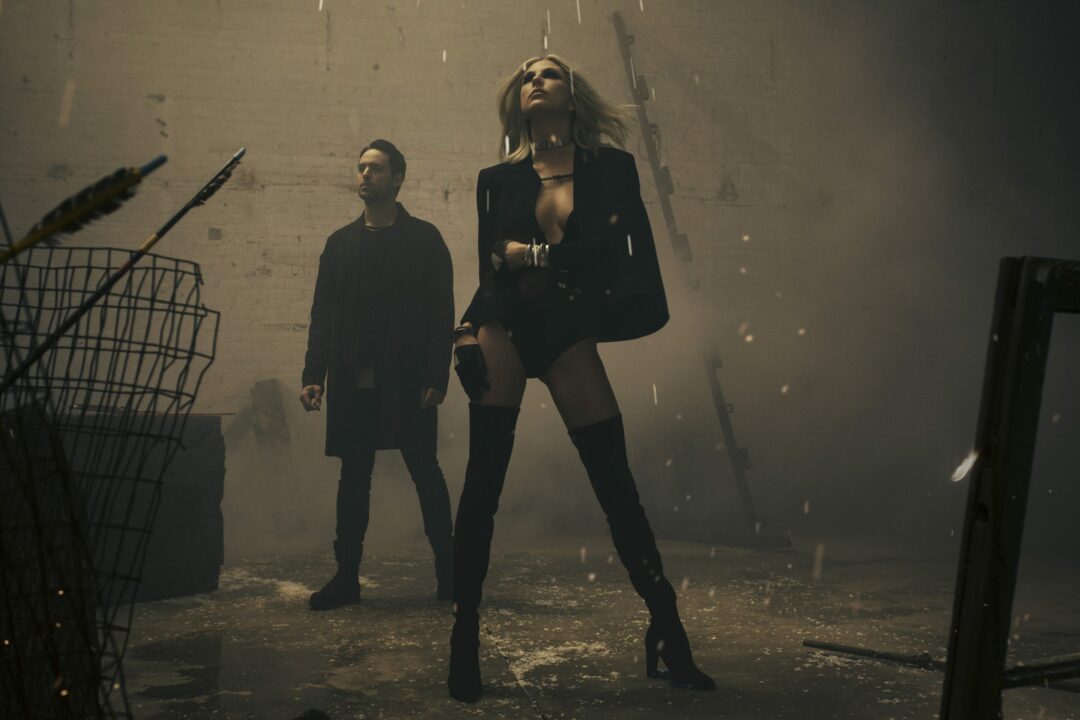 Josh Carter has been traveling the world so much that he dreams of being on the road.

“My girlfriend said to me the other day that I was sleep talking, and I was saying something about being in Singapore,” said Carter. “I’ve never been to Singapore.”

Give Carter and Sarah Barthel — better known as fast-rising alternative electronic pop group Phantogram — enough time and they may yet reach Singapore.

The duo from Greenwich recently wrapped up five months of constant touring in support of its new album, “Three,” with a series of East Coast club shows, including a sold-out show Saturday, Jan. 14 at Upstate Concert Hall in Clifton Park.

“I used to go to Hatebreed shows at Northern Lights (what Upstate Concert Hall used to be called,)” said Carter in a phone interview from Los Angeles, where he now lives. “I was really into hardcore back then.”

There is a harder edge to Phantogram’s songs than when Carter and Barthel started out as Charlie Everywhere in 2007. The breathy vocals and electronic soundscapes featured in early songs such as “Mouthful of Diamonds” and “When I’m Small” have been replaced with big beats and in-your-face vocals, as found in more recent hits as “Black Out Days,” “Fall in Love” and “You Don’t Get Me High Anymore.”

Carter said the change to a more aggressive sound was fueled in part by audience reaction to the band’s shows early in their career.

“I can’t cite a specific moment, but I remember people saying to us, ‘I love the music, but I can’t understand any of your lyrics because they were so buried in the mix,’” said Carter. “So, I think it’s a combination of playing live shows and gaining confidence.”

Carter also said collaborating with other artists helped Phantogram grow. A guest appearance on Big Boi’s 2012 solo album “Vicious Lies and Dangerous Rumors” led to a full-blown side project with the Outkast rapper called Big Grams that led to an EP in 2015. Phantogram also appeared on The Flaming Lips’ tribute album to The Beatles’ “Sgt. Pepper’s Lonely Hearts Club Band” — 2014’s “With a Little Help from My Fwends” — where Carter and Barthel tackled “She’s Leaving Home.”

“It’s been so much fun. It’s also been a learning experience,” said Carter. “Collaborating and playing music with others is always a good thing because you learn so much.”

Having the chance to work with Big Boi on Big Grams has been a dream for Phantogram, said Carter.

“We were heavily influenced by Outkast. In fact, Sarah and I call ourselves Aquemini (a title of a 1998 Outkast album) because Sarah is an Aquarius, and I am a Gemini,” said Carter. “We loved Outkast because it seemed like the sky was the limit for them. They could do something like a gangsta rap on one song, and then they’d have this cheerlead-y pop song like ‘Hey Ya.’”

Phantogram’s own discography maps out the direction the band has been heading. “Eyelid Movies” in 2010 — their first release for indie label Barsuk Records — was an expansion of its self-released EP from the previous year, which included “Mouthful of Diamonds.” In 2011, they released the EP “Nightlife,” which saw the beginning of the band’s transition from shoegazing electronic music to more sample-heavy hooks, as found on “Don’t Move.”

A couple of years later, Phantogram moved to Republic Records — a division of Universal Music Group that features artists such as Ariana Grande, Nicki Minaj and Drake, among others. The group’s first album for Republic, 2014’s “Voices,” brought their music to a more mainstream audience around the world. They started making regular appearances on such shows as “The Tonight Show with Jimmy Fallon,” “Jimmy Kimmel Live” and “The Late Show with David Letterman.”

“Three” marked another transition for Phantogram. The band exclusively worked with an outside producer for the first time, as Ricky Reed took the controls on the album. Outside songwriters including the-Dream and Tricky Stewart also collaborated on the album.

Reviewers had mixed feelings about “Three,” but Carter said the album is part of Phantogram’s continued growth.

“We’re not David Bowie. We’re not as brilliant as he,” said Carter. “But if we can have that one moment like David Bowie had with ‘The Thin White Duke’ and ‘Ziggy Stardust,’ that would be awesome.”

And as it edges closer to mainstream success, Phantogram is proving that a Capital District band can have an international following.

“I’m proud and happy to represent our home area,” said Carter. “It’s a testament that you don’t have to be from New York City or Los Angeles or Austin or San Francisco to be successful.”

Plimsouls are Back from the Valley