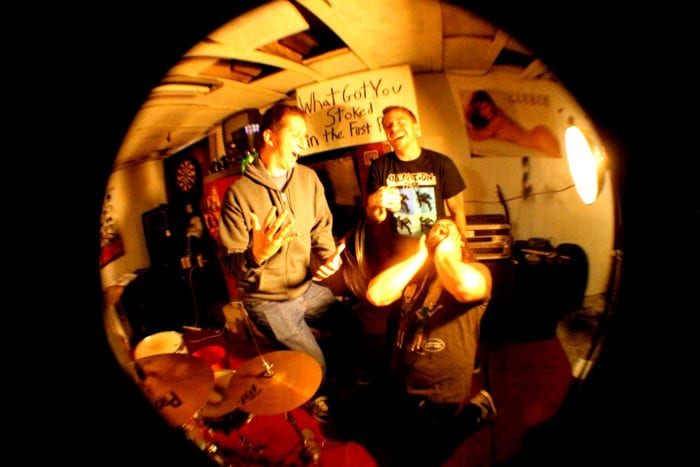 It was a side project that started out as a joke, but now the joke is kinda on them, as Girth Control continues to gain popularity. Photo by Sarah Winner

They thought their first show was going to be their only show, said members of local pop punk band Girth Control. “But we really surprised ourselves,” said Mark McKenna, the band’s drummer and its most vocal stage presence. “Because we kind of liked it, and other people liked it and that was the most surprising part.

“And it just keeps getting dumber,” he said proudly.

In other bands, agreed Girth Control’s guitarist and main lyricist Jay Bonafide, “You try to write songs with nuance and meaning and all that. We don’t do that.”

Conceived as a joke in 2014, none of the three band members expected the spontaneous project to last as long as it has—two years later, Girth Control has recorded an album, gone on a mini-tour to the Midwest, consistently books shows around the Northeast and, most importantly, is still having a damn good time. To watch the trio perform on stage is not unlike getting punched in the face by sheer dumb joy.

While they said that they don’t attempt to imbue their songs with any kind of meaning, all three musicians agreed that they’re able to achieve a certain amount of raw truth by virtue of not trying to achieve anything at all. They tend to draw on life experiences, said Watson, “so it’s this great combination of fun punk, but also a true story.”

“No one writes about the truth, you know what I mean,” said McKenna. “Everyone gets so clouded up in art that they forget about the reality of life—which is that it’s really pretty dumb.”

The band recorded its first album, “What Got You Stoked In The First Place,” last fall. The name, they said, as well as being the title of a track, is meant to evoke the feeling that they got when they first played together as Girth Control. “It was exhilarating,” said McKenna. “It still is.”

All three members also currently belong to another band that they consider to be a more serious project, but which has played out significantly less in the last few years. Watson, now 27, met Bonafide when he was only 15 years old and was going to see his first punk shows at Valentine’s on New Scotland Avenue in Albany. At that time, Bonafide, then 18, belonged to a band called Public Access, which announced at one of their shows that they were looking for a bassist. Watson, too shy to approach the band himself, was recommended by a friend and happened to have rehearsal space available in his parents’ basement. “I don’t know if they liked the way that I played or that I had somewhere to rehearse,” he laughed, sitting next to Bonfide in the only booth at The Low Beat on Central Avenue in Albany, which is owned by Howard Glassman, proprietor of the former Valentine’s. “But we’ve been playing together ever since.” (In just a few hours, the trio was preparing to play a set on the venue’s stage – the same stage from downstairs at Valentine’s where Watson and Bonafide met twelve years ago.)

McKenna met Watson and Bonafide several years later in 2009, when they were beginning a new project—the serious one—which they wound up dubbing The Slaughterhouse Chorus. “We were hitting it really hard there for a while,” said Bonafide. “We were going on tour and playing shows a couple of times a month, if not more. But we had to hit the brakes pretty hard, so [Girth Control] sort of filled in for that.” The brakes, he said, were necessary after another band mate opened a new business and had less time to rehearse and play shows.

It was when that band mate was unable to play a performance at the “Shred Shack,” a casual performance space where McKenna lived at the time, that Girth Control was, more or less, officially born. “We only had two weeks to put it together,” said Watson.

“We were like, let’s see if we can start a band in two weeks,” said McKenna brightly. It was he who came up with the name Girth Control almost ten years before finally finding the right vehicle for it. “We were trying to decide on a name for Slaughterhouse,” he remembered. “And I was driving through Scotia and, I don’t know, I must have seen a billboard or a Planned Parenthood, but I was suddenly just like, ‘Heh, heh. Girth Control.’ But that name was too stupid for that band—even though it was the only one we all liked—and so I sat on it for five years.”

That first six-song debut set comprised three punk/ska covers and three original songs. Now, they say they have too many original songs and don’t see an end in sight. “We keep writing songs because it keeps coming out of us,” said Watson. “For some reason, they just keep coming out.”

“I expected this to stop being fun a long time ago,” said McKenna. “It still hasn’t.” The only song they cover now, he said, is a Loverboy song, “Which we’ve basically made our own,” he said. “Because we changed a word to ‘girthin’.’” McKenna grinned. “And we tried to cover “I Can’t Drive 55,” by Sammy Hagar once. But it was terrible.”

“But even when it’s bad it’s pretty great,” said McKenna. “That’s the beauty of this band. It’s almost like the worse it is, the funnier and better it is.”

The band recently played a show in Boston, Mass. and were clearly taken aback by the enthusiastic reception they met with there. “People loved us and it was insane,” said McKenna. “Because it was supposed to be this really dumb thing and now we’re selling out of CDs! It’s cool to have people heckle you in the crowd and laugh when you say something dumb.”

The title song to their album, they said, speaks to their ethos as a band. “It’s like our mission statement,” said McKenna. “It’s just about, like, getting back to your roots and not forgetting why you’re playing music in the first place, which is to have fun with your friends and hang out and take a break from the boringness of adult life. It’s still silly, but it’s probably our most serious song because the message behind it is about being true to yourself and not losing that childhood innocence and dumbness that you try so hard to not let people see.”

But their favorite song, all the band members seemed to agree, is called “Alright Mom (You F**ng Poser).” In their rehearsal space, the band has “a lot” of white boards (“Maybe not quite ten, but close,” said Watson) on which they like to write the dumb ideas that they hope will eventually become songs. “And we wrote that up there,” said McKenna. “Just because we though it was this funny, stupid pseudo-rebellious angsty dumb thing. And we mulled it over for a couple of weeks and then Jay comes back with some lyrics.”

“Everyone had a real example,” said Bonafide. “And there was just one day where it all came to me in like 20 minutes. That’s usually how it happens.”

“I like it because it starts with a sweet bass part,” said Watson. “But also because it really did start with just this stupid thing that we put on the white board and then we all sat around and thought about reasons why our moms are posers. Like, there’s this verse talking about how my mom threw away my Operation Ivy T-shirt, and that’s a true story.”

“It’s like getting back to being 15 years old and getting mad at your mom for throwing something away—when she busts her ass every day just so you can have dumb s#!t like a T-shirt or a pair of AFIs.”

Girth Control plays out in the Capital District often, usually once or twice a month at venues like the Low Beat and Parish Public House, and say that they intend to enjoy the ride as long as possible. “It just keeps coming out of us,” repeated Watson, who, along with the rest of his band, still seems surprised that their creative process has been as effortless as it is.

“As long as there’s music on the table, we gotta keep recording,” said Bonafide, who said he also wouldn’t mind playing Warped Tour next year.

“I think that,” said McKenna, “probably, by 2018, we’ll have a Grammy. They’re actually going to change the Grammy to be, like, a beer bong. They’re going to call them Girthies.” He laughed. “This is getting really dumb.”

“No, really,” he said. “I’m going to take Girth Control as far as the world will let me. As long as anybody gives a s#!t at all and I can still have fun, then there’s no end in sight. I don’t know why there would be.”

Playhouse hits it big: Lots of flash and ‘All That Jazz’ in ‘Chicago: A Musical Vaudeville’