Playhouse hits it big: Lots of flash and ‘All That Jazz’ in ‘Chicago: A Musical Vaudeville’ 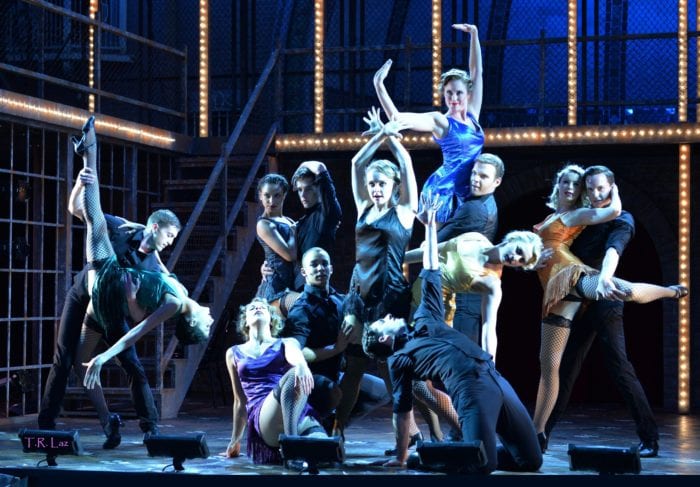 ALBANY — The “Overture” kicks the music into gear, and the choreography makes flesh famed Fosse moves. Shoulders dips as the trombones do, the syncopation of the anticipation of move fun to come.  Musical director Brian Axford has his 13-piece orchestra pulsing bluesy jazz and jazzy blues, and Park Playhouse’s suitably adult “Chicago: A Musical Vaudeville” moves along after Matron Mama Morton (a delicious bawdy Molly Rose McGrath) smartly applied her riding crop across the cheeks of PPH Artistic Director Owen Smith as he turns to leave the stage immediately after his welcoming address amidst the performers stretching and arching.

And when “All That Jazz” slides into place and builds and builds, director Michael LoPorto’s production hits its stride (and, in retrospection, its high mark).  Vertically, horizontally, or diagonally, PPH’s company sing the heart and pelvis out of “All That Jazz.”

From its 1975 original Bob Fosse production to the 1996 Broadway revival that is still filling seats with its rolling bevy of guest-star celebrities to the just opened at Lincoln Center Japanese production (not to mention the Academy Awards for the 2002 movie version), Chicago has legs.

The ensemble work on this hot hit musical captures the spirit of the show, and “The Cell Block Tango” followed by “When You’re Good to Mama”—“If you want my gravy/ Fezzle my Ragu/Spice it up for Mama/She’ll get hot for you” should be on every fine dining menu — almost match the excellence of “All That Jazz.”

As “vaudeville” has its etymology in satirical songs, “Razzle Dazzle” makes full use of cynical lawyer with a smile of gold Billy Flynn (silver fox Rick Roemer), aptly supported by the ensemble with enough contortions and flips and silky quips: “Give ‘em the old flim flam flummox/ Fool and fracture ‘em/  How can they hear the truth above the roar?”  All that’s needed is an orange combover and bold gold font to make PPH’s “Razzle Dazzle” a presidential campaign song.

Thoroughly adult and ably done, Park Playhouse’s Chicago: A Musical Vaudeville “gives ‘em an act with lots of flash in it,” and that’s the Chicago-way.